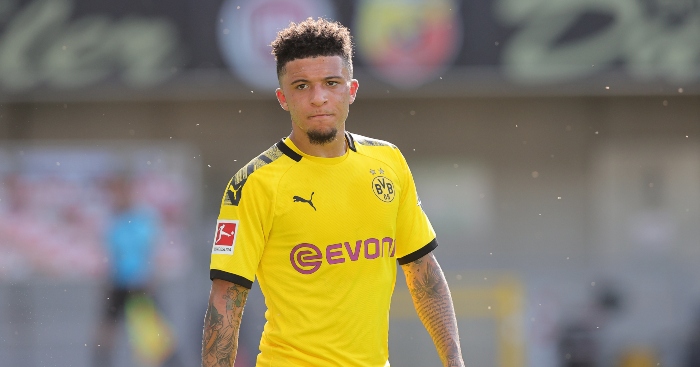 Borussia Dortmund’s Jadon Sancho has been linked with a summer switch to Manchester United – but how would the forward fit in at Old Trafford?

Sancho has become one of the most sought-after players in world football and would reportedly cost in the region of £108million.

We’ve compared the 20-year-old’s Bundesliga stats from 2019-20 to the corresponding Premier League stats for United’s Marcus Rashford, Daniel James, Anthony Martial and Mason Greenwood. Odion Ighalo has not been included due to his lack of minutes in the Premier League.

Sancho has registered 17 goals and 16 assists in 32 Bundesliga appearances in 2019-20, his best-ever tally in a single season.

Of Ole Gunnar Solskjaer’s attacking options, Rashford unsurprisingly leads the way with 17 goals and seven assists at a rate of one every 110.6 minutes.

Martial has a record of 17 goals and six assists, averaging one every 114.7 minutes, while Greenwood has contributed 10 goals and an assist at an average of one every 119.3 minutes.

James is the furthest behind, he has provided three goals and six assists, averaging of a goal or assist every 254.6 minutes.

Every single Sancho goal and assist in the Bundesliga this season 🤤pic.twitter.com/hdrNU1nFwN

That places him way ahead of United’s current options. Rashford creates 1.1 chances per 90 with Martial, Greenwood and James all on 1.0.

Noted for his ability to beat opposition players, Sancho completes 3.0 successful dribbles per 90 minutes at a success rate of 55.5%.

Forwards aren’t renowned for their defensive work-rate, and Sancho’s average of 0.5 tackles per 90 minutes betters only Rashford (0.4).

Greenwood (1.2) and James (0.8) both post higher averages than Sancho while Martial also recorded 0.5 tackles per 90.