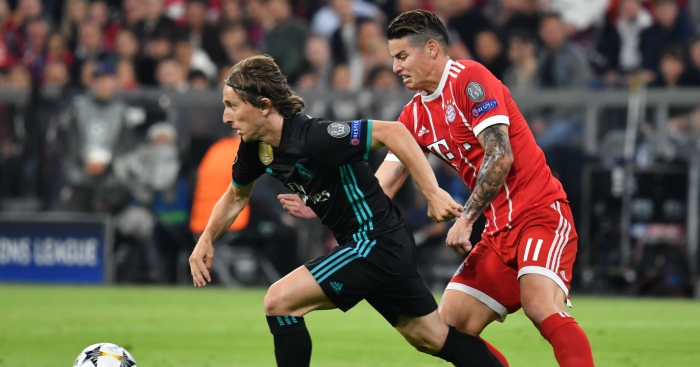 Rodriguez had failed to live up to expectations at Madrid, after joining from Monaco following an impressive string of performances at the 2014 World Cup in Brazil.

The midfielder moved for £63million but started just 30 times in La Liga in the two seasons that followed his debut campaign and was sent on loan to Bayern last summer.

After a slow start, he rediscovered his best form under Jupp Heynckes, and as he prepares to face off against his parent club in the Champions League, we’ve taken a look at the stats to see if Zinedine Zidane was right to let him leave so easily.

No Madrid midfielder has more league goals this season than Rodriguez’s six.

In fact, Gareth Bale and Cristiano Ronaldo are the only members of the Madrid squad to score more than the Colombian, though fellow midfielder Isco is also on six league goals.

Casemiro has scored five times, Toni Kroos has bagged four and Luka Modric just once so far in La Liga this term, as Real have limped towards a late challenge with rivals Atletico for second place.

Per 90 minutes, Rodriguez has the best record, scoring 0.37 times per 90 minutes of football this season, with Isco’s 0.33 coming the closest to him.

James Rodríguez, Bayern midfielder: "It's great to be back at the Bernabéu again. I won't celebrate if I score tomorrow [against Real Madrid]." #UCL pic.twitter.com/WYPXflipvh

Rodriguez has also registered 10 assists in the league this season, which is more than any Real player has managed.

Of his fellow midfielders, Kroos and Isco have both created six goals, Modric five and Casemiro three.

All have also played more minutes than Rodriguez, who averages 0.62 assists per 90 minutes. This means he averages a goal or assist 0.99 times per 90 minutes of Bundesliga action.

Isco once again comes closest when averaging the number of assists made per 90 minutes but is still a long way behind with 0.33. Kroos averages 0.27 assists per 90 minutes, Modric 0.26 and Casemiro just 0.12.

Real Madrid players to create a chance in the first half vs. Bayern:

James Rodriguez (3) created as many for Bayern on his own. pic.twitter.com/l6Si9jeSw2

Rodriguez attempts 77.9 passes per 90 minutes of league football, bettered only by Kroos, who plays an average of 81.8.

Isco has the next-highest average with 76.5 attempted passes per 90 minutes, while Modric plays 69.3 and Casemiro 60.4.

Rodriguez plays 69.9 accurate passes per 90 minutes, with a success rate of 89.7%. As expected, Kroos plays more accurate passes with 75.9, and also has a superior completion rate at 92.7%.

When it comes to creating chances for team-mates, Rodriguez once again comes out on top, averaging 3.4 key passes per 90 minutes in the Bundesliga.

Kroos and Isco both have an average of 2.5 per 90 La Liga minutes, while Modric creates 1.7 chances, and Casemiro 0.9.

‘Enjoyed’ James tonight in a deeper role for him. He funnelled a lot of Bayern’s possession, had the most touches of anyone in midfield, had the best passing accuracy on the team, and conjured four key passes.

Isco, who has made most of his appearances in the attacking midfield position, completes the most dribbles of the bunch, averaging 2.7 per 90 minutes.

Rodriguez completes just 1.1 dribbles per 90 minutes, with a completion rate of only 37.5%.

The Colombian also averages 1.2 unsuccessful touches per 90 minutes, which is worsened only by Isco who averages a huge 3.3.

Modric takes 1.0 unsuccessful touches per 90, Casemiro 0.8 and Kroos 0.7, and it’s a similar story for the average number of times each player is dispossessed per 90 minutes.

Rodriguez and Modric are both dispossessed 0.9 times per 90 minutes, with Kroos averaging just 0.4 times.

Casemiro averages a deeper position than the other players, therefore it could be expected that he leads the way with 3.6 tackles per 90 minutes as well as 2.2 interceptions.

Next best on tackles is Kroos, who makes 2.2 successful tackles per 90 minutes, with Rodriguez just behind on 2.1.

Been really impressed with James Rodriguez's defensive work rate, pressing & covering in midfield. We know his technical excellence but his off the ball work has been really good.

Modric averages 1.6 completed tackles per 90, with Isco making just 1.2. The Spaniard also completes the fewest interceptions, joining Kroos and Rodriguez on 0.7 per 90 minutes.