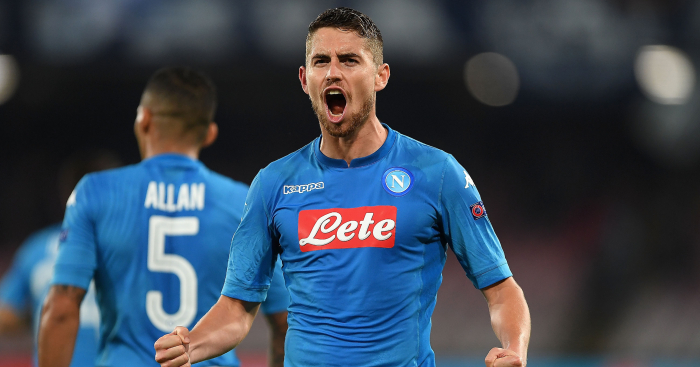 New Chelsea manager Maurizio Sarri has wasted no time in making his first signing at the club, with midfielder Jorginho following him from Napoli.

The announcement that Jorginho had opted for a move to Stamford Bridge as opposed to joining Manchester City came just three hours after it was confirmed that long-term target Sarri had replaced Antonio Conte in the Chelsea hot-seat.

We’ve taken a look at the stats to compare the Italy international to Chelsea’s current crop of midfielders: N’Golo Kante, Cesc Fabregas and Tiemoue Bakayoko.

All being sitting midfielders, goals are few and far between among the quartet, Kante scoring once last season while Fabregas and Bakayoko equalled Jorginho’s effort of two Serie A strikes.

France midfielder Kante also only managed one assist throughout the 2017-18 Premier League season, while Bakayoko created two goals during his debut campaign in English football.

Once again, Jorginho and Fabregas are level, each of them creating four league goals during last season.

In terms of being directly involved in a goal, Kante is way behind at one every 1,499 minutes, while Bakayoko averages a goal or assist every 531.5 minutes.

Fabregas ended last season being directly involved in a Premier League goal once every 384.8 minutes, slightly better than Jorginho’s one every 444.2 minutes in Italian football.

City furious about Jorginho situation. Claim Napoli bullied him into going to Chelsea and said they'd force player to see out last two years of his contract if he didn't go there. Napoli 'unprofessional' and City 'never seen an agreement reneged on like this before'.

Jorginho in fact ended last term with a better passing accuracy than any of the three Chelsea men, with 89.5% of his passes finding a team-mate, narrowly edging out Kante’s 89.3%.

Bakayoko, who has been linked with a transfer after just 12 months at Stamford Bridge, had an 86.2% pass completion rate, while Fabregas’ was 83.5%.

However, over the course of the season, Bakayoko averaged just 46.9 passes per 90 minutes, while new signing Jorginho averaged an incredible 108.

Key passes are determined as a pass which sets up a team-mate for a shot – and Fabregas finds himself way out in front.

The Spaniard averaged 3.5 key passes per 90 minutes last season, two times better than any of the three other midfielders.

Jorginho was next best, creating 1.7 chances per 90 minutes last season, while Kante averaged 1.2 and Bakayoko just 0.7.

2860 – Jorginho completed 2860 passes in Serie A last season (33 appearances); the most of any player within the Top 5 European Leagues in 2017/18. Maestro. pic.twitter.com/ilxvAPFNSO

As would be expected, Kante leads the way when it comes to defensive statistics, completing 3.4 tackles and making 2.6 interceptions per 90 minutes last season.

Fabregas and Bakayoko both averaged 2.7 tackles per 90 minutes in the Premier League, the former making just 0.9 interceptions, while his French team-mate averaged 1.6 per 90 minutes.

Jorginho completed the fewest tackles of the quartet, averaging just 2.1 per 90 minutes in Serie A, but he also made 1.7 interceptions per 90.