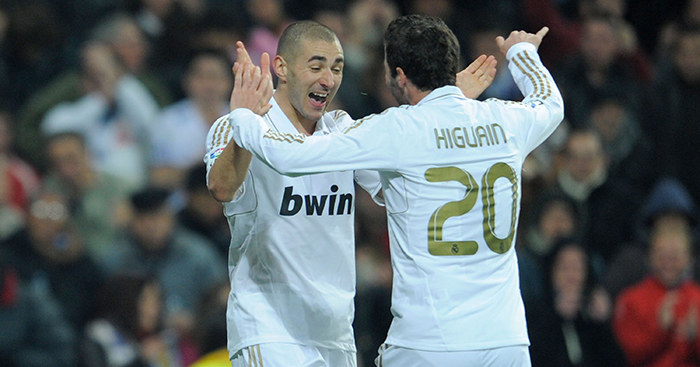 In the summer 2013, reportedly at the behest of Cristiano Ronaldo, Real Madrid sold Gonzalo Higuaín to Napoli. But the question is, nearly five years later, did they sell the right striker?

There is never a shortage of ongoing debates over who is the better striker, whether it is a comparison between players on the same club, competing league teams, or even different leagues.

For Gonzalo Higuaín and Karim Benzema, the debate has continued long after the four seasons they shared at Real Madrid between 2009 and 2013 until the Argentine was moved on.

He had scored 18 goals in 44 appearances for Real in 2012-13, compared to 20 in 50 for Benzema, but in reality to sell Higuaín rather than Benzema was a matter of fate.

There have been reports that Ronaldo had a big part to play, claiming Higuain didn’t pass the ball enough, but even if true it’s unlikely Florentino Perez would have put up much of a fight.

Higuaín, you see, had been signed by the club’s previous president, Ramón Calderón, for a paltry €12 million from River Plate, whereas Benzema was one of Perez’s first signings, along with Ronaldo, Kaká and Xabi Alonso, in his first summer after being re-elected. 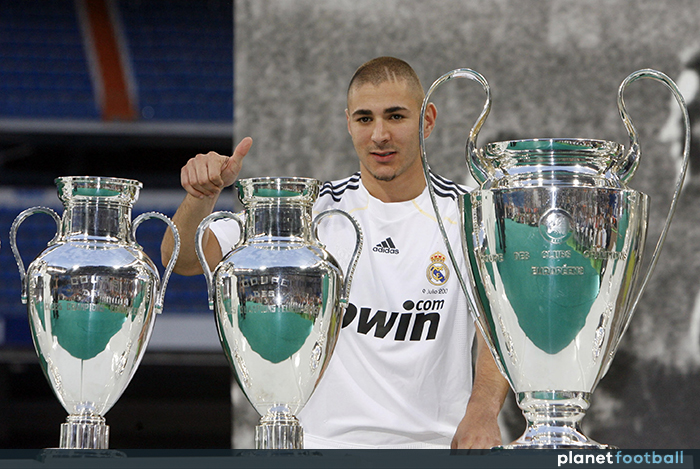 That, in many people’s eyes, damned Higuaín and explains why he played second fiddle to Benzema during their time together at the Bernabéu. He was never considered to be an authentic Galáctico.

Everyone has their own opinion on whether Real were right or wrong to sell Higuaín over Benzema, but what we lack is a compelling evaluation based on actual performance metrics.

So, let’s do that. Using a dozen or so different metrics, here’s how Higuaín and Benzema’s performances have compared over the last almost-nine seasons since the start of 2009-10. Did Real back the right striker?

Non-Penalty Goals: Right throughout the comparison, Higuaín has scored at a rate that has consistently overshadowed that of Benzema.

Even at Real Madrid, his average over the four seasons was 37 per cent higher than Benzema (18.8 to 13.8 goals per season) even though his minutes were reduced toward the end of his stay with the club.

In total over the comparison, Higuaín averages a shockingly good 119 minutes between goals while Benzema’s scores one every 142 minutes.

Open Play Shots and Shots on Target: The issue of not being discriminating enough about his shots has often plagued Higuaín while, at the same time, insinuating that Benzema is not selfish enough.

Their shots-on-target accuracy, meanwhile, is almost identical, with Higuaín averaging slightly higher (59.7% to 58.7%).

Shot Selection and Finishing Ability (G/xG): The ubiquitous G/xG metric reveals that both the shot selection and ﬁnishing ability of Benzema and Higuaín are superior to most.

Benzema is 1.55 times better than the average goal scorer while Higuaín is 1.93 times superior, i.e. they both perform above the average of a group that includes players from all league positions (based on WhoScored data).

Dribbles: Higuaín averages 2.9 dribbles per 90 compared to Benzema’s 1.9. Their success rate of dribbling was about the same at 50%.

However, neither metric could be considered strong when compared to, for example, Hazard, Neymar, Messi, or Zaha who average 4-7 dribbles per 90 minutes.

Chances Created: Benzema is certainly the better of the two players when it comes to providing for his team-mates.

His size and on-the-ball skills allows him to control play with his back to the goal while other players move into more advantageous position for improved shooting opportunities.

Passes Completed in Final Third: Possibly one of the most important metrics for a striker beyond chances created and goals scored is the ability to effectively distribute the ball in the final third of the pitch.

Benzema completes more passes per 90 minutes – 26 to 20 – and is more accurate – 84% to 80% – than Higuaín. Possibly even more important is his efficiency in passing in the attacking third where he completes 13 passes per 90 compared to Higuaín’s eight.

In using a composite measure of interceptions, tackles and aerials won, neither Higuaín nor Benzema excel in this regard.

However, Benzema still outperforms Higuaín by making 33% more defensive contributions: 1.6 to 1.2 per 90 minutes.

Injuries have been of considerable concern for Benzema.

All forwards suffer niggling bumps and bruises, and their ability to “come back” quickly is of vital importance to their club. But Benzema has suffered chronic injuries and, worse, they have occurred more frequently lately.

Accordingly, his down time is more prevalent over the past three seasons – as he has approached and passed the cautionary striker milestone of 30 years old, when the bones hurt and the joints start to sound like popcorn.

Benzema has played under 60% of all minutes for Real Madrid – some of the lost time caused by injury and some by team selection, while over the same time period Higuaín has averaged closer to 80% of the minutes. 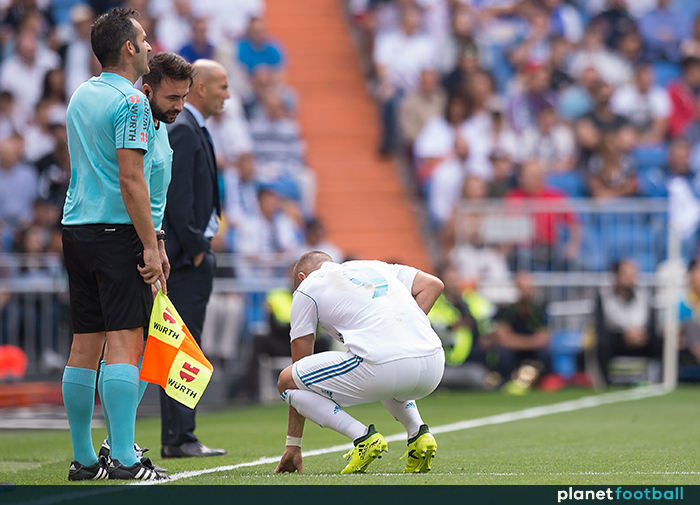 Both Higuaín and Benzema are extremely talented, albeit dramatically different centre forwards.

Higuaín is a classic No.9 striker. He is tough, relentless, hardworking and clinical. He is deadly inside the box and incredibly skilled at making startling, diagonal runs between defenders that allow him to find space and scoring opportunities out of nowhere.

He also has the ability to take instantaneous, seemingly awkward shots across his body without hesitation that surprise and often catch defenders without warning.

In short, Higuaín is hell-bent on scoring goals. It is what he was born and DNA-programmed to do.

However, there are no bells or whistles. He doesn’t excel at tracking back. And for some, he has never been quite enough.

Benzema is far more graceful in movement with better ball skills than Higuaín. Although he does not score as many goals for himself, Benzema is far better at creating opportunities for other attacking players by being clever at playing with his back to goal and by distributing the ball to others over larger areas of the pitch.

He also gets more involved in build-up play than Higuaín and passes more accurately when he does. 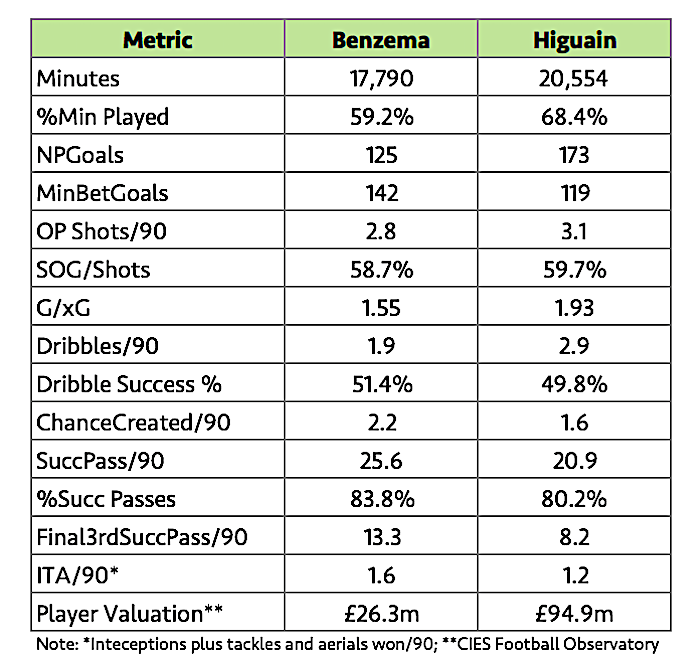 When you are sharing a pitch with Ronaldo, it is not difficult to understand why Real Madrid preferred to keep the more creative player. One whose focus would be just as much on providing for team-mates as it would be scoring goals himself.

But now, as Ronaldo’s clock is slowing down, however slightly, and Benzema is struggling to keep his contributions to the team at an acceptable level, there are more than a few who wished it was Higuaín still at the Bernabéu.

Benzema or Higuaín. Higuaín or Benzema. The debate will not go away.