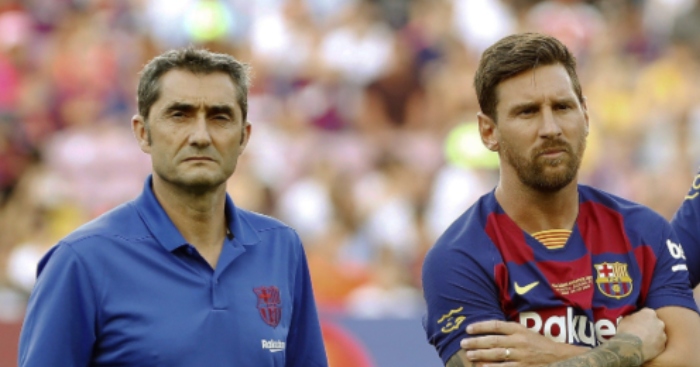 As Quique Setien replaces Ernesto Valverde as Barcelona manager, it’s time for one of the usual big questions – what might this mean for Lionel Messi?

Barca have been as reliant as ever on their star man this season, with big-money summer signing Antoine Griezmann still some way off the form he was showing at his Atletico Madrid peak, but Messi has continued to deliver.

Messi has scored 13 goals in 14 league games this season, continuing to defy those who expect him to slow down to a normal player’s pace at some point, and we can’t help but feel we’ve been here before.

Since the departure of Pep Guardiola – the man under whom Messi was close enough to unstoppable – Barcelona have now cycled through four managers, with Setien the fifth.

We’ve taken a look at Messi’s La Liga and Champions League output under all four – Tito Vilanova, Tata Martino, Luis Enrique and Ernesto Valverde – to see how he’s got on.

Bear in mind this is a Messi moving into his 30s, and therefore a man who should be on the wane, at least based on what normal, non-superhuman players tend to do in their careers. As you probably guessed, though, you don’t need to anticipate Messi dropping off too much – averaging at least one goal every 90 minutes under each of these managers tells you all you need to know on that front.

The Champions League is back, Lionel Messi is back, and he spoiled us tonight with a wonderful hat-trick 😍 pic.twitter.com/AJMwjAGkSp

I’m sure the thought of Barca/Messi vs Getafe makes all of us think about the incredible ‘goal of the century’ style goal Leo scored in 2007, but this goal from 2014 is one of his most underrated:pic.twitter.com/5WDkat5bBU