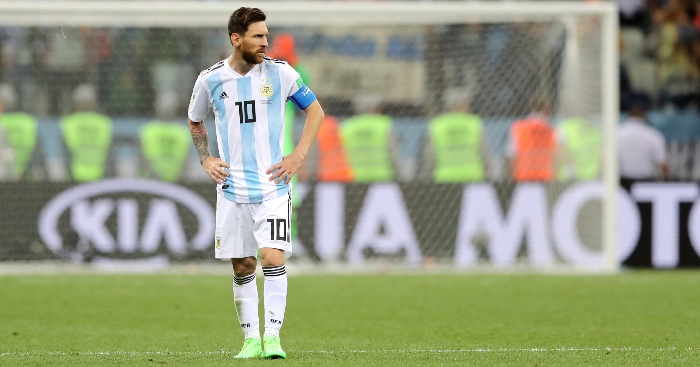 Lionel Messi has suffered another heartbreaking World Cup campaign – but in very different fashion to in 2014.

Messi helped Argentina to the final four years ago, winning the Golden Ball award for the best player, but it was ultimately scant consolation as Germany lifted the trophy in Brazil.

No doubt hoping to go one better at this year’s World Cup in Russia, Argentina are instead facing a battle to make it beyond the group stage having taken only one point from their opening two games.

Messi failed to make much of an impact in either the 1-1 draw against Iceland or 3-0 defeat to Croatia, but in fairness he has hardly helped by the performances of those around him – especially in the latter.

We’ve compared his stats to Argentina’s other attacking players to see whether Messi deserves the criticism that has come his way in recent days.

Well, this one shouldn’t take too long: Sergio Aguero is the only Argentine to net at this World Cup, scoring his 36th international goal in the draw against Iceland.

Messi, however, has been a prolific goalscorer for his country despite not even being an out-and-out forward, scoring a record 64 goals for La Albiceleste.

Aguero is third on the all-time list with 37, Gonzalo Higuain has 31, while Paulo Dybala is yet to break his international duck. But with Argentina disappointing, it’s Messi who shoulders most of the blame.

Aguero and Higuain have both created one each, while Dybala is yet to set up a team-mate in his 22 minutes on the pitch. Maximiliano Meza, who has started all three games in attack, has created six chances, the most in the Argentina squad.

Meza had the lowest passing accuracy over the two games (78.2%), however, with Messi not actually far behind (82.4%). Aguero shades Messi with 83%, while Higuain (100%) and Dybala (90%) have been efficient with their passing as substitutes.

Messi, of course, is well known for it’s his excellent dribbling ability, and there’s no surprise that over the two games he leads the way by a distance in this regard with 13 successful dribbles, showing he was at least trying to make something happen.

Meza completed four dribbles over the two games, while Aguero completed two and Higuain one in his 42 minutes.

Argentina have won one qualifying match without Lionel Messi.

Before Sergio Aguero scored against Iceland no one had scored a competitive Argentina goal without Messi's involvement for 600 days. pic.twitter.com/CRIoPgJhcb

We were actually quite worried to look these up after witnessing the catastrophe against Croatia.

If you were asked to name a weak point of Messi’s you’d probably argue defending, but his three tackles across the two games is actually more than all but four of his team-mates.

Nicolás Tagliafico and Javier Mascherano only made two each despite also playing all 180 minutes and, y’know, unlike Messi actually being in the team to stop attacks.

Aguero also made three tackles, but Meza has made only one so far, while Angel Di Maria didn’t win a single one in his start against Iceland.

Over the course of the two games, Messi has taken the flack as he always does. Rightly or wrongly, the criticism will always fall at his feet no matter how the rest of his team perform.

However, despite the negativity surrounding Argentina’s main man, the stats suggest there are players in the team far more deserving of criticism.