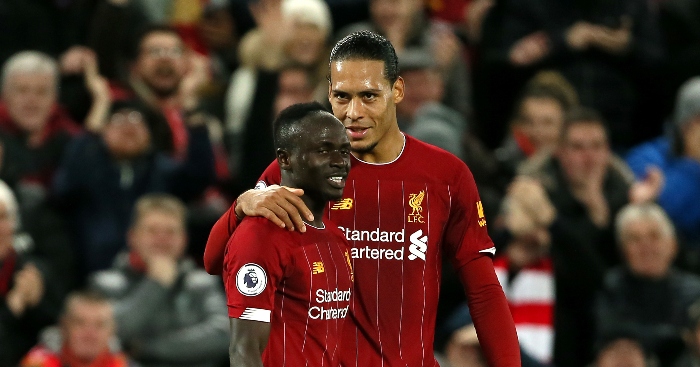 Liverpool have opened up one of the biggest Christmas leads in Premier League history, but their fans will tell you it isn’t over until it’s over.

Jurgen Klopp’s team are 10 points clear of second-placed Leicester City, with a game in hand to boot – only Newcastle, in 1995-96, have led by as big a margin at this stage and failed to win the title.

We’ve gone back through the last decade to see how Liverpool’s current tally of 49 points from 17 games compares to previous champions.

Chelsea needed to wait until the final game of the season to seal the title under Carlo Ancelotti, but they were a little further ahead at Christmas.

The Blues were four points clear of Manchester United after 18 games, having already recorded one 5-0 victory and two 4-0s.

Just like Liverpool’s current crop, Sir Alex Ferguson’s Manchester United had yet to taste defeat when Christmas rolled around in 2010.

However, what was less impressive was: (a) they’d played one game fewer, and (b) seven of their 16 games were drawn.

Thirty-four points was still enough to put them two points clear of nearest challengers Arsenal and Manchester City, with one game in hand on the former and two on the latter. By the end of the campaign, the margin had grown to nine.

10 – @LFC lead the Premier League table by 10 points; in English top-flight history only one team with a 10+ point lead on Christmas Day has failed to win the title (Newcastle in 1995-96). Cheer. pic.twitter.com/ctM7iGdtAN

By Christmas 2011, City fans were starting to believe the title might be theirs. Well, they would have been if they hadn’t developed a tendency towards pessimism after *gestures at club’s entire pre-2011 history*.

Roberto Mancini’s men were two points clear of neighbours United, having picked up 44 from a possible 51, and had only recently suffered their first defeat of the season when Chelsea’s Frank Lampard converted a late winning penalty at Stamford Bridge.

One point from games against West Brom and Sunderland just after Christmas saw things tip back in United’s favour, but those points picked up before Christmas certainly helped come May.

Fergie’s final season was only going to end one way, and the newly Van Persie-ed club were already four points clear at Christmas.

The Red Devils had lost to Everton, Tottenham and Norwich, but 14 of their other 15 games ended in victory.

The drama at the end of the 2013-14 season was the natural conclusion of an extremely tense campaign, in which four clubs were in serious contention for the title right up until February.

Eventual champions City weren’t even top at Christmas, the first on this list to whom that applies, but there wasn’t a lot in it at all: just two points separated the top five after 17 games: Liverpool had 36, as did Arsenal. City were on 35, with Chelsea and Everton just one point further back.

Not only were City not top at Christmas, but they only occupied top spot for three weeks all season: the first one and the last two.

Compared to the tension of the previous campaign, Chelsea’s 2014-15 run was a procession.

Jose Mourinho’s side lost just one of their first 17 games, a 2-1 reverse at Newcastle in early December, and had won eight out of eight at home to sit three points clear of Manchester City with 42 points.

A New Year’s Day reverse at White Hart Lane threatened to derail their title charge, but the 16-game unbeaten run which followed made us all feel very foolish. They ended the season eight points clear of the chasing pack.

Leicester’s title win in 2016 was a surprise, but it was no fluke, and the standings at Christmas reflect that.

The Foxes lost just once before Jesus’ birthday, a 5-2 reverse at home to Arsenal, before riding a Jamie Vardy goalscoring wave to win eight out of 10 until their next defeat arrived on Boxing Day.

A Christmas tally of 38 points from 17 games gave Claudio Ranieri’s team a two-point lead, but their final tally of 81 brought a comfortable title as their rivals fell away one by one.

Antonio Conte’s Chelsea had one of the biggest Christmas margins this decade, picking up 43 points from 17 games to sit six ahead of second-placed Liverpool.

The feat is even more impressive considering they were down in eighth after six games before embarking on what would eventually become a Premier League record 13 straight wins (later superseded by Manchester City).

13 – Chelsea have equalled the @PremierLeague record for the most successive wins within a single Premier League season. March. pic.twitter.com/yeN7nrPPVl

City’s centurions are the only Premier League side this decade to be further ahead at this stage than Liverpool’s 2019-20 class.

Pep Guardiola’s team approached the halfway point with 55 points from 19 games, 13 points clear of second-placed Manchester United, with Everton the only team to deny them victory.

Forty-four points from 18 games would have been enough for top spot most seasons, but Liverpool were unbeaten on 48 in what would prove to be a ridiculously high-quality title race.

City lost again on Boxing Day, Ricardo Pereira scoring Leicester’s late winner, but secured the title by a point after winning 18 of their last 19 games.