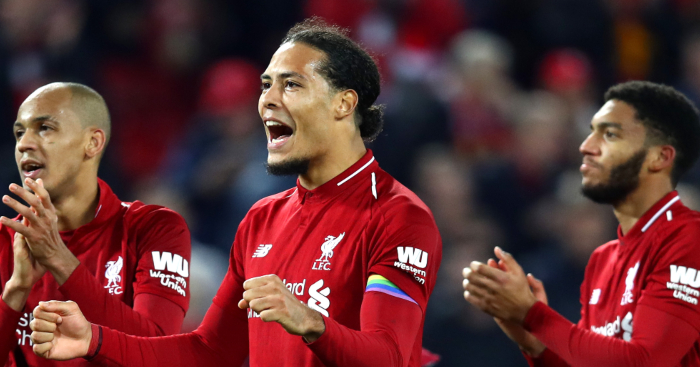 Liverpool have their destiny in their own hands as they enter the final 12 games of the season, but a couple of injury concerns could harm their chances.

Second in the table, Jurgen Klopp’s side would move ahead of Man City if they can win their upcoming game in hand against Manchester United.

But will injuries scupper them? Here’s what they’ve suffered this season and how that compares to recent champions.

The injuries have largely hit the defence this season, with the midfield and attack staying consistently fit.

Roberto Firmino and Mohamed Salah have featured in every league game so far, starting the vast majority, while Sadio Mane has only missed a couple through injury.

In midfield, new signings Naby Keita and Fabinho have been sidelined for short spells, as have the longer-serving James Milner and Jordan Henderson, but they’ve had the depth to cope, especially with Georginio Wijnaldum featuring for all but three matches so far.

The signing of Xherdan Shaqiri has helped with the long-term absence of Alex Oxlade-Chamberlain, who could potentially return for the final stretch of the season but has missed the entire campaign so far after rupturing knee ligaments in last season’s Champions League semi-final against Roma.

At the back, key men Alisson and Virgil van Dijk have started every single league game so far, playing almost every minute, while Andy Robertson has missed just one game through injury.

However, after establishing himself as Van Dijk’s best central defensive partner, Joe Gomez has missed the last 10 matches through a lower leg fracture and some reports have suggested he could miss the rest of the campaign.

Dejan Lovren missed the first seven games of the season after struggling following Croatia’s World Cup campaign and has only intermittently featured since, while Trent Alexander-Arnold has missed five games through injury.

Sergio Aguero missed the final weeks of the season, but only after the title had been wrapped up, while Pep Guardiola always had one of him or Gabriel Jesus available.

City had comparable defensive injuries last season, with the injury-prone Vincent Kompany out for long stretches as well as John Stones, but with Otamendi and January arrival Aymeric Laporte they had more depth to cover.

The long-term injury to £52million signing Benjamin Mendy forced them to improvise, with Fabian Delph and Oleksandr Zinchenko deputising at left-back.

Like Leicester City before them, Antonio Conte’s Chelsea massively benefitted from the lack of European distraction and was able to call upon the same XI for the vast majority of their title-winning campaign.

A big part of Leicester’s miraculous title win was keeping all their key figures throughout.

Claudio Ranieri made some changes in the early weeks of the season but soon settled on a favoured first team. Kasper Schmeichel and Wes Morgan started all 38 games of the campaign, while Robert Huth missed just one game through suspension before they wrapped up the title.

It’s the same story for the rest of that now-iconic XI, as the likes of N’Golo Kante, Riyad Mahrez and Jamie Vardy also featured throughout.

Eden Hazard started all 38 games as he was named Player of the Season as Chelsea won the title under Jose Mourinho.

That season the defensive unit of Cahill, Azpilicueta, John Terry and Branislav Ivanovic were ever-present alongside Matic and Courtois. Costa missed a six-game stretch towards the end of the season, but the Blues had already established an unassailable lead at that point.

John Obi Mikel, Ramires and Oscar all faced short spells on the sidelines but Mourinho had no major injury headaches to deal with that year.

Manuel Pellegrini had to deal with more injuries than any other recent title winner, but he also had enough depth to compensate.

Aguero and Stevan Jovetic were both absent for long spells, but Edin Dzeko and Alvaro Negredo were capable stand-ins.

At the other end of the pitch, Kompany and Nemanja Nastasic spent long stretches on the sidelines, albeit rarely at the same time, while Joleon Lescott and Martin Demichelis were around to contribute.

In midfield, Fernandinho and Milner were fit throughout. Yaya Toure enjoyed arguably the best individual campaign of his career, starting 35 of City’s 38 league games, while Silva spent a month sidelined but was otherwise largely available.