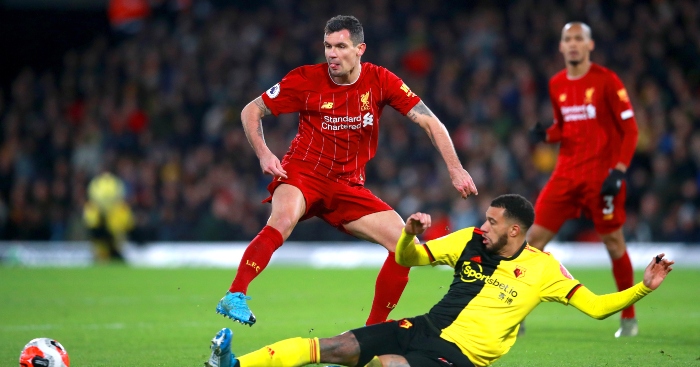 Liverpool‘s chances of ending the Premier League campaign unbeaten were crushed with a 3-0 defeat to Watford at the weekend.

The heavy loss saw Dejan Lovren’s credentials once again questioned after the defender came into the side to make his first league start since December in place of the injured Joe Gomez.

Lovren now has the unwanted record of starting Liverpool’s only two Premier League defeats over the past two seasons – and we’ve compared the Reds’ record since the start of 2018-19 with the Croatia international in the starting XI to when he misses out.

Young Watford fan sat in front of the press box literally jumped out of his seat and punched the air when it was announced Dejan Lovren is starting for Liverpool today.

As the numbers show, Liverpool’s win rate and points per game are only narrowly better without Lovren starter, but their loss rate is more than 50% lower when the defender is out of the team.

The fact Liverpool concede more goals per game when Lovren doesn’t start is somewhat skewed as he was one of a number of senior players to miss the League Cup games against Arsenal and Aston Villa this season, in which the Reds conceded five goals in both matches.

It is also notable that Liverpool keep clean sheets on a fairly significantly more regular basis when Virgil van Dijk is partnered by either Joel Matip or Joe Gomez.