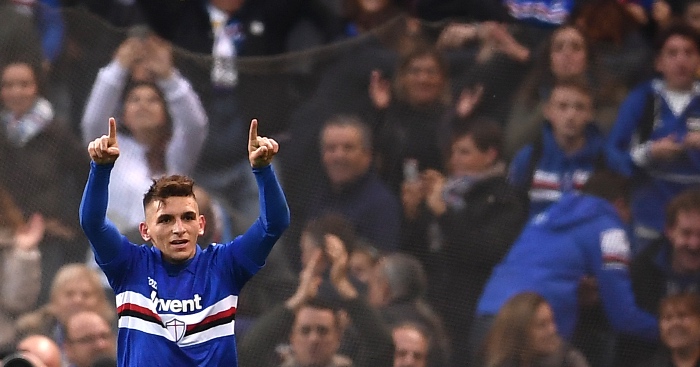 Uruguay international Lucas Torreira has become the most recent arrival to join the new era at Arsenal under Unai Emery.

Torreira has joined Arsenal in a £26million deal from Sampdoria and will be tasked with solving the Gunners’ long standing problems in deep midfield.

We’ve taken a look at the 22-year-old’s Serie A stats from the 2017-2018 season and compared them to Emery’s other options in central midfield: Aaron Ramsey, Granit Xhaka and Mohamed Elneny.

As a deep-lying midfielder, Torreira is not exactly a prolific scorer, but he still managed four goals last term, more than both Xhaka and Elneny, who finished on one and none respectively.

Ramsey leads the way in that regard with seven, and also recorded the most assists with eight. Xhaka provided the next most with seven, while Elneny and Torreira both registered only one each.

Unsurprisingly, Ramsey was directly involved in a goal more often than anyone else on the pitch, providing a goal or assist every 102.66 minutes. Xhaka is second with one every 408.25 minutes, Torreira third with one every 637 minutes and finally Elneny with one every 870 minutes.

Elneny had the highest tackling success rate of any Arsenal player last season with 70.6%, but that’s with only 1.2 completed per 90 minutes. Ramsey completes 1.7 tackles per game, but with only a 48.6% success rate.

Torreira also leads the way with an average of 2.0 interceptions a game, Ramsey is second with 1.2, while Xhaka and Elneny both average 1.0.

With a slight 5ft 6in frame, the new Arsenal man doesn’t win many aerial duals, but he still manages to find himself second on this list. The Uruguayan wins 0.6 per 90 minutes with a success rate of 37.5%.

Looking into their attacking play in more detail, Ramsey again wins out in terms of chances created per game with an average of 1.4. Xhaka created 1.1 with Torreira and Elneny joint last with 1.0 each.

When it comes to passing accuracy, Elneny tops that list with 93.7%. Torreira just pips Xhaka to second with 87.2% in comparison to the Swiss’ 86.9%, and Ramsey finally finds himself at the bottom of something with 84.9% accuracy.

None of the Arsenal midfield are particularly prolific dribblers, but Ramsey completes the most with 1.4 per 90 minutes at a success rate of 77.7%. Torreira boasts the highest rate of successful dribbles with 83% but is behind Ramsey by completing 1.0.

"Lucas Torreira (22) has left for €30 million. I bought him from Pescara when no one believed in him.

"We bet on him and we won, paying just €3 million. The money that comes in will be used to improve the team." pic.twitter.com/GJLqGLG8Ko