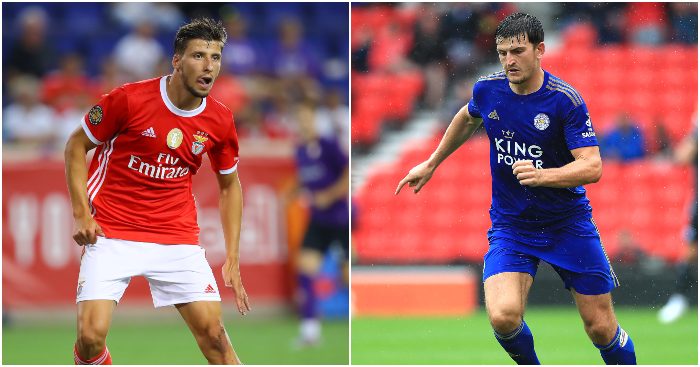 Manchester United remain on the hunt for a centre-back ahead of the 2019-20 campaign, and while Harry Maguire is Ole Gunnar Solskjaer’s first-choice target, Ruben Dias has reportedly been identified as an alternative to the Leicester City man.

The Red Devils remain in negotiations with Leicester, who are holding out for a world-record fee for Maguire, and reports now suggest a move could be made for Benfica’s defender Dias if a deal cannot be agreed with the Foxes.

We’ve compared the two players’ stats from their respective 2018-19 league campaigns to see if they are similar players.

As we often say, tackling statistics can perhaps be misleading. It’s not necessarily a good sign if a defender is having to make lots of tackles, which can often be an indication a mistake has been made. However, tackle success rates can be a good reflection of how strong a player is in this area of the game.

Maguire comes out on top in terms of interceptions, averaging 1.2 per 90 minutes in comparison to Dias’ record of 0.9.

Too much credence should not be placed on numbers for blocks and clearances, but Maguire comes out on top in both the former (1.2 blocks per 90 vs 1.0) and the latter (5.2 clearances per 90 vs 3.4).

Big news today on a man attending work as normal. Harry Maguire is back in at #lcfc after illness yesterday. No new developments regarding a move to #mufc at this stage

While neither player is being signed for their goalscoring prowess, both have shown a handy knack for being a threat in the opposition’s penalty area.

Both Maguire and Dias scored three times in their respective leagues in 2018-19, while the 22-year-old Benfica man also provided an assist.

#mufc have made an attempt to sign Benfica defender Ruben Dias with the bid falling below the player’s €66m release clause. #muzone [O Jogo, Sport Witness]

Solskjaer wants his United side to play vibrant, progressive football that is likely to require his defenders to contribute in possession and building attacks.

Both players have a similar passing accuracy, with Maguire completing 85.6% of his passes in the Premier League last season and Dias completing 86.3%.

Maguire is known for enjoying a surging run upfield but largely manages to avoid risking his own team, completing 0.6 of 0.7 attempted dribbles per 90 minutes – a success rate of 85.7%.

Dias is more conservative in this area of his game, only attempting 0.2 dribbles per 90 minutes and completing 50% of those.