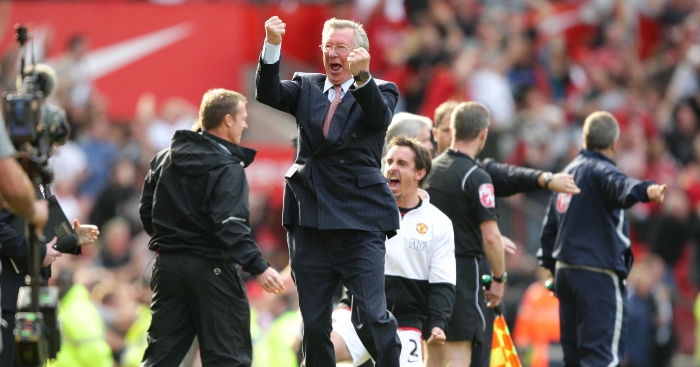 Sir Alex Ferguson branded Manchester City as “noisy neighbours” during his time as Manchester United boss – but things have changed since his retirement.

City have won three Premier League titles over the last six years, while United manager Ole Gunnar Solskjaer is trying to get his club back on track.

We’ve taken a look at United’s record against City under Ferguson and compared it to their more recent record against the Blues since his retirement in 2013.

Ferguson got off to the perfect start against United’s rivals by leading them to home victories in the league and FA Cup during his debut campaign of 1986-87.

City got their revenge with a 5-1 win in 1989 but United then went unbeaten in 16 matches against them in all competitions, winning 10.

United continued to dominate English football but the balance of power started to shift a few years after the Abu Dhabi United Group completed the takeover of City.

The Red Devils won three and lost four of the last seven derbies during Ferguson’s reign, although United did win the league title in 2012-13.

Overall, Ferguson recorded a win rate of 55.3% against Manchester City while United manager, with his side averaging 1.65 goals per game and conceding an average of 1.25 goals per game.

United have struggled to replicate their success under Ferguson and they have also failed to maintain their excellent record in the Manchester derby.

David Moyes was beaten home and away by City in the Premier League and lost by an aggregate score of 1-7. Louis van Gaal had a much better record against the Blues, with two wins, one draw and one defeat in four games.

Jose Mourinho joined United in the same summer that Pep Guardiola signed for City and the Portuguese oversaw two wins in six games against him.

Since becoming United’s manager last season, Ole Gunnar Solskjaer has lost both games against City at Old Trafford, but he has won both games at the Etihad.

Their combined win rate of 37.5% is a lot lower than Ferguson’s, while they have averaged 1.06 goals for and 1.56 goals against in these fixtures.