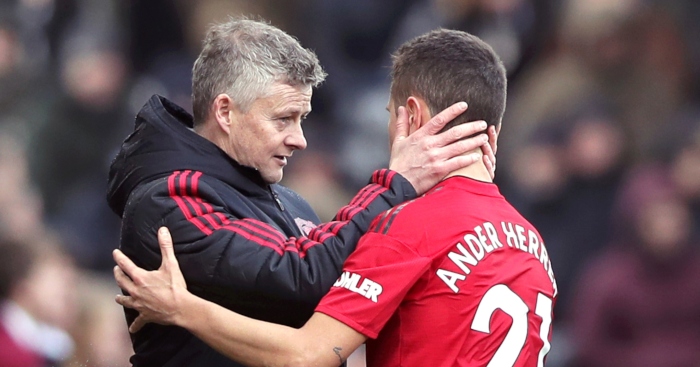 Manchester United‘s form under Ole Gunnar Solskjær has fallen off a little after a rapid start, but the Norwegian still has the club in contention for a Champions League place which felt beyond them under José Mourinho.

A comprehensive 4-0 defeat away to Everton had some questioning the wisdom in handing Solskjær a permanent deal, but there has been one notable caveat which comes into play when looking at the club’s recent results.

Ander Herrera missed out at Goodison Park, and again in the Manchester derby, and has struggled for fitness since mid-February after become a staple of their midfield during the initial surge under Solskjaer – and the stats show just how much United have missed the Spaniard.

Since Solskjær’s arrival, United have played nine league games with Herrera in the starting line-up and eight without, and the drop-off has been notable.

They have won eight of nine with the former Athletic Bilbao midfielder starting, with the one exception – a goalless draw against Liverpool – coming after he was forced off injured before half-time.

In contrast, United have won just four of the nine games without him, drawing at home to Burnley and losing to Arsenal, Wolves, Everton and Manchester City

It would have been five defeats, were it not for Victor Lindelöf’s last-gasp equaliser against the Clarets, while one of the four wins – against Huddersfield Town on Boxing Day – saw Herrera come off the bench to help his team seal victory.

You might think Herrera, as a fairly goal-shy midfielder, wouldn’t have that much of an impact on the ‘goals for’ column. However, his presence as a shield has allowed those in front of him to excel.

United have scored 2.2 goals per game when Herrera has started, compared to 1.6 when he has missed out – and that’s even accounting for the blank they drew against Liverpool.

The identity of the scorers is telling, too. Seven of Paul Pogba’s 10 goals under Solskjær have come with Herrera on the pitch (five in Herrera starts, and two after he came on against Huddersfield), with the other three – one against Burnley and two at home to West Ham – all arriving from the penalty spot.

This is where you might be less surprised to see Herrera shine, but the numbers are still worth paying attention to.

United have conceded an average of 1.88 goals per game without him – the Everton defeat ensured they have conceded more than they have scored, on average, when Herrera has been missing.

In games with Herrera, however, the average is just 0.44: Victor Camarasa, Nathan Aké, Pascal Groß and Abdoulaye Doucouré are the only players to score against Herrera’s team in that period, and each of those goals came with United at least two goals to the good.

Manchester United with and without Ander Herrera since Solskjaer took charge. You can see his importance to this team. #mufc [WhoScored] pic.twitter.com/6Lcbj3kFvF