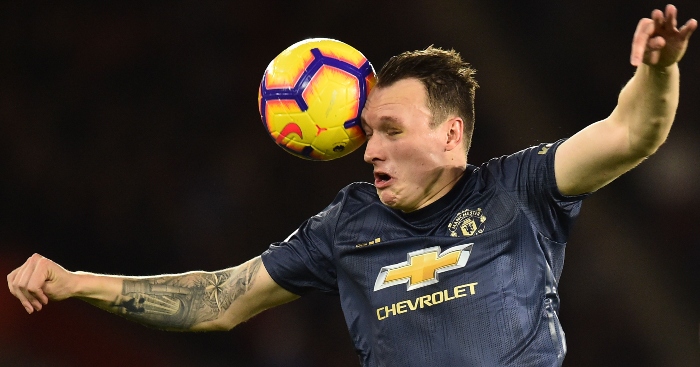 Manchester United came from 2-0 down to draw 2-2 at Southampton on Saturday – but their defensive frailties were once again on show.

Jose Mourinho’s team are already 16 points behind their city rivals, having already dropped more points than Pep Guardiola’s side did in the entirety of last season. But most concerningly of all is that the gap is also opening up on their minimum expectations of a top-four finish.

After keeping just two clean sheets all season, it was no surprise to see them concede twice again with Phil Jones their only fit centre-back, even if it was against struggling Southampton.

Only Fulham have kept fewer clean sheets than United this season, and only the current bottom five have conceded more than their total of 23.

It’s rare that Fulham, Burnley, Southampton, Huddersfield and Cardiff get compared to Manchester United but that’s the company they currently keep, in a defensive regard.

They’ve let in 18 more than Liverpool and 17 more than Man City.

But, startlingly, they’ve also conceded 15 more than at the same point last season. At this point in 2017-18, United had kept nine clean sheets from 14 games, with the superior defensive record help yiingeld 10 more points.

By the end of the last campaign, they had the second-best defensive record having conceded one more than City, and eight fewer than the next-best team, Tottenham. David de Gea also picked up the Golden Glove award for most clean sheets.

There have been some injuries, but nobody apart from Daley Blind left over the summer, so the coach largely has the same tools to work with. So what’s changed?

Regression to the mean

Expected Goals partly hold the key to Manchester United’s defensive woes this campaign. According to Understat.com’s xG model, nobody outperformed more in terms of xGA (Expected Goals Against) than United last season with +15.54.

In contrast, the rest of the top six actually marginally conceded more goals than xGA suggested they might have.

Essentially this means that despite the excellent defensive record last season, Mourinho’s men were avoiding conceding from more of the high-quality chances fashioned against them than any other team in the league.

This season, they’re at -1.89 in xGA, which was broadly similar to the rest of the top six last season.

Lo and behold, the two teams that so dramatically outperformed xGA have fallen down the table this season and conceded a lot more goals.

Conceding a lot of good chances is unsustainable, and its simply catching up with them.

One of the reasons that Manchester United so dramatically outperformed their xGA last season was the man between the posts.

The data simply confirmed what many of us were seeing – a goalkeeper performing barely-believable saves and staking a claim as the best person in his position on the planet.

De Gea is not having a bad season by any means and was up to his usual standards when he performed a stunning reaction save to keep the score at 0-0 against Young Boys.

Last season he produced a scarcely believable performance at the Emirates to deny Arsenal multiple times as United came away with a 3-1 win. Arsenal had 4.6 xG to Manchester United’s 1.9 that day.

It’s impossible to expect the Spaniard to maintain those standards and keep saving their blushes to the same extent as last season.

Where is Eric Bailly?

One of the cornerstones of the solid defence last season was Eric Bailly, who was staking a claim as one of the most promising centre-halves in English football.

This season, he’s made only three league starts in the league for his club and hasn’t appeared in a red shirt in two months. It appears he’s been frozen out by Mourinho after being substituted after 19 minutes after Newcastle had taken an early two-goal lead at Old Trafford.

A back injury was given as the official reason for his omission at St Mary’s, in the midst of a defensive injury crisis with midfielders Scott McTominay and Nemanja Matic brought into a back three alongside Phil Jones.

Whatever the reason for his omission, they’re missing out on a potentially influential figure at the back.

The Ivorian impressed in his debut season, helping United concede only 15 goals in 25 league appearances and keeping 12 clean sheets.

Last season he was hit with injuries and only made 13 Premier League appearances, but he featured prominently during their imperious start as they kept eight clean sheets from their first 10 games. Bailly played 90 minutes in six of those eight clean sheets, and didn’t feature as they lost their first match of the season, 2-1 to Huddersfield.

That record dropped dramatically after he suffered an ankle injury that kept him out from November until February, keeping seven clean sheets from 15 games while he was sidelined.

Antonio Conte described it as a “Mourinho season” – the Portuguese manager’s record in his third season at clubs is a recurring trend. The data suggests that his teams decline defensively after spending two years under his guidance.

He was sacked at Chelsea in December in the 2015-16 season. They had conceded the same amount of league goals at the same stage as Man Utd have – 23 from 14 games. A dramatic drop-off after they had conceded the fewest goals (32) and kept the most clean sheets (17) in the title win the season before.

His Real Madrid team was more attacking, famously scoring a record 121 goals when they won the 2012 La Liga title. However, they conceded only 32 goals in that league campaign, which increased to 42 in his third and final season in Mourinho’s final season in the Spanish capital.

On that occasion the title was squandered to Barcelona by the winter, at which point Real had kept just six clean sheets from their opening 14 games.

Nine of Marouane Fellaini’s most crucial goals for Manchester United