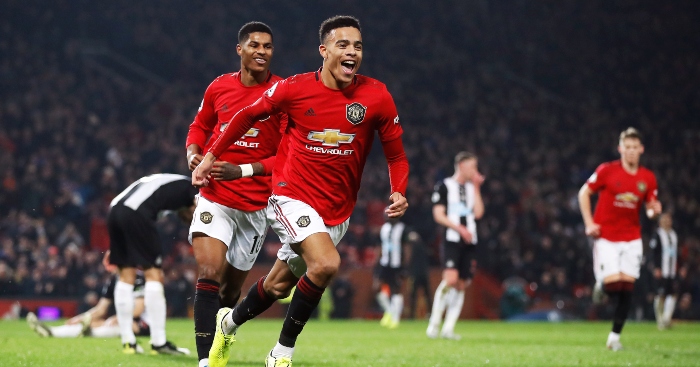 Manchester United have had a difficult season so far – but teenage striker Mason Greenwood has been one of the bright sparks for the club.

The 18-year-old is regarded as one of the best talents in the country and Ole Gunnar Solskjaer called him the most ‘natural finisher’ at United.

We’ve compared Greenwood to some of the most highly rated teenagers in Europe’s top five leagues to see who comes out on top.

Greenwood has eight goals and one assist in 22 appearances in all competitions for United this season. That’s a goal every 122.8 minutes and an assist every 983 minutes – equating to a goal or assist every 109.2 minutes.

In comparison, Real Madrid’s Rodrygo has averaged a goal or assist every 98 minutes, although six of his eight goal contributions have come in the Champions League.

Arsenal striker Gabriel Martinelli is another exciting prospect, and he has eight goals and two assists in 17 appearances, so he has one or the other every 89.8 minutes.

17-year-old Ansu Fati is the youngest player on this list and the Barcelona prospect has contributed to a goal every 105.7 minutes this season.

Borussia Dortmund’s Jadon Sancho is the highest scoring teenager in Europe’s top leagues, as he has 12 goals as well as another 12 assists. That equates to a goal or assist every 79 minutes for Sancho in 2019-20.

Mason Greenwood has netted eight goals in all competitions this season – the only teenager with more in Europe's big five leagues is Jadon Sancho (12). #MUFC [BBC] pic.twitter.com/8aWZt0q0Tf

Goals and assists don’t always tell the full story so we looked at some more detailed statistics from their performances in their domestic leagues this season.

Despite only scoring two La Liga goals this season, Fati has been the most prolific shooter as he has averaged 3.5 shots per 90 minutes in the league.

Unsurprisingly, Sancho has been the best teenage dribbler this season as he has completed a remarkable 3.3 dribbles per 90 minutes in the Bundesliga this season.

Fati isn’t far behind in that regard with 3 successful dribbles per 90 minutes and that is far more than Martinelli (1.5), Rodrygo (1.2) and Greenwood (1).

Despite being natural strikers Martinelli and Greenwood have made the most tackles per 90 minutes out of the five teenagers this season.

However, Greenwood and Martinelli have both only made 0.2 interceptions in the league this season. Rodrygo has made the most per 90 minutes with 1.4, which is the same as Fati (0.8) and Sancho (0.6) combined.

We start with THAT volley by THAT man, Jadon Sancho 🔥 pic.twitter.com/3iUYma2gCG

We’ve also looked at how many key passes each teenager has made in their domestic league this season and this is another area where Sancho stands out.

The English international makes 2.1 key passes per 90 minutes while while Fati averages 1.9, Rodrygo 1.6. Greenwood 0.7 and Martinelli falls way behind with 0.2.

Sancho also makes the highest average of passes per 90 minutes with 58.2 per 90 minutes. Fati is in second place with 46.6 and Rodrygo is just behind with 42.4.

The two strikers have attempted the fewest passes this season as Greenwood has made 30.7 per 90 minutes in the league and Martinelli has made just 16.2

Finally, Madrid’s Rodrygo comes out on top for pass completion in the domestic leagues this season. The Brazilian completed 90.9% of his passes, while Sancho averaged 84.1%, Greenwood 81.6%, Fati 79.2% and Martinelli 74.2%.