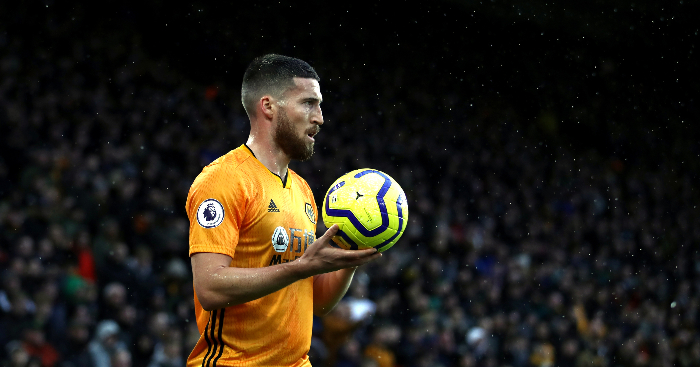 Tottenham have completed the signing of Matt Doherty from Wolves on a four-year deal.

The 28-year-old had been at Molineux since 2010 and has been one of the few players since before the Fosun International Group takeover to rise up through the ranks with the club, having made 18 appearances during their promotion-winning season from League One in 2013-14.

He’s established himself as Premier League quality but would he be an upgrade on what Spurs have already got at right-back? Here’s how his stats compare to Serge Aurier’s.

Mourinho has first-hand experience of Doherty’s attacking prowess after watching him get forward to score Wolves’ equaliser against Spurs back in March, a match the Midlanders went on to win 3-2 at the Tottenham Hotspur Stadium.

That was one of the Republic of Ireland international’s four Premier League goals last season, averaging one every 710 minutes. In contrast, Aurier scored once – in that same game, in fact – from 2706 minutes in the league last term.

If you’re looking for a larger sample size, from three seasons in the Premier League, Aurier has registered a total of three goals and nine assists, a direct involvement every 391 minutes.

Our longest serving player has signed up for four more years!

So check out some of the best moments from Matt Doherty’s Wolves journey so far!

Doherty is much likelier to shoot directly at goal. He averaged one shot per game in 2019-20, compared to just 0.4 for Aurier.

But Tottenham’s Ivory Coast international is the more prolific dribbler, averaging 1.2 dribbles completed per game last term in comparison to 0.8 for Doherty. But with that comes the increased chance of losing the ball – Aurier was dispossessed 0.8 per game last season, twice as often as Doherty (0.4).

There’s little in it in terms of fouls drawn. Aurier edges it (0.7 fouls won per game) ahead of Doherty (0.5).

Key passes (the final pass before a team-mate shoots at goal) last season matches up with their rate of assists. Aurier registered one per match last season, 40% more often than Doherty (0.6).

Aurier was the tidier passer of the two, averaging a 79.1% passing accuracy in comparison to 74.9% for Doherty, but he was marginally less involved in play, averaging 38.8 passes per game compared to 41.0 from the Irishman.

In terms of the type of passes, there’s little in it in terms of long balls completed (1.3 per game for Doherty, 1.0 for Aurier), but the Spurs man was a lot more prolific in crossing, averaging 0.6 crosses per game, while Doherty registered 0.2.

Aurier made nearly double the number of tackles Doherty did per game in 2019-20, averaging 2.8 to 1.5, though Paolo Maldini will tell you that isn’t necessarily a good thing.

Aurier was also ahead in terms of interceptions (1.4 per game to 1.1) and made 2.5 clearances per game compared to Doherty’s average of 1.3.

It should be noted that this discrepancy could well be down to their different roles at their respective clubs, with Doherty playing as a wing-back under Nuno at Wolves, with a third centre-half covering any shortfall in defensive duties. Aurier, meanwhile, played more like a traditional full-back – something Doherty will likely need to adapt back to if he’s to seal the switch.