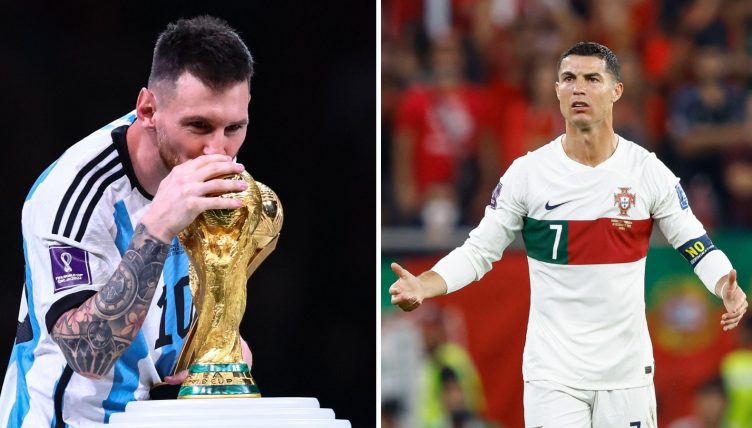 The Lionel Messi and Cristiano Ronaldo debate has dominated football for the last 15 years, but how do the two icons compare on the biggest stage of all – the World Cup?

Messi finally has his hands on the most prestigious trophy in football, at the fifth attempt, while Ronaldo’s final World Cup appearance ended in tears as Portugal suffered a shock elimination to Morocco at the quarter-final stage in Qatar.

Both players made their World Cup debuts in Germany 2006, making them two of only five players from that tournament to be competing in Qatar too.

However, while Ronaldo achieved glory with Portugal in the 2016 Euros and Messi won the Copa America with Argentina in 2021, the two era-defining icons came into the 2022 World Cup knowing it was surely their last chance to lift the most coveted prize going.

Messi came closest to winning the World Cup in 2014, when he guided Argentina all the way to the final, only to narrowly lose out to Germany. The Argentine won the Golden Ball for his efforts in 2014, but the biggest prize just slipped away from him on that occasion.

The Argentinian picked up a second Golden Ball, along with the trophy itself, in Qatar, having been the talisman of Argentina’s triumph. He scored in every stage of the knockouts, including a brace in the astonishing penalty shootout victory over France in the final.

“You can only talk about people in your lifetime and I didn’t really see much of Pele as I was very young, but in my lifetime only [Diego] Maradona really can compare for just doing things that other mortals can’t do,” Gary Lineker Lineker told FIFA.com.

“You can compare people statistically in terms of goals – obviously [Cristiano] Ronaldo is a great footballer – but what separates Lionel Messi from even the greatest of players is that ability to do the things that others can’t do.

“Maradona is the only other player to do that and he didn’t do it over the period of time that Messi has, so that maybe gives [Messi] the edge.”

The furthest Ronaldo has ever progressed in the tournament actually came in his first World Cup in 2006. Portugal made it all the way to the semi-finals, only to narrowly lose 1-0 to France when Zinedine Zidane’s first-half penalty sent Portugal home empty-handed.

Ronaldo was a star of the 2006 World Cup, which will forever be infamous for his wink after fellow United team-mate Wayne Rooney was sent off, but perhaps his finest World Cup moment came in Russia 2018 when he scored a last-minute free-kick against Spain to round off his hat-trick.

Qatar 2022 was not the veteran’s tournament. It offered an opportunity for redemption after his controversial interview with Piers Morgan and exit from Manchester United on the eve of the tournament, but it was not to be for the 37-year-old. He was dropped by Fernando Santos after the group stage, and while he appeared off the bench as Portugal were losing to Morocco in the quarter-final, he failed to find a leveller for his team.

But how do the two greats stack up against one another when it comes to the World Cup?

But who’s best? Well, if you want to watch five goats deciding who’s the football GOAT – Diego Maradona, Pele and Zinedine Zidane are also in the reckoning – then you’re in luck because that’s exactly what Betway have superbly set up.

But if you’re boring and won’t take the view of five goats as gospel, we’ve crunched the numbers to see exactly how their World Cup records compare.

Lionel Messi came up BIG for Argentina in the #FIFAWorldCup final#BBCWorldCup #BBCFootball pic.twitter.com/nAJAz2F3g3