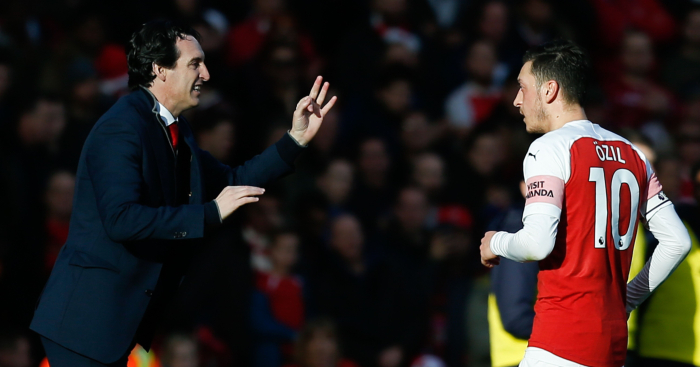 Mesut Ozil’s future at Arsenal is once again the subject of scrutiny as he finds himself out of favour under Unai Emery.

In January 2018, Ozil signed a new long-term contract which made him the best-paid player in the club’s history.

But the Germany international found himself left out of Emery’s matchday squad for the recent trip to West Ham – and we’ve taken a closer look at his Premier League stats from this season in comparison to Arsene Wenger’s final campaign at the club.

Ozil needs just one more goal this term to match his four Premier League goals from 2017-18, but he has provided far fewer assists.

The 30-year-old created eight goals last season but has just one assist to his name in 2018-19.

As a result, Ozil has provided a goal or assist every 245.25 minutes in the Premier League under Emery, in comparison to one every 180.33 minutes last year.

READ: The majesty of Mesut Ozil and the tragedy of taking talent for granted

While it is sometimes unfair to judge a player’s lack of assists (they still require a team-mate to put the ball in the back of the net), Ozil’s drop can be attributed to the fact he is creating fewer chances in the Premier League this season.

His passing accuracy has marginally improved (86.5% to 87.3%), but he has also been less effective in his dribbling.

This season, both numbers have dropped, with Ozil completed fewer dribbles (one), at a worse success rate (62.5%).

While he has been dispossessed on average 1.3 times per 90 minutes in both campaigns, he has produced more unsuccessful touches (2.2 to 1.7) per 90 minutes this term.

No matter what … put in the work 💪🏼 #M1Ö #YaGunnersYa @Arsenal pic.twitter.com/deLxWVaUlt

Ozil has never been noted for his defensive work-rate and, while he averages fewer interceptions per 90 minutes this term (0.1 to 0.5), his tackling output has remained largely the same.