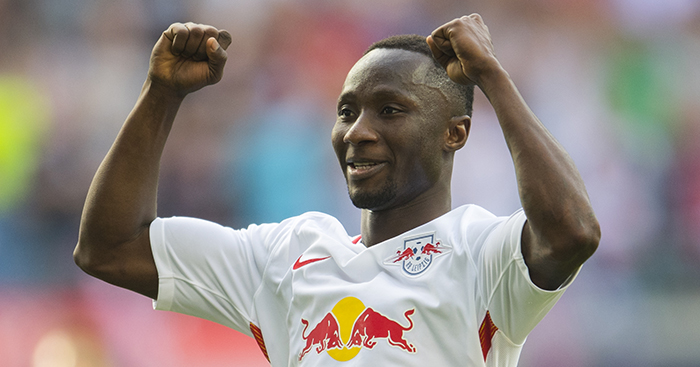 Liverpool fans are already excited to see what £48million signing Naby Keita can do next season, but just where does he fit into a Jurgen Klopp team? And how does he compare to the Reds’ current midfielders?

Liverpool announced they had agreed a deal to sign Keita last August, and after Philippe Coutinho was sold to Barcelona, many fans had hoped they might be able to get him to Anfield in January rather than next summer as had been originally agreed.

However, both clubs swiftly confirmed that this wasn’t an option and so Keita will remain in Leipzig for the rest of the campaign.

As it turns out, Liverpool have in fact coped well since Coutinho’s departure, especially recently, winning their last three games and scoring 11 goals in the process, albeit they are not among the FA Cup quarter-finalists. Keita on the other hand is regarded to have underperformed for RB Leipzig this season since the transfer was announced.

He is currently out injured, but when fit Keita has predominantly featured in the centre of midfield in a 4-4-2 for Leipzig, though he has appeared as part of a midfield three or further up the pitch. He is a natural box-to-box player, tenacious, incredibly fit and with the ability to contribute at both ends.

Jurgen Klopp’s team play with a three-man midfield, often made up of one sitting midfielder – usually Jordan Henderson, Emre Can or James Milner – with two others just in front.

The team’s average positions in Saturday’s win against West Ham highlight how the three midfielders perform in this system. Emre Can (No.23) is the sitting player in this instance, with James Milner (7) and Alex Oxlade-Chamberlain (21) in front.

The two players ahead of the sitting midfielder are both tasked with pushing forward and supporting the forwards’ high-press on the oppositions backline.

Keita would be a perfect fit for one of these two more-advanced positions. Although he has played the sitting role before, it wouldn’t make best use of his attributes.

When comparing Keita’s offensive statistics to Liverpool’s current midfielders, he more than holds his own.

He’s scored four goals in the Bundesliga so far this season, more than any Liverpool midfielder has managed in the Premier League, and also averages significantly more successful dribbles per game. 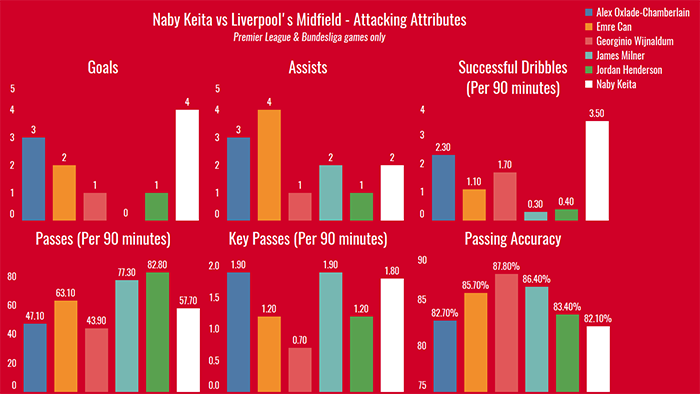 He has only provided two assists, however, meaning his overall contribution of six goals (4 goals and 2 assists) only matches that of Emre Can and Alex Oxlade-Chamberlain.

His passing accuracy of 82.1%, meanwhile, is the lowest of the six players.

It’s worth noting, incidentally, that all four of Keita’s goals have come from outside the area. Maybe he can replace the long-range shooting ability of Coutinho?

Naby Keita has scored four goals from outside the area this season – the most in the Bundesliga. He's had 21 chances overall, giving him a conversion rate of 19% #LFC

From a defensive point of view, Keita’s tenacity and speed are crucial: he averages 2.5 interceptions a game, considerably more than any other Liverpool midfielder, while his tackling statistics are also impressive.

His aerial duals are comparatively low, but at just 5ft 8in he is the shortest of the six so perhaps this should be expected. 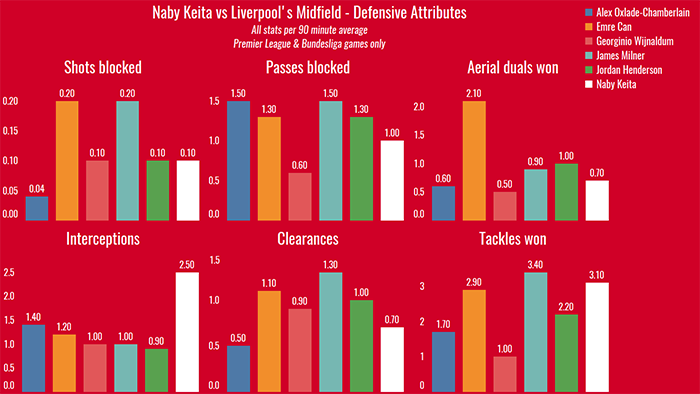 Jurgen Klopp has reiterated in the past that he likes to have a squad of players he can count on, rather than a first XI that play week in, week out.

They’ve made more Premier League line-up changes than any other side this season, making 105 alterations and averaging over four changes a game. The introduction of Keita will allow Klopp him to continue to share the workload around and avoid fatigue even if Can leaves this summer. 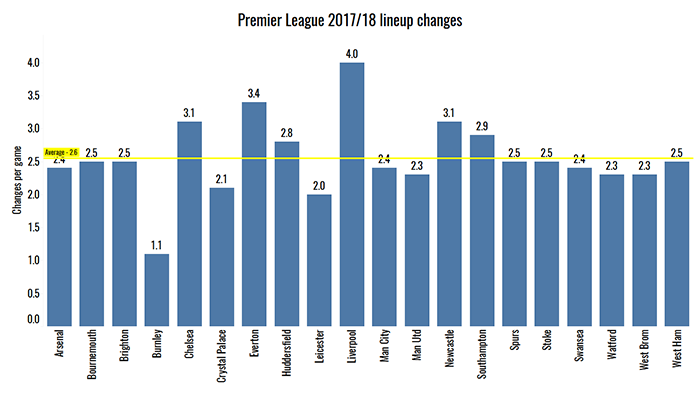 Liverpool will be hoping they can carry on their good form between now and the end of the season, even without Keita.

But with the Guinean already signed up for next season and more sure to follow him to Anfield, Klopp will no doubt be under pressure to push the team to the next level.

Steve McManaman: Criticising LFC owners for not spending is ‘nonsense

Liverpool’s best home kit of the Premier League era: Vote for your favourite