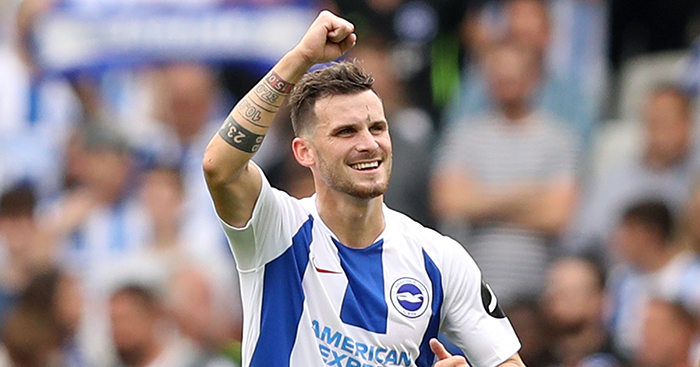 Liverpool have been linked with a January move for Brighton’s Pascal Gross – but how would the German fit into Jurgen Klopp’s system if he were to sign?

Klopp, who has praised Gross before, is said to want to add competition in his attacking midfield ranks having recently utilised a 4-2-3-1 formation.

Gross, 27, has been hampered by injury this season, making just eight appearances in the Premier League, but how has he fared in those games in comparison to the players he would be competing with at Anfield were he to make the move?

Despite only being on the pitch for 502 minutes in the Premier League so far this season, Gross has created 13 chances for his Brighton team-mates at an average of 2.3 per 90 minutes.

Impressively, that is the same as Mohamed Salah has been averaging for Liverpool, and more than Xherdan Shaqiri (1.9), Roberto Firmino (1.6), Sadio Mané (1.1) and Adam Lallana (1.1).

Gross is yet to record an assist this campaign, but that would appear to be more down to the wastefulness of his team-mates having set up eight goals (and scored seven) in his debut season in the Premier League.

Gross is regarded as a set-piece specialist but has found a target with only 29% of the 17 corners he has taken for Brighton so far this season.

That pales in comparison to James Milner’s success rate, with the veteran finding a man with an impressive 47% of his 43 corners, though having Virgil van Dijk to aim for certainly helps in that regard.

Of the Reds’ other corner-kick takers, Salah has a 37% accuracy, Trent Alexander-Arnold has a 41% accuracy, while Shaqiri has a 36% accuracy.

In terms of crosses from open play, Gross has found a target with nine of the 37 he has attempted so far this season, giving him a success rate of 24%, which again compares unfavourably to Milner (31%), Salah (28%) and Shaqiri (30%), though it’s better than Alexander-Arnold (21%) and Andrew Robertson (18%) from the full-back positions.

The German dribbles much less but is rarely dispossessed in other situations, too, having the ball taken from him on just 0.5 times per 90 minutes so far this season in comparison to Salah’s 3.0, Shaqiri’s 2.1, Firmino’s 2.0, Lallana’s 1.7 and Mané’s 1.3.

Gross would certainly be expected to contribute defensively were he to move to Anfield, but that’s not something that would be new to him.