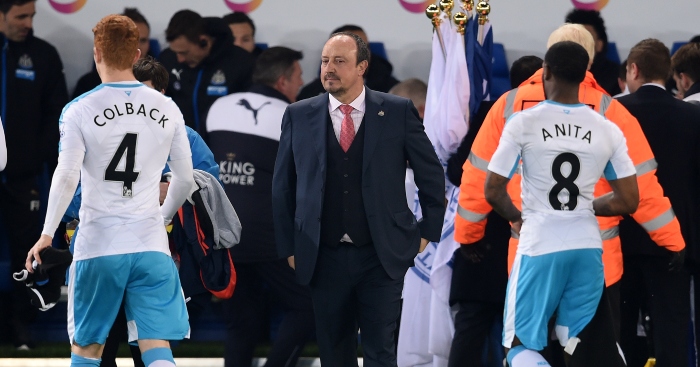 It’s finally official. After more than three years, and a wonderful connection with the fans, Rafa Benitez will leave Newcastle United when his contract with the club expires.

Benitez helped return the club to the Premier League at the first time of asking and solidified the club’s place back in the big time with 10th and 13th place finishes (though the latter came with a higher points total).

In order to put into context how far the Spaniard took the team, we’ve compared his first ever Newcastle XI – in a defeat to champions-elect Leicester City – with the team he led to victory at Fulham in his final game in charge. (Note: due to different formations, some of the players don’t match up exactly.)

The lack of a settled first choice is unlikely to have helped, and there was a danger of things going the same way in 2017-18 until Benitez brought in Dúbravka and made it clear he’d be first choice.

The Slovakia international initially arrived on loan, winning over fans with a clean sheet against Manchester United on his debut and going from strength to strength from thereon.

Dúbravka joined permanently over the summer and has played every league game since, keeping Elliot out of the picture entirely.

Janmaat was in his second season as a Newcastle player when Benitez arrived but only managed a handful of games under the Spaniard, although he did score the Magpies’ last Premier League goal of the campaign in their 5-1 victory over Spurs.

His place was initially taken by DeAndre Yedlin, up the road at Sunderland when Benitez rocked up at St James’ Park, but the American missed the final game of the 2018-19 seasn due to injury.

Isaac Hayden was a bit of a utility man after joining from Arsenal at the start of the 2016-17 promotion season, mostly playing in midfield but also filling in in defence.

The ex-Gunner was just one of a number of Championship mainstays to keep his place and establish himself in the Premier League.

Lascelles was still a relative Premier League rookie in 2016, embarking on his first top-flight season after coming through the ranks at Nottingham Forest.

The Lascelles we saw in 2018-19, though, had come on leaps and bounds, captaining the side and becoming a key part of the stingy defence which helped the team thrive under Benitez.

Newcastle had the best defence outside the top seven in 2017-18, and were just two goals away from repeating the feat last season. The centre-back, who played 30 or more games in both seasons, has to take a lot of credit for that.

Benitez hasn’t been allowed to spend a lot on his first team, but Schär’s performances demonstrate there is value to be found in the market if you look hard enough.

The Swiss international arrived for just £3million after Deportivo La Coruña’s relegation from La Liga and quickly cemented himself in the first team, chipping in with some surprisingly spectacular goals to boot.

Steven Taylor, meanwhile, wasn’t even the best version of Steven Taylor to play for Newcastle. And when you consider that best version wasn’t that great, you can probably guess what he was like in the months before moving to MLS.

Dummett wasn’t supposed to play as much as he did in 2018-19 but often stepped in due to Florian Lejeune’s injury troubles and, on occasion, due to being a legitimately better option than Javi Manquillo on the left.

Did the Agüero-style silver hair give him a new lease of life? We don’t want to jump to conclusions, but absolutely.

At the start of his reign, Benitez often had to make do with the tools at his disposal and just get on with things (plus ça change, am I right?), and this meant using Jack Colback on the left of a back four.

Just going to leave that there for anyone suggesting he should have done better early on.

Only Newcastle could sign a young midfield prospect from Ajax a full seven years before it became sexy, and only Rafa Benitez could convincingly convert a man with a face as inoffensive as Matt Ritchie into a machine of a wing-back.

This one is the clearest upgrade, despite all appearances.

Sissoko wasn’t a £30million player when Mike Ashley convinced Tottenham to pay that much for the midfielder, but he was at least a France international who followed up the 2016 relegation with actual game-time at Euro 2016.

Diamé, meanwhile, was a player Newcastle managed to sign in the second tier without a huge amount of resistance.

The Senegal midfielder fought for his place – too literally, on one occasion, after coming to blows with Lascelles on the training ground – but remained in and around the first team until the end of his contract this season.

Perhaps Benitez will take him with to his next club, wherever that is.

The 2016 version of Shelvey is surely the better of the two, having arrived from Swansea in January and almost helped the Magpies escape the drop.

More recently, he’s only reclaimed his place due to the absence of others, with Benitez preferring youngster Sean Longstaff or another former Swansea man in Ki Sung-yeung in the middle and preparing for Miguel Almirón to take the reins longer-term.

If nothing else, Shelvey’s presence in 2019 emphasises the requirement for Benitez to work with what he had rather than making huge overhauls to the squad over the course of his three-and-a-bit years in charge.

Wijnaldum was the one shining light from the 2015-16 season, albeit not in away matches, and fans who saw him in the North East won’t be too surprised to see him make back-to-back Champions League finals with Liverpool.

The Dutchman scored twice on the final day of the season, ending his one and only Newcastle campaign with 11 goals.

No Newcastle midfielder has been shorn entirely of defensive responsibilities under Benitez, and this is a big part of why Atsu featured so much in the manager’s final season.

The former Chelsea winger forced out Kenedy, playing more than two thirds of the available games since arriving – initially on loan but then permanently – in 2016.

Massive thanks to Rafael Benitez for his excellent handling of Christian Atsu who seemed to have turned a career-loanee.

26 Premier League apps this season alone, is remarkable for Atsu's present state. All he needed was a manager who believes in him and here was Rafa. pic.twitter.com/LZtuKGNSQF

It feels like Pérez has been linked with a move away from St James’ Park every single summer since joining in 2014, but against all odds he enjoyed his best ever goalscoring season for the club under Benitez.

2018-19 marked the first time the Spaniard reached double figures in the Premier League, scoring 12 times to keep Joselu and Yoshinori Muto on the fringes.

Back in 2016, he struggled for goals, failing to find the net even once under Benitez and not doing a great deal better during Steve McClaren’s reign. Perhaps surprisingly, the more recent version is the better one.

We could easily have found ourselves talking about another like-for-like, with Mitrović still on Newcastle’s books in the summer of 2018, but the Serb was allowed to leave after things never really clicked with him and Benitez.

Rondón, on the other hand, was an inspired addition. The Venezuelan joined on loan from West Brom after failing to keep the Baggies in the Premier League, but seemed so well-suited to Newcastle you wondered why (a) they hadn’t moved for him sooner and (b) they didn’t get him permanently rather than on loan.

Just kidding, we all know why.

Still, a personal Premier League high of 11 goals will be tough to replace if he decides the absence of Rafa, or Mike Ashley’s purse strings, means he doesn’t fancy sticking around longer-term.