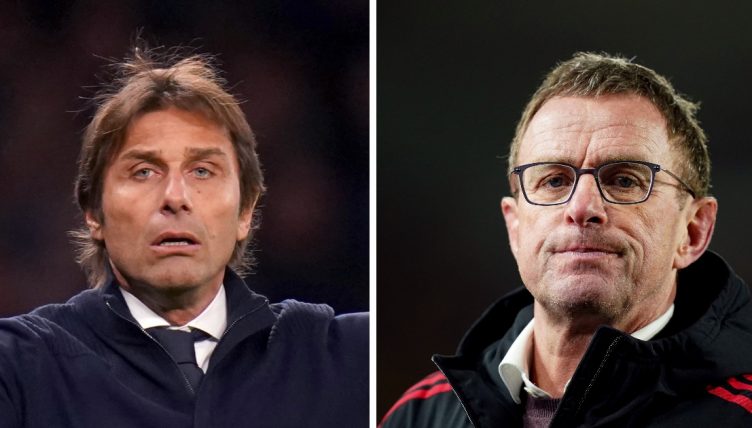 It’s safe to say this season hasn’t gone entirely to plan for either Manchester United or Tottenham Hotspur. But how do the two clubs’ records compare since they changed managers, opting for Ralf Rangnick and Antonio Conte as their new bosses, respectively?

After signing Jadon Sancho, Raphael Varane and Cristiano Ronaldo, United were expected to challenge for the league title but have endured a calamitous season which saw Ole Gunnar Solsjkaer lose his job in November.

Expectations weren’t as high at Tottenham but Nuno Espirito Santo’s short reign will go down as one of the worst in the club’s history. With heavy defeats against Arsenal, Chelsea, Crystal Palace and United, he did well to last until Halloween.

The two clubs dealt with their unexpected managerial vacancies in contrasting ways. Whereas Spurs broke the bank to lure Antonio Conte to the Tottenham Hotspur Stadium, United chose to appoint Ralf Rangnick on an interim basis and look for a permanent replacement in the summer, and Ajax’s Erik ten Hag is now set to take the hot seat.

Conte, available after leaving Inter Milan in the summer, had been heavily tipped to replace Solskjaer at United – but the Norwegian bought himself just a bit more time by leading United to a 3-0 victory over Nuno’s Spurs in October.

The match resulted in Tottenham sacking the Portuguese coach and moving quick to secure Conte’s signature before United could. Would things look much different at Old Trafford now if they’d appointed the Italian instead of Rangnick?

Both United and Spurs have improved over the intervening period but their new managers have encountered difficulties.

United were eliminated from the FA Cup by second-tier Middlesbrough and have dropped points against Burnley and Newcastle, were thrashed 4-0 by Brighton, and find themselves out of the running for a Champions League place.

Meanwhile, Tottenham barely laid a glove on Chelsea in their League Cup semi, exited Europe in the most farcical fashion and also exited the FA Cup to Chris Wilder’s Boro, but have also picked up some impressive results against Liverpool and Manchester City in their hunt for a Champions League place.

With Manchester City, Liverpool and Chelsea having secured a top-four finish, it is now between Arsenal and Conte’s Spurs for the final spot, but despite a fantastic 3-0 victory in the North London derby, Spurs remain one point behind their North London rivals with two games to go.

We’ve compared Rangnick’s record at Old Trafford with Conte’s performance as Spurs manager since their mid-season appointments. The results are very interesting…