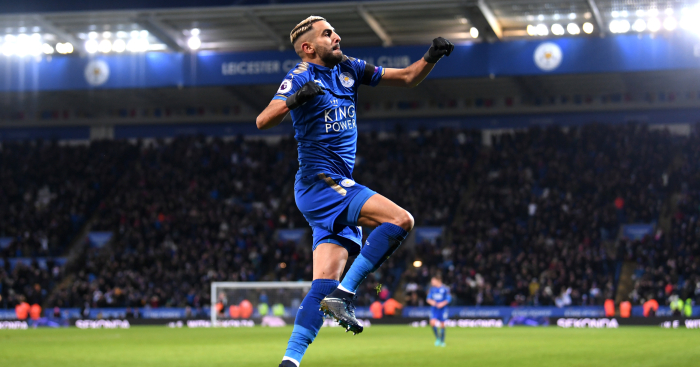 Manchester City have finally signed Riyad Mahrez from Leicester City after a lengthy pursuit, shelling out £60million for the 2016 Premier League winner.

Mahrez scored 17 goals and added 11 assists in Leicester’s title-winning campaign, averaging better than a goal every four games in his four years in the Premier League.

With City finally completing the deal for a player they have been chasing for at least a year, we have compared his stats from last season to Raheem Sterling, Leroy Sane and Bernardo Silva.

Sane was cruelly denied a share of the Premier League’s first ever Playmaker award thanks to City’s last-gasp winner at Southampton on the final day, the German finishing on 15 assists for the season.

Mahrez’s 10 was also bettered by Sterling, who claimed one more assist than the Algerian, while Silva created four goals throughout City’s season.

Mahrez was directly involved in a goal every one and a half games, averaging 134.6 minutes per goal or assist, while Silva averaged one every 152 minutes.

Riyad Mahrez has reached double figures for goals and assists in two of the last three league seasons:

At City, Silva averaged a slightly higher 1.8 despite ending the season with just four assists, while Sterling averaged 1.9. Sane played the highest number of key passes, averaging 2.2 per 90 minutes.

Silva played the most passes per 90 minutes out of the quartet, averaging 55.4 last season, with a success rate of 87%.

With Guardiola’s style, you’d expect the City players to play a large number of passes, though Sterling (40.6) and Sane (40.5) didn’t average too many more passes per 90 minutes last season than Mahrez, who attempted 38.8 per 90.

The former Leicester man did have the worst success rate, though, completing 79.6% of his passes, with Sterling (84%) and Sane (84.2%) once again very similar.

82nd goal – West Brom – Premier League – For me, this is his best ever goal for Leicester City, even over THAT Liverpool goal! The ball from Mahrez was perfect and Vardy strikes a sweet volley with his WEAK foot and scores again at West Brom! Fantastic goal! 👏😳 pic.twitter.com/FSp2ZI7yGd

In the 2017-18 campaign, Mahrez embarked on 2.5 successful dribbles per 90 minutes, and out of the four it was only Sane who recorded more, with 3.2

Despite his dribbling prowess, Sane gave the ball away more frequently than the other players, taking 3.0 unsuccessful touches per 90 minutes, and being dispossessed 2.4 times on average.

Mahrez is next, with an average of 2.8 unsuccessful touches per 90, while he was dispossessed 1.9 times.

Mahrez was next in a more compact, defensively minded Leicester side, averaging 1.2 tackles and 0.5 interceptions per 90 minutes in the Premier League.

Sane made an average of 1.0 tackles per 90 minutes and 0.5 interceptions, while Sterling managed just 0.7 tackles and 0.3 interceptions on average, despite City’s high-tempo pressing style.