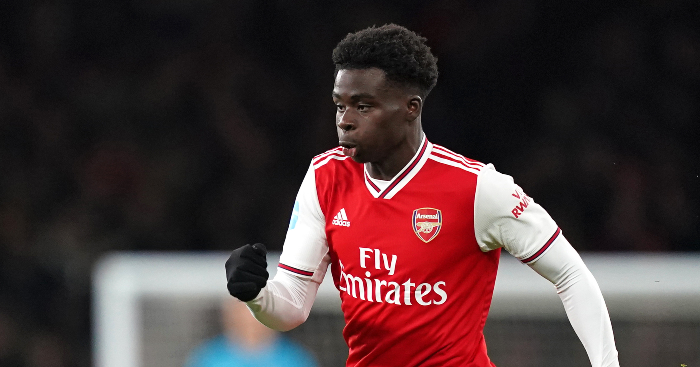 Bukayo Saka originally made his Premier League debut for Arsenal as a 17-year-old on New Year’s Day 2019, coming off the bench to see out the final few minutes of a 4-1 win over Fulham.

He had to wait until the following campaign to make his second appearance, but he’s now turning heads in a sensational breakthrough campaign. He’s being talked up as one of the best youngsters in the league and touted for England’s Euro 2020 squad.

But is he further along at a similar stage than Arsenal’s other youngest debutants of the Premier League era? Here’s how they compare.

Starting to nail down his position at left-back, Saka is already garnering a reputation as something of an assist king – the prospect of record-breaker Trent Alexander Arnold on one flank and Saka on the other should send England fans giddy.

Mikel Arteta opted to rest him against Everton, but he was called into action after just 18 minutes after Sead Kolasinac suffered an injury. Within 10 minutes he assisted fellow academy graduate Eddie Nketiah to draw the Gunners level on the way to their 3-2 win.

That’s his 10th assist of the season in all competitions – he’s the youngest player to assist in consecutive Premier League appearances since Francis Jeffers for Everton in 1999 (per OptaJoe) and the first teenager to hit double figures for assists in a single season for Arsenal since Cesc Fabregas in 2006-07 (per Tom Ede). He also leads the Europa League assists charts with five in total – one per appearance.

Arsenal’s youngest ever debutant, Jack Wilshere remains the only 16-year-old to appear for Arsenal in the Premier League. Within a few weeks of his debut he was off the mark, scoring in a 6-0 win over Sheffield United in the League Cup, and appearing in the Champions League, appearing as a substitute against Dynamo Kyiv.

But he’d have to wait a couple of years for his breakthrough season as a regular, with a total of just two Premier League appearances in his first two years in the senior set-up, developing with a half-season loan with Owen Coyle’s Bolton Wanderers.

Having poached the precocious talent from Stuttgart’s youth set-up, Arsenal have instead seen Gnabry fulfil his early potential at Bayern Munich, having taken a couple of left turns at Tony Pulis’ West Brom and Werder Bremen.

Like Saka and Wilshere, Gnabry made a brief cameo debut in the Premier League but had to bide his time until the following season for a second opportunity. He scored one goal in 18 appearances across all competitions in his first two seasons, while his third was stunted by a serious knee injury.

Still the standard-bearer for exceptional young Gunners talent, Fabregas was on the periphery for the Invincibles, not featuring in their unbeaten league campaign but getting the odd opportunity in the cups.

But the following season, 2004-05, he was still just 17 but became a regular and a ready-made superstar. He made 33 top-flight appearances, scored two goals and provided five assists. A further 106 assists and 28 goals would follow in his Premier League career.

#OTD in 2003, Cesc Fàbregas became Arsenal's youngest ever goalscorer at the age of 16 years and 212 days pic.twitter.com/pGnL0jpZkj

A Hale End academy graduate, Maitland-Niles would have to be patient to break through. He made his Premier League debut in December 2014 but would spend the 2015-16 season out on loan at Mick McCarthy’s Ipswich Town and make just one further league appearance for his boyhood club before 2017.

Saka has already surpassed the Arsenal career of McGowan, an FA Youth Cup winner with Arsenal. He made one appearance in the 1996-97 season so didn’t qualify for a winners medal, and only six more would follow.

A loan and permanent move to Luton Town would follow, but he retired from the game at 25 and subsequently became a PE teacher.

Sven Goran-Eriksson infamously made the bonkers decision to take Walcott to the 2006 World Cup before he even made his debut for Arsenal, but the following season he’d become a Gunners regular, scoring one League Cup goal from 32 appearances in all competitions (16 in the Premier League).

He registered three Premier League assists in that breakout year.

Ramsey had already featured in the FA Cup final for Cardiff in 2008 before he signed for Arsenal as a 17-year-old. He showed plenty of promise in his first couple of seasons.

He featured nine times in his debut season (seven wins, only one defeat), registering one assist. In his second season, he scored three times and assisted three more in 18 Premier League appearances.

Aaron Ramsey's first goal for Arsenal, scored against Fenerbahce (A) in the 2008/09 season.

At just 17 years and 300 days, Ramsey is the 7th youngest goalscorer in the history of the Champions League (since 1992). pic.twitter.com/ZVSkus1VGZ

The striker’s Arsenal career never quite had the lift-off that many fans were hoping for, having been with the club since the age of six and prolific for the youth teams.

He made the occasional cup appearance and his Premier League debut came as a late substitute in a 3-1 win over Sunderland in September 2013, but he’d never score for the senior team in three further top-flight appearances (12 in total).

Six loans in five years would follow, before a permanent transfer to PAOK in 2018.