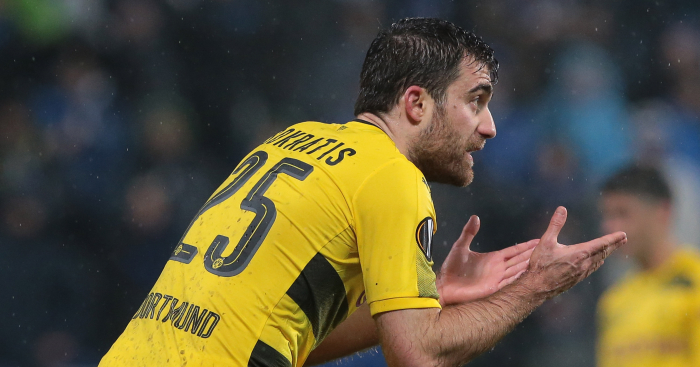 A defensive frailty has plagued Arsenal for a number of years, and they will be hoping that Sokratis can finally help solve some of their problems.

We’ve taken a look at the 30-year-old’s stats from the 2017-2018 season in the Bundesliga and compared them to his rivals at his new club – Laurent Koscielny, Shkodran Mustafi, Rob Holding and Calum Chambers – to see whether he looks to be an improvement on the current crop.

Joint-top among the quartet of the Arsenal centre-backs, Sokratis averaged 2.5 completed tackles per 90 minutes in the Bundesliga at an impressive success rate of 92%.

Only Mustafi matched the Greek with 2.5 successful tackles per 90, although he attempted more, with a success rate of 73%.

Sokratis is bottom of the pile when it comes to interceptions, however, making only 1.1 per 90 minutes. Chambers averaged 1.9 and Koscielny 2.2 while Mustafi and Holding both made 2.3 per 90 minutes in the Premier League last season.

Mustafi leads the way by a mile when it comes to aerial duels, winning 4.8 per 90 minutes. Koscielny averaged 3.2, Sokratis 3.1, level with Holding, and Chambers 2.9.

It’s not unusual to see defenders with pretty poor records when it comes to their tally of cards, so it shouldn’t worry Arsenal fans to see that Sokratis has the worst discipline among the current centre backs.

From 28 Bundesliga games, Sokratis picked up five yellow cards and one red card – no Arsenal centre-back received a red card during the Premier League season.

Mustafi and Koscielny both made 25 appearances, with the German picking up six cards to his French team-mate’s four.

Holding, meanwhile, managed three yellow cards from just 12 appearances, while Chambers picked up just the one from his dozen games.

Mustafi boasted the highest number of goals last season with a healthy three, while Sokratis and Koscielny both scored two. Neither Chambers or Holding found the back of the net.

Koscielny has the best passing accuracy within the squad, completing 89% of passes last season. Sokratis has a respectable 86.9% with Mustafi just behind with 86.2%. Holding completed 84.6% of his passes while Chambers finished the season with 83.3% accuracy.