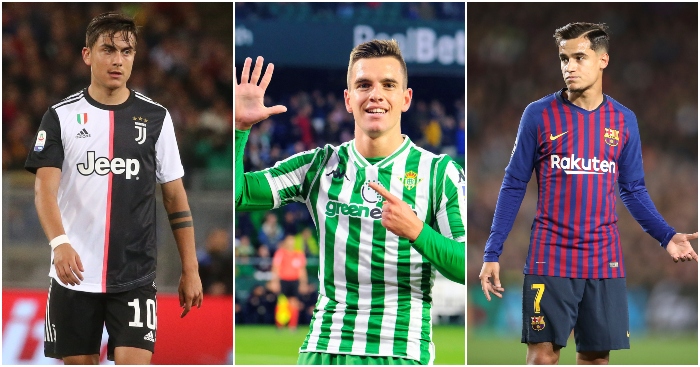 Tottenham fans find themselves in a familiar position of going into the final days of the transfer window still waiting on a deal or two to be completed.

At least they’ve already made more signings than last summer, with Tanguy Ndombele and Jack Clarke arriving, even if the latter has gone straight out on loan.

Three men still on their radar are Giovani Lo Celso, Paulo Dybala and Philippe Coutinho. Each has been mentioned in connection with a move to north London, so we’ve compared the trio’s respective stats for the 2018-19 league season.

As someone who has traditionally occupied a more advanced role, you might expect Dybala to comfortably lead the way here. However, the emergence of Moise Kean limited his options at Juventus and he picked up just five goals and four assists in Serie A last season.

Lo Celso scored nine times and set up a further four after joining Real Betis from Paris Saint-Germain, while Coutinho – who made more than a third of his appearances from the bench – finished on just five and two respectively.

Of course, not every player gets the same number of minutes, so we’ve also looked at how frequently these contributions rolled around.

Dybala averaged a goal or assist every 237.4 minutes in the league, while Lo Celso took 184.7 minutes to do the same and Coutinho 289.

Paulo Dybala: Has scored more goals from outside the box (18) than any other player since the start of the 2015/16 Serie A season

Goal and assist tallies can give a clue to a player’s performances in a season, but they should never be read as the be all and end all.

After all, sometimes a team-mate will have an off-day and what should have been another assist to add to the tally ends up being another wasted chance.

This is where key pass stats come into focus, and Dybala (1.7 per game) is comfortably ahead of Lo Celso (0.8) and Coutinho (0.9) in this department. Perhaps we can blame Cristiano Ronaldo for the assist numbers not being higher.

His 1.7 dribbles per game also put him higher than Coutinho, who managed 1.5, but Lo Celso came out on top here with 2.

Lo Celso ought to come out on top here, having occasionally played deeper for PSG and Argentina, while Coutinho was by and large considered the more attacking option at Camp Nou and Dybala was a goalscorer at Palermo before continuing along the same lines in Turin.

Sure enough, the midfielder is streets ahead when it comes to tackles, clocking up 1.6 on average in the 2018-19 league season – more than Dybala (0.6) and Coutinho (0.5) combined.

It was a closer-run thing on interceptions, with both Argentines averaging 0.5 and Coutinho just behind at 0.4.

With Spurs’ energetic, high-pressing game, it’ll be interesting to see how the arrival of any one of the trio will impact on the way Mauricio Pochettino’s team plays the game.

Coutinho: Only Erick Pulgar (19) made more tackles than @Phil_Coutinho (17) at the 2019 Copa America