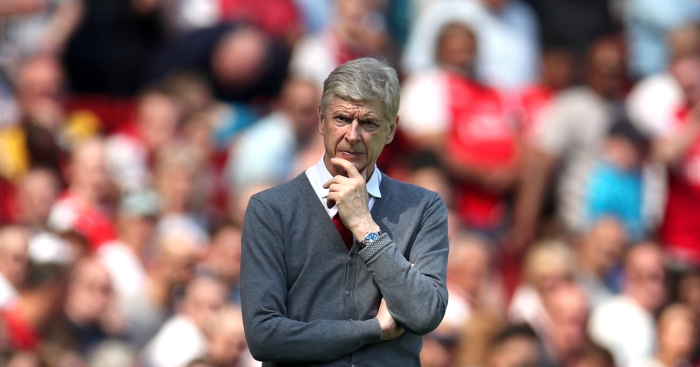 Arsene Wenger will end his 22-year association with Arsenal at the end of the current season – prompting plenty of speculation about who will replace the Frenchman.

Wenger has won three Premier League titles and lifted the FA Cup a record seven times in his lengthy spell in charge of the club, and many credit him with changing the face of modern English football.

We’ve taken a look at some of the names reportedly in the running to replace Wenger to see who might be the best fit at the Emirates.

Enrique’s managerial career began in 2008 with Barcelona B, where he replaced Pep Guardiola in the role. He guided them to the Segunda Division before making the play-offs in his final season, although they were ineligible for promotion to the top tier.

In 2011 he joined Roma, where a difficult season saw his side dumped out of the Europa League by SK Slovan Bratislava and fail to qualify for Europe, meaning he left after one season having won just 40.5% of his games.

An impressive season in charge at Celta Vigo saw him appointed Barcelona manager in 2014, and in three years in charge he won the Champions League, La Liga twice and lifted the Copa Del Rey in every season – after the club had managed to win just one trophy out of nine prior to his arrival.

Luis Enrique isn't my number one choice but I mean come on: won everything with Barcelona, plays attacking, high intensity football, managed world class players with massive egos. I'd trust him to turn things round much more than Vieira or Arterta.

A dramatic downturn in form in 2016 saw Enrique’s side lose four out of five – after going 39 unbeaten – but his response may encourage Arsenal fans.

“I like adversity, that’s how I am,” he said. “I want to turn this around, win tomorrow and put on a show. I want to delight the fans who are behind us and can’t explain this situation.”

Across his four managerial appointments, Enrique has lost just 80 of his 387 matches, winning 59.2% of those. At Barcelona, he won over three quarters of his games in charge.

Luis Enrique will look to sign Andres Iniesta if he replaces Arsène Wenger as Arsenal manager. [AS] pic.twitter.com/3pCN7fTgGc

After coaching the youth teams at Manchester City, Vieira was handed his first managerial job across the pond, taking over New York City for the start of the 2016 MLS season.

The club had finished 17th in the overall table in its inaugural season, before Vieira guided them to fourth in 2016 and then second last year.

They currently sit top of the overall table after taking 17 points from their first eight games, with pundits generally praising the former Arsenal captain for the job he has done.

Patrick Vieira: “It's an honour to be mentioned with Arsenal – I love the club. I am always going to have a deeper relationship with Arsenal. That is not enough to coach that team but I'm ready to coach any side in Europe.”

Vieira said he has even learned from Wenger’s struggles over recent years, with his former manager even lending his espertise to his trusted ex-captain.

“You know that you will have ups and downs during the season,” Vieira said.

Craig Bellamy and Ray Parlour agree Patrick Vieira is a suitable candidate to become the next @Arsenal manager. #TheDebate https://t.co/6J5DmLTlI0

Beginning his managerial career in 2006, Simeone took charge of six clubs before settling at Atletico Madrid in 2011.

‘Brutally effective’ is a phrase synonymous with the Argentine’s approach to games, which suggests he may suit the Premier League in general and act as a catalyst for change at the Emirates.

“Far from parking the bus, Atletico aggressively defend the ball like a dog with any sort of toy,” wrote The Telegraph in 2016.

“Atletico are good without being superstars but become a relentless winning machine with the intense tenacity and commitment to the cause that Simeone has brought to the club.”

Arsenal's net over the last 5 seasons is just over £160m, works out £32m a season, if they're gonna refuse to spend over the next 5 as well, Simeone is the best option out there, he's working under an even tighter budget.

The manager himself has said: ”Atletico are about passion, hard work, humility. If you don’t give it your all and I can feel it, someone else will take your place. Nothing is guaranteed, and if you fall asleep, you’re out.”

All of this will be music to the ears of Arsenal fans.

Simeone’s Atletico have conceded an average of just 0.74 goals per game since he took charge, scoring 1.76.

Imagine the grit Diego Simeone would give Arsenal. He'd bring in a few bastards of the Diego Costa mould, so that bastards like Diego Costa no longer steamroller them.

He has won four league titles, the Champions League three times and five domestic cups across those clubs, having started out a manager at Reggiana in 1995.

“Discipline, following rules, and respect are important to me,” the Italian said when describing his style.

“I try to talk to everyone and – what is even more important – listen to everyone. Eye to eye. I like to have a good relationship with my players. Many people confuse that with softness – but that is not quite right.”

Ancelotti, who has also been touted as the next Italy manager, was sacked at Bayern despite losing just nine of his 60 games in charge, finishing with a 70% win ratio.

"If they were interested, it would give me pleasure."

Rodgers was one of the first names to be linked with the Arsenal job following an impressive two seasons at Celtic which look set to end with a second successive treble.

The former Chelsea youth coach shot to prominence in charge at Swansea City, who he guided to the Premier League for the first time before establishing them in the top flight and then joining Liverpool.

His spell in charge at Anfield saw him win 50% of his matches, lasting just over three years before he was sacked in October 2015 and then joined Celtic the following summer.

“He is someone who demands a certain level from himself. He demands that level from his followers, the players and the staff,” Rodgers’ assistant Chris Davies recently said.

“He’s extremely hard working, dedicated to his profession and a winner. The players feed off that. They see Brendan as being relentless so they can be relentless.”

All depends what kind of manager Arsenal want. If emphasis is on youth, building, playing style, entertaining, reinvigorating the place — not overnight, but long term — then Rodgers should certainly be on their list. They could do a hell of a lot worse

“His one-on-one management is the best I have known,” former Liverpool captain Steven Gerrard said. “He makes you go out on to the pitch feeling a million dollars — full of confidence and belief.”

At Liverpool, Rodgers averaged 1.77 points per game, a number which has rocketed to 2.30 at Celtic.

Another former Arsenal midfielder, Arteta is also reported to be high on the shortlist despite never having managed a club before.

After his retirement, the Spaniard joined up with Pep Guardiola as his assistant at Manchester City, where he has now been for two years.

“We need to be open-minded and also brave in the decision. When Arsene was appointed, I don’t think he was on many people’s radar,” Gazidis said, prompting suggestions they could go for someone in the mould of Arteta.

Manchester City would not stand in the way of Mikel Arteta if Arsenal offer him the manager's job. He is one of the main candidates to succeed Arsene Wenger. [The Times]

Nicknamed the ‘mini Mourinho’, Nagelsmann ended his playing career as a teenager due to persistent knee injuries, coaching youth teams before working as an assistant at Hoffenheim from 2012.

The young coach was appointed manager in February 2016, taking over with the club seven points from safety and going on to win seven from 14 to finish above the relegation and relegation play-off spots.

That excellent form continued and his side finished fourth in 2017, earning a place in the Champions League for the first time in the club’s history, only to meet Jurgen Klopp’s Liverpool in the qualifying round.

Either Nagelsmann or Tedesco – both very young, but with decent experience. pic.twitter.com/o035ESzSre

“I like to attack the opponents near their own goal because your own way to the goal is not as long if you get the ball higher up,” Nagelsmann said.

“I like the way Villarreal play and they have a great way of coaching young players. I also like Barcelona and Arsenal as well as the work of Arsene Wenger.”

He has averaged 1.59 points per game at Hoffenheim, who currently sit two points off fourth spot in the Bundesliga.

The head coach has had his contract extended to 2021 after winning 42.86% of his games in charge, his side scoring an average of 1.80 goals per game.

Hoffenheim finished 4th in '16/17, and lost their 2 best players (Rudy+Sule) to Bayern. This term they are 5th in the table.
TSG are 8th richest Bundesliga club, rank 7th in avg player salaries.
Nagelsmann is doing an even better job than last term.
Fits the ball for #afc pic.twitter.com/SEIaVNZCS0