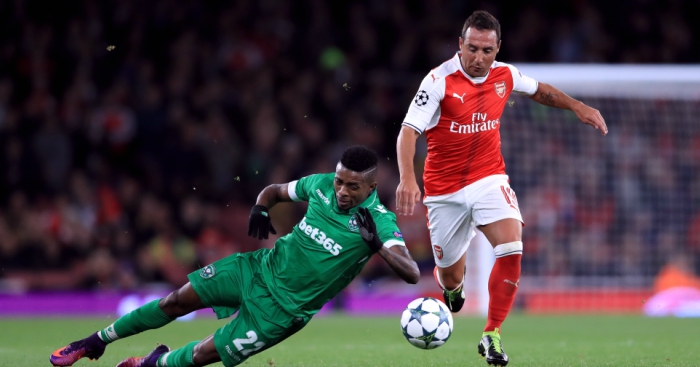 Outgoing Arsenal manager Arsene Wenger revealed this week that he hasn’t seen Santi Cazorla since the League Cup final back in February.

The popular midfielder hasn’t played since 2016, initially injuring his achilles before numerous complications have left him sidelined indefinitely – with Wenger unsure whether he will ever play for the club again.

It is now 18 months since Cazorla played in a 6-0 Champions League rout over Ludogrets, his last appearance in an Arsenal shirt, and we’ve taken a look back at the side that took to the field that night, comparing it to the XI which stumbled to a 2-1 defeat at Newcastle United in the Gunners’ previous outing.

Cech was among the substitutes for the match against Ludogrets, while the roles were reversed for Arsenal’s recent league meeting with Newcastle.

Ospina joined the club in 2014 with a view to becoming their new long-term No.1 following an impressive World Cup, but Cech was brought in a year later and the Colombian has been their ‘cup goalkeeper’ ever since.

Bellerin was rested for the defeat against Newcastle after Wenger’s side progressed to the semi-finals of the Europa League, though the Spaniard is firmly established as Arsenal’s first-choice right-back.

Another player rested for the trip to Newcastle was Koscielny, who is one of Arsenal’s longest-serving players.

Former Bolton youngster Holding, meanwhile, appeared set for a real breakthrough season this term but after a confident start on the right of a three-man defence, he has found himself out of the side.

The 22-year-old joined Arsenal in the summer of 2016 and produced an assured performance against Diego Costa in last season’s FA Cup final.

The only consistent between the two teams, Mustafi had just joined Arsenal for a reported £35million around the time of Cazorla’s last few appearances.

The former Everton youngster has been a regular alongside Koscielny in the heart of defence, but his form has led to plenty of criticism from supporters and pundits alike.

Mustafi is the joint-fourth most expensive signing in Arsenal's history at £35m (same as Sanchez, only Aubameyang, Lacazette and Ozil cost more). Apparently that money doesn't buy you an awareness of how to defend the near post. Second Sunday in a row he's been caught out.

An unheralded signing in 2013, Monreal became a regular in 2015 and has even played as a left centre-back at times over the past two season.

Gibbs was coming to the end of his Arsenal career in 2016, playing just 15 times in the Premier League before that tally went down to 11 in the 2016-17 campaign.

The youth product finally left the Emirates last summer, and now looks set for relegation with new side West Brom.

Another extended bit-part player, Coquelin left the Emirates in January to join Valencia. The Frenchman left Arsenal without ever scoring a goal for the Gunners, but has already scored once in 11 appearances for the Spanish outfit, only to be ruled out for the rest of the season with an achilles injury.

Like Cech, Xhaka was also among the substitutes for the win against Ludogrets. The midfielder had in fact just picked up his first Arsenal red card against Swansea at the weekend.

He finally appears to be silencing his critics having sorted out the much-documented disciplinary issues, and has looked to be the driving force from midfield in recent months.

Granit Xhaka is a model professional and insane worker.

Came to England and was criticized for getting too many red cards – Hasn’t gotten one all season.

Then was crucified for his defensive errors and lapses in focus, once again didn’t complain and fixed it.

In what proved to be Cazorla’s last appearance for Arsenal, the midfielder was taken off just after assisting Mesut Ozil for the hosts’ fourth goal in the 6-0 rout.

Cazorla was taken off with an achilles injury which should have kept him out for just three weeks, though various complications and operations have left him still sidelined 18 months later.

Elneny in fact replaced Cazorla in the 2016 Champions League clash, having joined the club in January of the same year.

Fifty assists in 142 Premier League appearances five years after moving from Real Madrid, Ozil is a vital cogs in the Arsenal machine, but was rested for the recent trip to Newcastle with the Europa League semi-final of the horizon.

The German netted a second half hat-trick against Ludogrets to complete his only Arsenal treble to date, adding on to his assist for Theo Walcott before the break.

Willock was handed his full Premier League debut in Ozil’s place, putting in a decent performance which left fans excited about what the future could have in store for the 18-year-old.

To make my full @premierleague debut for this beautiful club is a dream come true for me. I’m sorry we couldn’t bring you the result you deserve❤️👊🏾 thanks for the support pic.twitter.com/us3ASqnegS

Six years after joining Arsenal as a fresh-faced 17-year-old, Oxlade-Chamberlain left the Emirates for Liverpool in the summer and has gone on to excel with regular football.

Now settled in his preferred central midfield position, Chamberlain now seems certain to go to Russia for this summer’s World Cup having scored five goals and provided seven assists in 40 appearances this term.

Still just 21, Iwobi came off the bench against Ludogrets and has made 92 first-team appearances for Arsenal since his debut in 2015.

After almost a goal every other game in three-and-a-half years, Sanchez got his wish in January as he was moved on to Manchester United.

Lacazette has struggled for consistency since joining Arsenal last summer, though the signs of a decent partnership with January signing Pierre-Emerick Aubameyang appear to be emerging after the pair have begun to appear together recently.

You wanted it, you've got it 👊@LacazetteAlex and @Aubameyang7 both start for us in #NUFCvAFC pic.twitter.com/L43kISPYzJ

Another to cut short a long association with Arsenal this season was Theo Walcott, ending a 12-year stay by moving to Everton for around £20million.

Aubameyang finally completed a long-mooted move to London late in January for a club-record £56million fee, and has so far managed six goals in eight Premier League appearances.