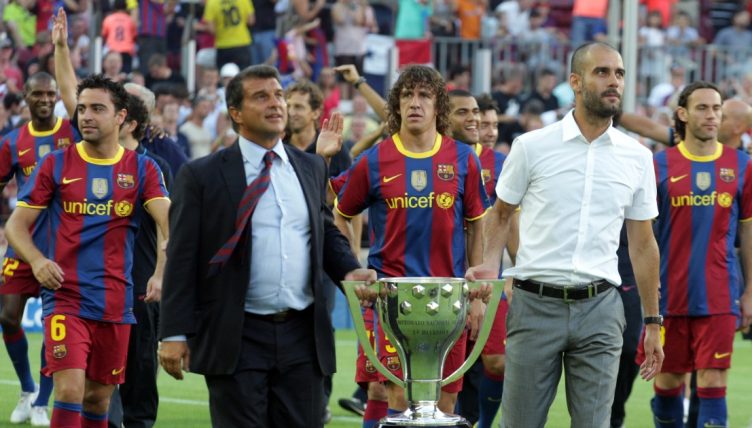 Joan Laporta is currently serving a challenging second stint as Barcelona president. His first was filled with legendary success, and given Barcelona’s current financial woes it would be a major achievement if he can replicate it this time around.

The charismatic Barcelona-born lawyer last served as president for seven full seasons between 2003 and 2010, with the club winning four league titles and two Champions Leagues in that time.

We’ve looked at the first starting XI during his initial presidency, a 1-0 away win at Athletic Bilbao in 2003, and compared it to the team that celebrated winning the 2009-10 La Liga title with a 99-point haul after thrashing Real Valladolid 4-0.

Such was the goalkeeper’s longevity at his boyhood club, Valdes’ near 20 years from the youth set-up to the senior team saw six different presidents in charge of the club.

He also played under six different managers since his debut in August 2002, eventually leaving in the summer of 2014, as the Luis Enrique era began with two new faces competing for a spot between the sticks with Marc-Andre ter Stegen eventually winning out over Claudio Bravo.

Part of Louis can Gaal’s seminal Ajax side, Reiziger reunited with his Dutch compatriot at the Camp Nou in 1997.

He won back-to-back league titles in his first two years at the club, but a further five trophyless years would follow, as Barcelona kicked off the noughties with a fallow period.

Former Ajax team-mate Frank Rijkaard – who he started alongside in 1995 Champions League final, a famous 1-0 victory over Milan – used the right-back regularly during his first season in charge before he was allowed to leave for Steve McClaren’s Middlesbrough in the summer of 2004.

Juliano Belletti, Damia and Gianluca Zambrotta appeared at right-back in subsequent years before Alves came to define the position, arriving the same summer as Guardiola and winning 13 major honours in eight wildly successful years at the club.

The Brazilian’s signing in 2008 was a real triumph of the Laporta presidency. He was so good the first time round that Laporta sanctioned a return for the 38-year-old earlier this season. 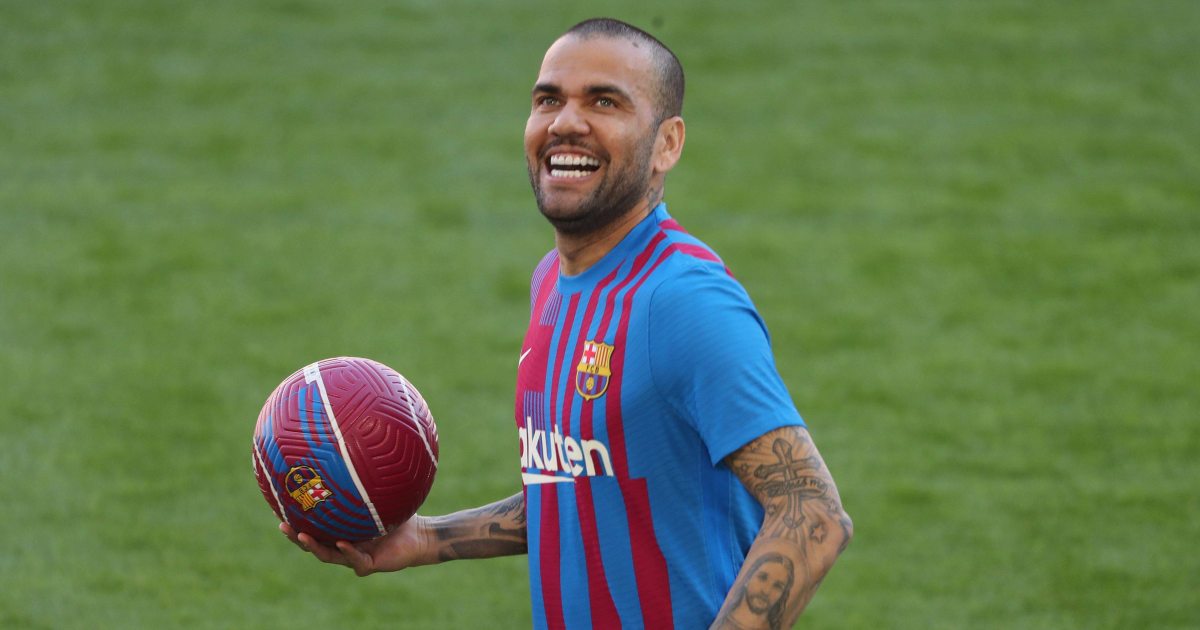 READ: Dani Alves is bringing ‘Good Crazy’ back to Barca one nutmeg at a time

El Tiburon (‘The Shark’) will always enjoy legend status at the only club he ever represented.

Since retiring in 2014, he remains a prominent voice on all matters Barcelona, and the former centre-half was seen casting his vote at the 2021 Barcelona presidential elections.

Puyol subsequently congratulated Laporta – under whom he enjoyed the most successful years of his 15-year career – on his return to office.

Part of a sizeable Dutch contingent at the turn of the century, Cocu departed alongside Reiziger, Patrick Kluivert and Marc Overmars in the summer of 2004, while Edgar Davids returned to Italy after a successful half-season loan.

Barcelona didn’t earn a penny for any of them leaving, but they helped make space for the likes of Samuel Eto’o, Deco, Sylvinho and Ludovic Giuly to arrive.

Cocu frequently captained the side during his year serving under Rijkaard, and while he predominantly served as a midfielder, his versatility saw him slot in at centre-back for the win at Sam Mames. He scored the match-winner on that occasion, getting on the end of a Ronaldinho cross.

A 16-year-old Gerard Pique was still turning out in the youth ranks at that point before he went on to spend a four-year stint at Manchester United. Laporta and Guardiola brought him back for a reported £5million fee in the summer of 2008 – and the rest is history.

Van Bronckhorst made his La Liga debut in the win in Bilbao, having originally joined on loan from Arsenal, which was the start of his adaptation period from midfielder to left-back.

A permanent move was sealed a year later, and two league titles and the Champions League swiftly followed.

Abidal was signed from Lyon as his replacement in the summer of 2007, and the Frenchman would go on to become a stalwart of the Guardiola era.

Into his sixth season since graduating from La Masia in 1998, Xavi wasn’t even a third of the way through his glittering Barcelona career back in 2003.

The legendary midfielder reportedly turned down an approach to manage his former club in 2020, reportedly amid concerns over the board.

But reuniting with a president under whom he won 11 pieces of silverware as a player proved way more appealing – and Xavi is back in the dugout now, with Laporta hoping he can emulate fellow legendary local lad Guardiola.

Fellow academy graduate Busquets would later make hundreds of appearances in midfield alongside Xavi, having first been promoted from the B team by Guardiola. 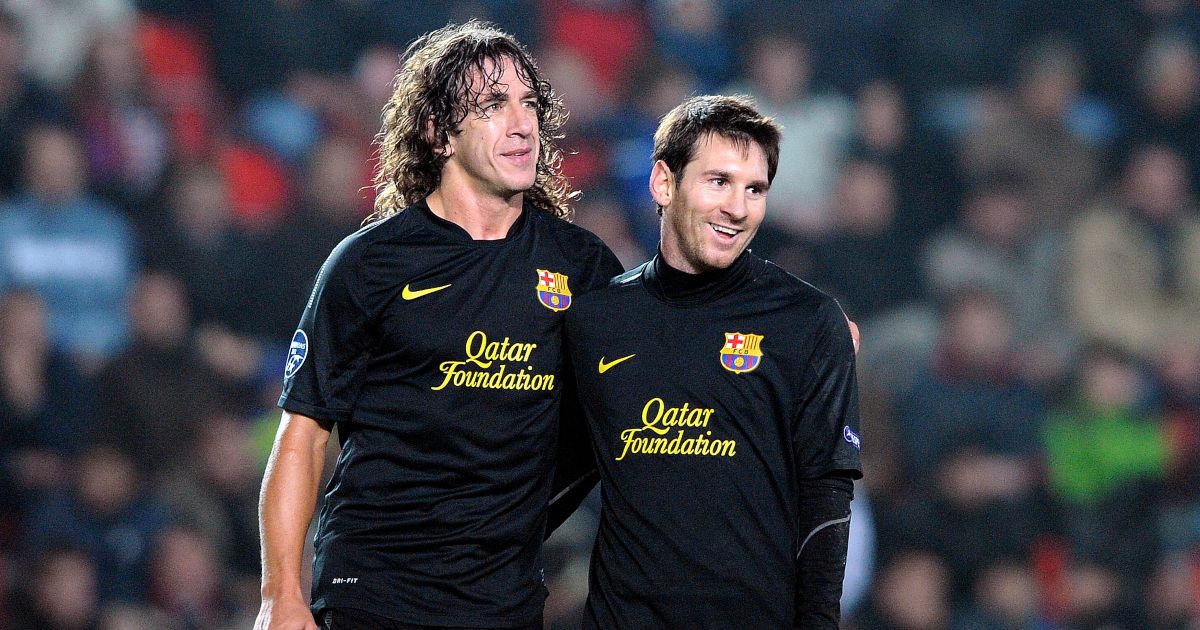 Joining Barcelona at the turn of the century, squad player Gerard Lopez made 91 La Liga appearances during his five years with the club. He left for Monaco in 2005 but returned as a coach a decade later and served as the B team manager for three years.

Toure, brought in from Monaco in 2007, continued his ascent to superstardom in the first couple of years of Guardiola’s reign before being sold for £24million to Manchester City in 2010.

Spain international Luis Enrique retired at the end of 2003-04 season, closing out a career that saw him make over 200 appearances for Real Madrid and over 300 for Barcelona. By the time he returned as manager 10 years later, only Xavi and Andres Iniesta (both notable absences from the 2010 thrashing of Valladolid) remained.

Malian midfielder Keita’s four years at the club coincided with Guardiola’s, having arrived alongside Alves from Sevilla when Pep succeeded Rijkaard in 2008. He made 188 appearances under the Catalan coach, winning 14 trophies.

Laporta had famously run his presidential campaign on promising the signature of David Beckham. He could never deliver that but getting Ronaldinho instead worked out pretty well in the end.

The Brazilian made his Camp Nou debut with a midnight kick-off against Sevilla, but his first competitive appearance for the club came at San Mames the week before. Whipping in the free-kick for Cocu’s winner, that set the tone for what was to come.

Breathtakingly fun at his peak, Ronaldinho won the Ballon d’Or in 2005, helping his club win back-to-back league titles and the Champions League, but he started to wane amid suggestions of loving Barcelona’s nightlife a little too much.

“I want you to meet the player who is going to be the greatest player who ever lived,” he’s said to have told Kobe Bryant, when introducing the Basketball star to a teenage Messi around that time. Not a bad shout.

🗣 "I don't consider myself the greatest player in Barça's history because it's Ronaldinho. He wasn't simply passing the ball, he was passing the torch to me."

Lionel Messi's first goal for Barcelona was special for a number of reasons! 🐐pic.twitter.com/CX3uvsjedW

There have been suggestions over the years that Barcelona’s scouts looked at the rising stars coming through at Sporting Lisbon and opted for Quaresma ahead of Cristiano Ronaldo. An early misstep of the Laporta presidency, then.

The former Portugal international has done some wonderful things on a football pitch, but few of them came in a year to forget at Barcelona. This was one of only 10 La Liga starts for the club before returning to Portugal, signing for Porto a year later.

Pedro, like Busquets, was brought up from the B team by Guardiola, and first really broke through in the 2009-10 campaign. He scored his 23rd goal of that season in the 4-0 win over Valladolid, which remains his career-best tally to this day.

Argentinian forward Saviola scored a not-too-shabby 49 goals in 123 La Liga appearances for Barcelona, but he was loaned away to Monaco and Sevilla during their title-winning years of 2004-05 and 2005-06 and didn’t have any silverware to show for his four years in Catalunya.

Bojan, meanwhile, was selected ahead of the likes of Thierry Henry, Zlatan Ibrahimovic and Iniesta for the final-day victory lap win over Valladolid. At that point in his career, he probably didn’t foresee spending five years on Stoke City’s books.