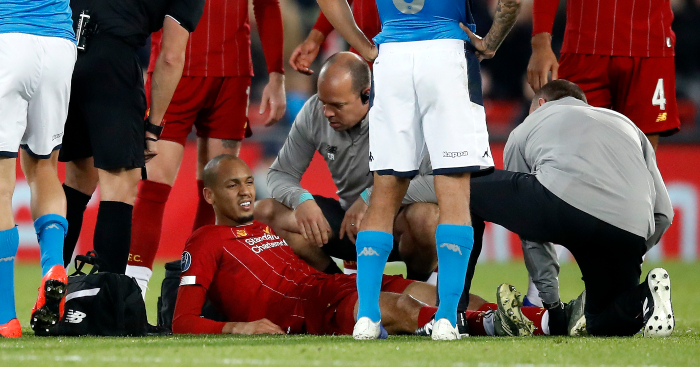 Liverpool may be streaking away at the top of the Premier League, but the Reds have hardly have a clean bill of health to thank for their success so far this season.

The Premier League’s ‘big six’ may have an advantage of the rest of the competition when it comes to their financial muscle, but they still need to rely on luck when it comes down to injuries.

Using figures from Transfermarkt’s absence tracker, we’ve compared the big six’s injury records over the course of 2019-20 to date.

After managing to keep the majority of their biggest stars fit last season, Liverpool have been left to rue their luck on the fitness front in 2019-20.

Among the backline, regulars Alisson Becker (seven league games out) and Joel Matip (12 and counting) have faced lengthy spells on the sideline, with back-up options Dejan Lovren and Nathaniel Clyne also currently absent.

In midfield, Fabinho, Naby Keita, Alex Oxlade-Chamberlain and Xherdan Shaqiri have all missed at least four matches or more.

Jurgen Klopp has at least been able to rely on his front three throughout the campaign, with only Mo Salah missing a game through injury.

Perhaps the biggest factor in City’s (relative) struggles this season has been the long-term of Aymeric Laporte, who played in the first four games before succumbing to injury, while fellow centre-back John Stones has also struggled to stay fit.

Injuries to Benjamin Mendy (four league games out) and Oleksandr Zinchenko (five games) have also given Pep Guardiola a headache at left-back at times during the campaign, while Leroy Sane continues to recover from a serious injury suffered in pre-season, although his future at City was already in doubt amid interest from Bayern Munich.

City were also given a worry when Sergio Aguero missed four league games after picking up a knock towards the end of November, with Rodri also ruled out for two league fixtures earlier in the campaign.

📰| Manchester City defender Aymeric Laporte expects to make his long-awaited comeback from injury before the end of January.

Frank Lampard has been hamstrung by his inability to sign players since arriving at Chelsea, and he has also suffered plenty of misfortune on the injury front.

Antonio Rudiger missed much of the first half of the season due to a groin injury, while fellow defenders Andreas Christensen, Reece James and Emerson Palmieri have also been absent for short spells.

Ruben Loftus-Cheek is yet to play in 2019-20 due to a serious Achilles injury, with Callum Hudson-Odoi missing the start of the season as he recovered from a similar issue.

Marco van Ginkel has been injured for the past 18 months, although we’re not sure he really counts, and Ross Barkley and N’Golo Kante have missed six league fixtures each.

Christian Pulisic now faces a few weeks out, but Chelsea have been relatively unscathed in attack; Tammy Abraham has managed to stay fit and Pedro and Willian have only missed one Premier League game each through injury.

Ole Gunnar Solskjaer may be under scrutiny in the Manchester United hotseat, but the manager could reasonably point at the injury list as an excuse for some of Manchester United’s inconsistencies.

Paul Pogba has made just seven Premier League appearances, while Eric Bailly, Diogo Dalot and Timothy Fosu-Mensah have all been unavailable for the majority of the season.

Luke Shaw (10 games), Anthony Martial (five games), Nemanja Matic (nine games) and Axel Tuanzebe (four games) have all been forced to watch on from the sidelines at various stages.

Don’t see this from Scott McTominay… clearly trying to get a move away in January. https://t.co/7MxzJ10qAe

Like Solskjaer, Jose Mourinho may be able to point at the players currently out of action in north London.

Hugo Lloris has out since October, missing 14 league games to date. Likewise, Harry Kane now faces a lengthy spell on the sidelines.

In defence, Jan Vertonghen has missed three matches, Juan Foyth was ruled out for six at the start of the season and Ben Davies has missed nine games as he continues to recover from an ankle injury.

Tanguy Ndombele’s fitness has already been questioned by Mourinho after a couple of spells on the sidelines, while Giovani Lo Celso missed five games shortly after arriving from Real Betis. Another new signing, Ryan Sessegnon, arrived injured and was unavailable for the first 10 league fixtures of the season.

Erik Lamela, meanwhile, was ruled out for nine matches between October and December, Eric Dier and Serge Aurier have missed one game each and Dele Alli was absent for the first two matches of the season.

One of the many frustrations for Arsenal this season has been the injury issues faced by new signing Kieran Tierney. The left-back was sidelined for the first five league matches of the campaign with a hip injury, while a shoulder injury has ruled him out of the Gunners’ last six fixtures and he is unlikely to return until March.

Hector Bellerin was similarly ruled out of the first five matches of the season as he recovered from a serious knee injury and has missed the last seven league fixtures after picking up a hamstring injury in the warm-up prior to the win at West Ham.

Another new signing, Dani Ceballos, was unfit for nine matches between November and the end of January, while forwards Alexandre Lacazette and Gabriel Martinelli were ruled out four and three games respectively earlier in the season.

Konstantinos Mavropanos also missed a lengthy spell at the start of the campaign, although the defender has just been loaned out to Nuremberg and would only have been on the periphery of the first team.