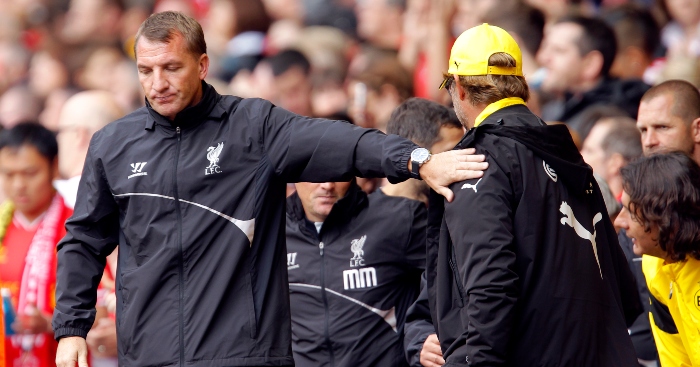 Brendan Rodgers’ time in charge of Liverpool may be viewed unfavourably in comparison to Jurgen Klopp’s tenure – but the Northern Irishman oversaw a big squad transition at Anfield.

Rodgers infamously fell just short of delivering the Premier League title to Liverpool in 2013-14 and was ultimately unable to generate that momentum again, but some of his signings proved useful for his successor.

We’ve taken a look at the team he inherited from Kenny Dalglish’s final game in charge of the Reds, a 1-0 defeat at Rodgers’ Swansea City in May 2012, to the team Rodgers left behind for Klopp after he was sacked following a 1-1 draw at Everton in October 2015.

While Pepe Reina was Liverpool’s first-choice goalkeeper for Dalglish’s final season, Doni actually started the final league match of the campaign and was unable to prevent Danny Graham’s winner.

Reina continued as No.1 in Rodgers’ first season, only to leave to be reunited with Rafa Benitez at Napoli in 2013-14 after Simon Mignolet arrived from Sunderland to establish himself as Rodgers preferred option between the sticks.

And Mignolet was the man in goal for that 1-1 draw at Goodison Park, producing two excellent saves, without which Rodgers would have left Liverpool off the back of a Merseyside derby defeat.

Fun fact… Mignolet has the best penalty saves percentage (29%) in Premier League history. Faced 28 penalties and saved 8 of them.

Looking at the Liverpool defence deployed by Dalglish at the Liberty Stadium feels like a delve back into a different era, with the Reds fielding a back four of Martin Kelly, Jamie Carragher, Daniel Agger and Glen Johnson.

None of that quintet were on the books at Anfield by the time Rodgers was given his P45, with Emre Can, Martin Skrtel and Mamadou Sakho utilised in a back three and Nathaniel Clyne and Alberto Moreno acting as wing-backs at Goodison Park.

Clyne remains at Liverpool under Klopp, albeit having suffered with injuries in the last two years, while Moreno only left in the summer with a Champions League winners’ medal to boot (yes, we know).

Skrtel and Sakho, meanwhile, were allowed to leave within Klopp’s first two seasons at the helm, although both provided notable contributions under the German at times.

Can was also a favourite of Klopp’s for a period, albeit in his preferred midfield role, before leaving on a free transfer for Juventus.

Liverpool talisman Steven Gerrard was absent from Dalglish’s final game as manager, as he opted for a midfield four of Stewart Downing, Jordan Henderson, Jonjo Shelvey and Maxi Rodriguez.

Henderson is the only player from Dalglish’s final XI to remain at Liverpool, having gone through a number of ups and down to revitalise himself under Klopp last season, captaining the side to Champions League glory.

The England international missed Rodgers’ final game due to injury, meaning Liverpool lined up with James Milner and Lucas Leiva in more reserved central midfield roles – supported by Clyne and Moreno on the flanks – and Philippe Coutinho as a No.10.

“When he left, we both had a little tear in our eye,” Klopp told ESPN. “It was really a special moment.”

Coutinho was one of Liverpool’s star players throughout his time at Anfield, under both Rodgers and Klopp, yet his big-money sale has actually helped the Reds find a better balance in their team.

While Liverpool under Klopp are best known for their lethal front three of Mo Salah, Roberto Firmino and Sadio Mane, in both the defeat at Swansea and draw at Everton, the Reds opted for a front two to lead the line.

Dalglish’s final season was the first full campaign for expensive January 2011 signings Luis Suarez and Andy Carroll, who drew a blank against Swansea but ultimately had very different fortunes at Liverpool under Rodgers, with Suarez starring as they came so close to the title in 2013-14 and Carroll swiftly bombed out upon his appointment, joining West Ham initially on loan.

Rodgers, meanwhile, used the services of two strikers who have only just officially left Liverpool this summer.

Danny Ings scored their only goal at Goodison Park, but his Liverpool career was ultimately decimated by serious injury, and he made his loan move to Southampton permanent ahead of the 2019-20.

And Ings was partnered in attack by Daniel Sturridge, who was constantly in and out of favour under Klopp and never reached the same heights as he managed playing alongside Suarez.