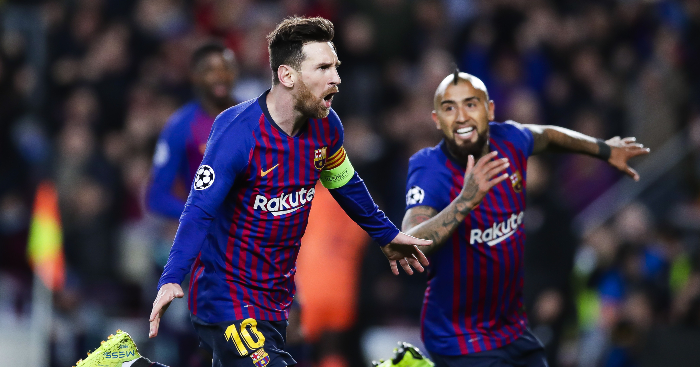 Manchester United have been drawn against Barcelona in the Champions League quarter-finals in a mouth-watering tie – but how do their forwards’ stats compare?

The pairing brings back memories of the 2009 and 2011 Champions League finals, but plenty has changed since then.

Barcelona have consistently got to the latter stages of this competition, winning it again in 2015, while this is only United’s second quarter-final since that last final.

The personnel has changed quite a bit, too.

Barcelona no longer have the likes of Thierry Henry, Samuel Eto’o or David Villa and Pedro up front, though they still have Messi.

Manchester United are almost entirely different, with Wayne Rooney, Cristiano Ronaldo and Javier Hernandez now relics of their past.

Here’s how they compare.

Barcelona lead La Liga for the most goals scored, with 69 so far. That’s 22 more than the next most prolific scoring team, Real Madrid.

Only Man City (79) and PSG (83) have scored more league goals in Europe’s major leagues so far this season, while United have as many goals as points: 58.

Unsurprisingly, Messi has scored more league goals than everyone else in Europe, with 26. He also leads the Champions League scoring charts with eight so far.

Of Barcelona and United’s forwards, he’s the only one to average a goal per game, scoring every 79.5 minutes in the league and every 59.6 minutes in Europe.

Of the other Barcelona and Man Utd forwards, Messi’s team-mate Suarez is the next most prolific, with 17 goals in the league so far, averaging one every 129.4 minutes. In Europe, though, he’s yet to score.

There’s only one clear winner between the two players Barcelona signed to replace Neymar: Dembele averages a goal every 172.8 minutes in La Liga and 135.6 minutes in Europe, while Coutinho has half as many league goals (just four to Dembele’s eight) despite playing more minutes – the Brazilian averages a goal every 388.2 minutes in the league, and every 297 minutes so far in the Champions League.

Martial is United’s most regular goalscorer in terms of goals per minute, averaging one every 144.2 in the league, but Lukaku isn’t far behind with a goal every 148.6 minutes, and the Belgian is also their top scorer in the Premier League with 12 in total so far, while Rashford averages a goal every 200.8 minutes.

In Europe, the Red Devils forwards have been less prolific. No player has more than two goals yet.

Rashford averages a goal every 283 minutes, Martial has one goal from 420 minutes, while Lukaku brought his average right down to one every 230.5 minutes with his brace against PSG, his first goals in the competition so far.

Not only does Messi lead Europe in terms of goals, but he also leads with assists, with 12 in total, and is one of just three players in Europe’s top five leagues to hit double figures for both goals and assists.

Dembele averages an assist every 345.7 minutes in the league and 407 in the Champions League.

This is another area in which Coutinho is struggling. He only averages an assist every 776.5 minutes in the league, with his combined total of six goals and assists to the same as midfielders Ivan Rakitic and Arturo Vidal, despite nominally being a more offensive player in further forward positions.

He’s been better in Europe though, with three assists in 594 Champions League minutes, averaging one every 198 minutes.

At United, Lukaku is yet to register a league assist in 1784 minutes, with one in the Champions League.

Otherwise, only Ashley Young, Fred and Paul Pogba have registered a Champions League assist so far, with one each – none of their other forwards have.

In the league, Rashford averages an assist every 263.66 minutes, Rashford every 301.33 minutes, and Martial every 649 minutes.

Messi assists Pique against Lyon in the Champions League

Pogba is United’s most prolific dribbler with 1.7 per league game. Of their forwards, Martial, Rashford and Lukaku average 1.2, 0.8 and 0.7 respectively. In Europe, Martial averages 1.8, Lukaku 1.1, Sanchez one and Rashford 0.8.

This is a recurring theme for United’s forwards. They might lag behind Barcelona’s forwards in most attacking metrics and end product (goals and assists), but in Pogba they have a player contributing more from the middle third a lot more than any of Barcelona’s midfielders.

Once again, Messi is up there with the very best in Europe when it comes to dribbling, with an average of 3.9 completed per league game.

In the Champions League, Messi and Coutinho both average 2.3, Dembele averages 1.8 and Suarez 1.3.

Those numbers shoot up in Europe, with Messi averaging 6.2 shots per game, Suarez 5, Coutinho 3.5 and Dembele 2.7.