Comparing the stats of the best World Cup midfielders 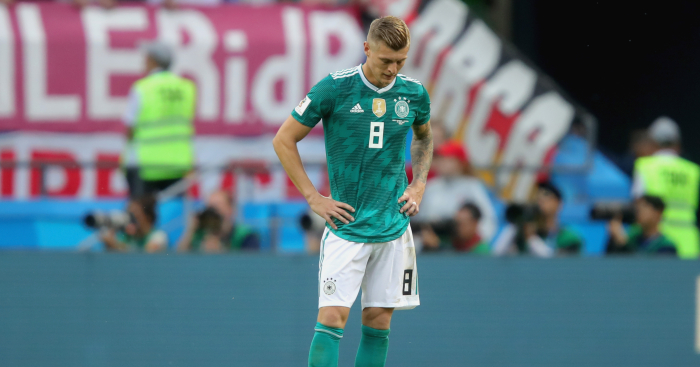 The World Cup brings all the best footballers from around the world together, including some top midfielders from the likes of Chelsea, Liverpool and Barcelona.

The middle of the park is often where you can find the most creative players on the park, who also have the added role of being a stopper in front of a defensive line.

We’ve taken a look at the stats to compare some of the top deep-lying playmakers in the competition, looking at Luka Modric, Toni Kroos, Sergio Busquets, Paulinho, N’Golo Kante and of course, England’s own midfield chief, Jordan Henderson.

Modric has netted twice in his two-and-a-half matches at the World Cup so far, helping Croatia to the top of a group which included Lionel Messi’s Argentina.

Real Madrid team-mate Kroos scored once in Germany’s limp campaign, which looked fired up after the midfielder’s fantastic late winner against Sweden.

Paulinho is the only other scorer from the six midfielders compared, latching onto a great through ball from Philippe Coutinho to open the scoring in the vital Group E match against Serbia.

Incredibly, between the six of them, none have managed an assist so far in the competition, meaning Kante, Busquets and Henderson are all yet to be directly involved in a goal.

Spain midfielder Busquets perhaps unsurprisingly has the highest passing accuracy of the bunch, completing 93.4% of his passes, just higher than Kroos’ 93.1% from his three appearances in Russia.

France are expected to progress further in the World Cup, and their No.13 Kante averages 64.6 attempted passes per 90 minutes, while Modric plays 58.4 and Paulinho just 38.5.

Widely regarded as the only German to leave Russia with his head held high is Kroos, and of the six midfielders he created the most chances for team-mates, playing 2 key passes per 90 minutes.

Modric sits just behind him with an average of 1.8, while Paulinho sets up a team-mate for a shot 1.3 times per 90 minutes.

Busquets has played three key passes so far this World Cup – 1 per 90 minutes – while Kante has mustered just the one, or 0.3 per 90. Henderson, meanwhile, is yet to register a key pass at the World Cup – though he has played just twice.

A new graphic showing the value (& cost) of #LFC Jordan Henderson's passing in non-shot #xG in the #ENG vs #TUN game. Only one misplaced pass that actively put #TUN on the front foot & that was a headed one. The glue in #ENG middle. Data @InfoGolApp pic.twitter.com/eGf1yXCDTP

The role of the midfield pivot has become much more rounded in recent times, and with the likes of England opting to play with just one holding midfielder, defensive prowess is just as important as passing and creativity.

As you may expect, Kante comes out on top when it comes to tackles, though both he and Kroos have made 2.7 successful tackles per 90 minutes at the World Cup so far.

Henderson is next best, making 2 tackles per 90, while Modric and Paulinho have both averaged 1.8. Surprisingly, Busquets is bottom of the pile having made three tackles in three games – 1 per 90 minutes.

Despite coming out well in all other stats, Kroos – and the rest of the German team – struggled to press, and he managed just 0.3 interceptions per 90 minutes in his World Cup.

Paulinho is only slightly better off with 0.4, while Henderson creeps above him on 0.5.

Barcelona’s Busquets has managed 1 interception per 90 minutes, and Modric is much better off with 1.8.

It will come as no surprise, though, that the tenacious Kante has averaged a huge 3.3 interceptions per 90 minutes at the World Cup so far.