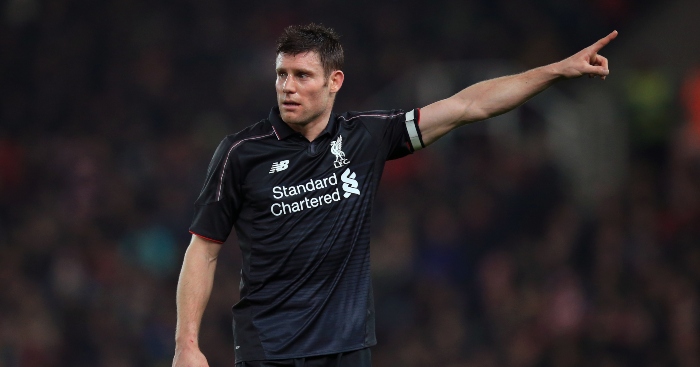 When James Milner signed for Liverpool in 2015, few would have predicted what they were going to achieve over the next five years.

The Reds won the Champions League in 2019 and before securing their first league title in 30 years in 2020.

We’ve looked back at the Liverpool team from his debut – a 1-0 win at Stoke City in 2015 – and compared it their current side to see just how far they’ve come.

In 2015-16, Mignolet was the undisputed No.1 at Liverpool, but he was dropped in favour of Loris Karius the following season.

The then world-record signing of Alisson from Roma in an initial £56million deal saw the Belgiu international well and truly usurped in 2018.

Alisson has been hugely important to the Reds’ recent growth under Jurgen Klopp, helping transform their rearguard into one of the best in Europe.

Clyne was also making his Liverpool debut against Stoke and quickly cemented himself as the club’s first-choice right-back.

But the England international started to be hampered by injury problems, which opened the door to Alexander-Arnold.

The 21-year-old grabbed his chance to get into the starting XI with both hands and has held on ever since, becoming one of the best right-backs in the world.

Liverpool had a leaky defence in 2016-16, with Lovren in particular guilty of some high-profile mistakes.

He remained a regular for a while thereafter, but Klopp made a significant move to fix his backline with the club-record signing of Virgil van Dijk from Southampton in January 2018, and Lovren has gradually become marginalised.

Since arriving at Anfield, Van Dijk has built a reputation as the best centre-back in the world and won the PFA Player of the Year award in 2018-19.

Skrtel was a loyal servant to Liverpool, making over 300 appearances for the club, but he was slowly eased out of the side with 2015-16 proving to be his final season at Anfield.

Gomez, meanwhile, is at the other end of the spectrum and looks set to partner Van Dijk for the foreseeable future, with Joel Matip an able deputy.

READ: Comparing Liverpool’s record with and without Joe Gomez at CB since 2018-19

Gomez, James Milner and Alberto Moreno shared left-back duties in 2015-16 in what was at the time a problem position for the Reds.

In 2017, Liverpool eventually arrived at the unheralded signing of Robertson, who had just been relegated with Hull City.

After a slow start to his Liverpool career, the Scotland international has developed into arguably the best left-back in the world, completing a quite remarkable back five.

Milner made his Liverpool debut in midfield but has been willing to plug virtually any gap in the Liverpool side over the last five years.

At 34, the England international is no longer a guaranteed starter, but he never lets the side down whenever called upon.

Liverpool decided to sign an out-and-out holding midfielder in Fabinho in 2018 and the 26-year-old has become instrumental to this Reds side, breaking down the majority of opposition attacks before they even reach that formidable backline.

Despite inheriting the armband from Steven Gerrard in 2015, Henderson continued to divide opinion among supporters.

But perceptions of the midfielder have changed dramatically over the last five years, and he will go down in folklore as a European Cup-winning captain with the Reds, and now a Premier League-winning one too.

Coutinho’s stunning long-range strike gave Liverpool a 1-0 victory against Stoke, and the midfielder was undoubtedly their best player in 2015-16.

The Brazil international continued to go from strength to strength under Klopp before completing his dream move to Barcelona in January 2018 in a deal worth £142million.

Wijnaldum may not provide regular provide moments of magic like Coutinho, but he has established himself as a key member of a team which is greater than the sum of its parts despite every part being pretty much perfect.

If anything encapsulates Liverpool’s transformation over the last five years, it’s this.

Ibe was expected to follow in the footsteps of Raheem Sterling, but the winger scored just four goals for the club and is now struggling for game-time at Bournemouth.

Salah has had no such problems in front of goal, scoring 94 goals in 152 appearances in all competitions since joining Liverpool in 2017.

READ: How Salah’s record after 100 PL games for LFC compares to other PL greats

It seems strange to think that Benteke was once keeping Firmino out of the Liverpool starting Xl.

The Belgium international was a £32.5million signing from Aston Villa, but the writing was on the wall for the striker once Klopp took over from Brendan Rodgers.

Firmino, on the other hand, has become the perfect embodiment of Klopp’s football, with his defensive work-rate matching his attacking brilliance.

Lallana was fundamental to the start of the Anfield revival under Klopp, only for a string of fitness injuries to force him down the pecking order, and he joined Brighton in 2020.

Since joining Liverpool in 2016, Mane has developed into one of the best wingers in the world, helping form one of the most devastating front threes in Europe.