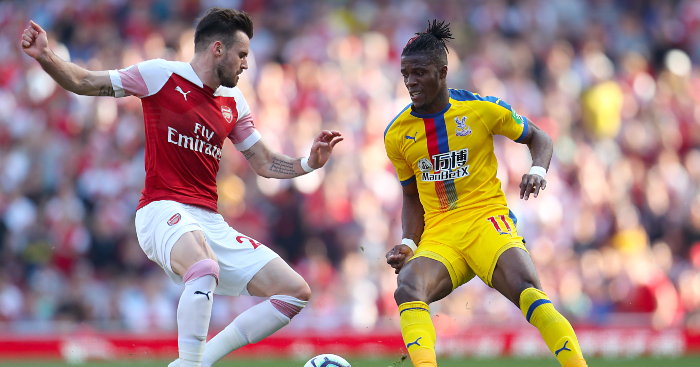 Wilfried Zaha reportedly wants to leave Crystal Palace for Arsenal – but doubts remain over whether the Gunners can afford to sign the winger.

Since returning to Palace from a difficult spell at Manchester United, Zaha has established himself as one of the Premier League’s best players outside a top six.

With a move to Arsenal being mooted, we’ve taken a look at how the Ivory Coast international’s stats from the 2018-19 Premier League season compare to Unai Emery’s current options from attacking midfield: Alex Iwobi, Henrikh Mkhitaryan and Mesut Ozil.

Zaha hit a career-best 10 Premier League goals for Palace in 2018-19 as well as providing five assists. As a result, he ended the campaign with a record of a goal or assist every 202.7 minutes of Premier League football.

None of Arsenal’s trio scored as many goals, while only Iwobi provided more assists (six).

In terms of minutes per goal or assist, only Mkhitaryan’s record of six goals and four assists, at an average of one every 164.6 minutes, betters Zaha’s rate.

Iwobi is not too far behind Zaha, contributing three goals and six assists at an average of one every 219.6 minutes.

Ozil, meanwhile, sits bottom of the pile. The Germany international scored five goals but provided just two assists, ending the season with an average of a goal or assist every 248.9 minutes.

Wilfried Zaha on the team he supported as a kid: “Arsenal – still do.” #afc pic.twitter.com/aqFcvt2hCX

Assist figures can be somewhat misleading, given a player can create a chance only to see it squandered by a team-mate. You can live stream football today, of course, and that, perhaps, is the only way to truly appreciate Zaha’s abilities.

Indeed, the much-criticised Ozil – despite registering the fewest assists – actually creates the most chances per 90 minutes with 2.3.

Iwobi is second on 1.8, while Zaha and Mkhitaryan follow closely behind, both on 1.6.

Zaha’s best attribute is his directness on the ball and ability to beat a player. As a result, it comes as no surprise to discover he completes the most dribbles per 90 minutes with 3.4, although he also attempts considerably more, meaning his completion rate stands at 50.7%.

Mkhitaryan and Ozil both complete 1.1 dribbles per 90 minutes, albeit Mkhitaryan posts the worst completion rate (39.3%) and Ozil the best (64.7%).

Emery is known for wanting his forwards to also contribute in the defensive phase of the game, as many of his former players have attested.

While Zaha completes the second fewest tackles per 90 minutes (1.2), he actually does so with the best success rate (66.6%).

Ozil’s struggle to win over Emery is perhaps explained by the fact he completes just 0.6 tackles per 90 minutes at a success rate of 40%.

It is a similar story in terms of interceptions, with Zaha averaging the second fewest with 0.3 per 90 minutes. Again, Ozil records the fewest (0.2), while Iwobi (0.5) and in particular Mkhitaryan (0.9) impress in this regard.