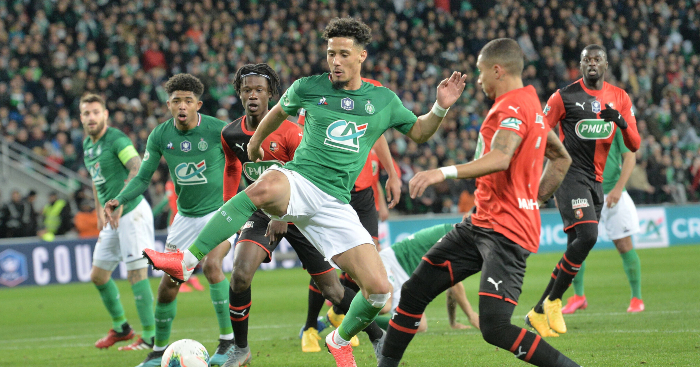 William Saliba’s loan at Saint-Etienne has come to an acrimonious end, with the defender set to miss the French Cup final and return to Arsenal after the two clubs failed to agree to an extension to his temporary deal.

Centre-back has been a problem position for Arsenal this season, and we’ve compared Saliba’s 2019-20 Ligue 1 stats to the corresponding Premier League figures of Shkodran Mustafi, Sokratis, David Luiz and Calum Chambers.

Pablo Mari and Rob Holding have been excluded due to a lack of game-time, having succumbed to Arsenal’s injury curse.

As we so often point out in these articles, when analysing a defender’s stats, it’s important not to focus too much on the quantity of their numbers and instead try to find signs of the quality of the figures.

So rather than concentrate on the number of tackles the centre-backs make per 90 minutes, their tackle success rate is perhaps more illuminating.

Saliba, in this regard, ranks highly. His tackle success rate of 77.3% is bettered only by Chambers’ 84%. Mustafi and Luiz have identical records, averaging 1.0 successful tackles per 90 minutes at a success rate of 76.9%, while Sokratis records the lowest figure at 68.4%.

Saliba’s numbers for interceptions reflect well on his ability to read the game, averaging 1.9 per 90 minutes in Ligue 1 this season. That is higher than all Arsenal’s current options, with Mustafi (1.4) the next best followed by Chambers (1.3), Luiz (1.1) and Sokratis (0.9).

Arsenal’s centre-backs have been criticised for making rash decisions and a lack of discipline, and it’s interesting to note Saliba makes far fewer fouls per 90 minutes, averaging just 0.2. Mustafi and Luiz record the lowest numbers for Arsenal with 0.9, followed by Sokratis (1.0) and Chambers (1.5).

Arteta played it down yday but within #AFC the expectations for William Saliba are very high. As reported by @TeleFootball this weekend, one of the reasons David Luiz was given a new contract was because the club believes his experience & leadership will help Saliba's adaptation

Playing under Mikel Arteta requires Arsenal’s defenders to be comfortable on the ball, something which hasn’t always been too smooth in recent years.

While scoring or creating goals is not what Saliba has been signed for, he is still the only member of the quintet without a goal or assist.

Luiz leads the way with two goals and one assist, Sokratis has scored twice, Chambers has one goal and one assist and Mustafi has a solitary assist.