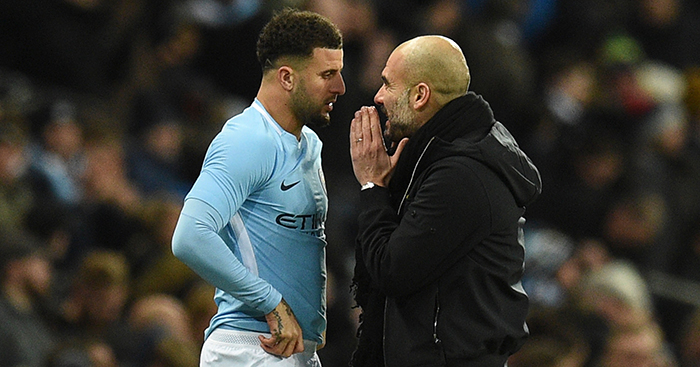 Plenty of eyebrows were raised when Manchester City spent £130million on three new full-backs in the summer, but six months later the expense is starting to look justified. They complete this City team.

The two most expensive recruits, Kyle Walker and Benjamin Mendy, both cost more than £50million, while Danilo arrived from Real Madrid for just under half of that to complete the hat-trick and confuse those who still view full-back an unglamorous position

Unfortunately for both club and player, Mendy’s promising start to life in Manchester was cut short by a cruciate ligament injury that’s kept him out for over 40 games in all competitions.

He has started only three games alongside Walker in the Premier League so far, and the aggregate score of 16-0 in those matches paints an ominous picture for the rest of the league when the French left-back does return.

Walker is enjoying a brilliant season. Previously accused of being somewhat of a liability defensively, that certainly hasn’t been the case at City, where his pace has helped get him out of trouble on the very few occasions he’s been caught napping.

Of course, with City having so much of the ball, it’s his attacking play that is more likely to shine anyway. He’s supplied five assists so far in the Premier League, the most of any defender bar Cesar Azpilicueta with six.

His constant overlaps and cutbacks have proved a nuisance to most defences, with his assist against Stoke in a 7-2 thrashing back in October being a prime example. 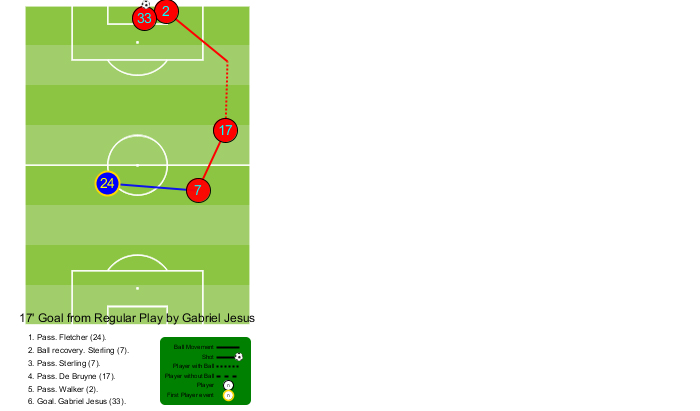 Danilo, meanwhile, has been unspectacular but a solid back-up option in both full-back positions and on rare occasions central midfield. He’s tended to be used more in the cup competitions, to give Walker a rest. He provides similar attributes but has not been as effective as the Englishman.

Manchester City’s full-backs last year, of course, were completely different: Bacary Sagna and Pablo Zabaleta rotated the right-back spot, with Gael Clichy playing back up to Alexsandar Kolarov on the left. All excellent players with distinguished careers, but on the wrong side of 30.

Pep Guardiola highlighted this as an area of weakness, and the City bosses delivered for him, with the average age being lowered considerably in the process. It may have cost a lot, but they should be set in these areas of the pitch for the foreseeable future.

How City are improved

All of City’s full-backs, including Fabian Delph who’s been used primarily as a left-back in Mendy’s absence, are blessed with stamina and pace. It’s crucial in a Guardiola team.

The Catalan likes his teams to play short passes in general – no more than three, four or five meters at a time. Having full-backs who can maraud up and down a touchline allows more space for the midfielders such as Kevin De Bruyne and David Silva to operate. This in turn means they can play these short-passes between them and the rest of the team much easier.

City utilise a 4-3-3 formation, with their two wide forwards, usually Leroy Sane and Raheem Sterling, pushing right up on the opponents full-backs.

On top of this, Walker/Danilo and Mendy/Delph support and overlap them when the ball is on their side of the pitch, creating an overload in the opposition full-back area.

Those four have already created 36 chances for team-mates and assisted eight goals this season in the Premier League. The four they replaced only managed three assists over the entire 2016-17 campaign. A stark increase, but the impact on the rest of the team is what will please Guardiola the most. 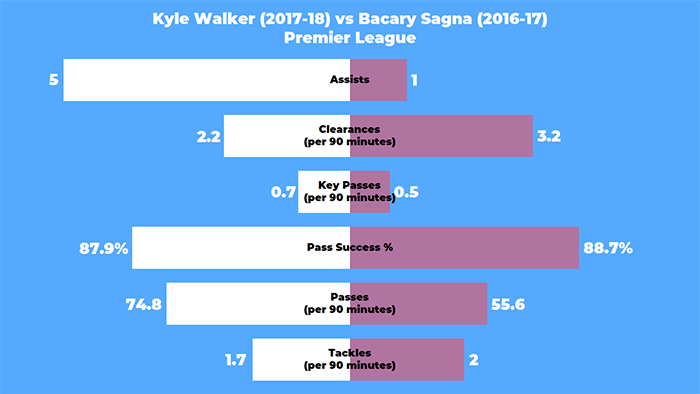 Looking at the stats it’s clear how much and in what sense City’s full-backs have improved the team this season.

Firstly, comparing the right-back position, Walker is offering a lot more in an offensive sense than Bacary Sagna was last season. He’s got more assists, averages a higher number of key passes per 90 minutes and makes nearly 20 more passes a game, with only a slightly less pass success rate.

Sagna does edge a couple of the defensive attributes (clearances and tackles), but with City defending less this campaign in general, this is perhaps to be expected. 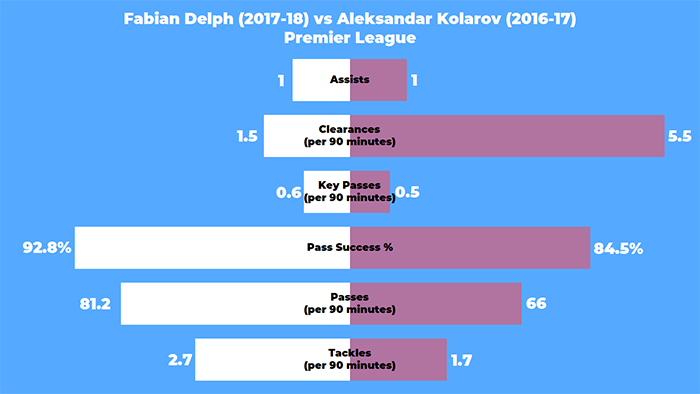 Looking at the left-back position and it tells a similar story. With Mendy out, Delph has performed admirably, recording a 92.8% passing accuracy and averaging over 80 passes a game. He’s also made more key passes and tackles than his predecessor Kolarov.

Manchester City’s improvement in this full-back area has been a significant part of their success so far this season and another piece of an already impressive looking jigsaw.

Regardless of how much money it took, Guardiola identified an area of weakness and sufficiently fixed it. The rest of the Premier League and Europe should be worried.