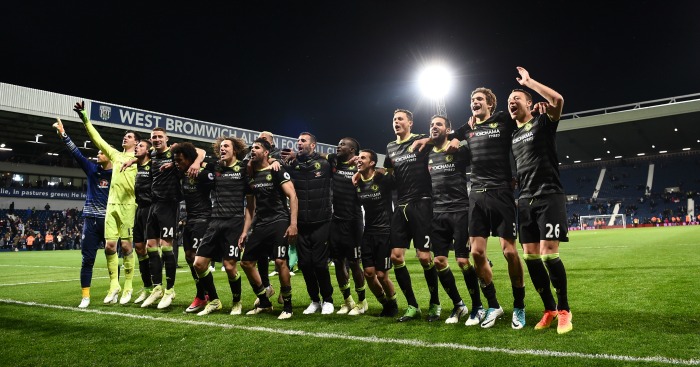 Chelsea crowned a magnificent season on Friday night by clinching the Premier League title – and they are now on course for a record-breaking campaign.

Michy Batshuayi’s late goal fired Chelsea to victory at West Brom and ended Tottenham’s hopes of catching the Blues at the top of the table.

The success, masterminded by Antonio Conte, marks the Londoners’ sixth league title and is just reward for their imperious form for the majority of the season.

Anyone who says Chelsea didn’t deserve to win this season… pic.twitter.com/hwr1XbNtoG

– If Chelsea win their remaining two games of the season, they’ll set a new record for Premier League victories in a campaign (30).

– Chelsea have won 42 points away from home in the Premier League this season (the most) and have the highest tally of away points by a side in a PL season since Manchester United won 42 in 2011-12.

– Cesc Fabregas has provided 10 or more assists in six different Premier League campaigns, more than any other player (Ryan Giggs and Wayne Rooney with five).

– Including up until the end of the season, Chelsea would’ve been top of the Premier League for 184 days, the fewest total days they’ve spent on top in a title-winning season in the PL.

– However, Chelsea haven’t spent a single night off top spot in the Premier League since December 11 (they briefly dropped to second on December 10).