7 times Ronaldo has sulked after being criticised: Morgan, Ten Hag… 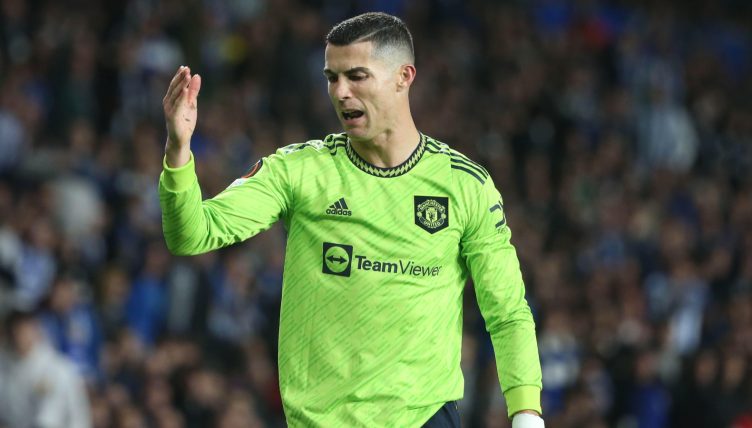 Cristiano Ronaldo is one of the greatest players of all time and is a legend of the game, but he can also be a massive crybaby.

Criticism can be aimed at anyone, no matter how good you are or how much you’ve accomplished, and responding to this criticism is a good way of seeing the mindset of players.

Some respond with silence and let their performances do the talking. Others speak out, but then deliver on the pitch, while some throw a massive strop.

Ronaldo has both responded on the pitch and thrown a tantrum in his long and glittering career, and we’ve picked out the best incidents where he had a moan after being criticised.

Where to begin with this?

After being marginalised by Erik ten Hag, and seeing United enjoy success in his absence, Ronaldo defected all over his legacy with an explosive interview with renowned shitehawk Morgan.

Amongst calling Wayne Rooney fat, boasting that Gary Neville would never be welcome for dinner and attempting to get the fans back onside with some Glazer criticism, Ronaldo bemoaned his treatment under the new United boss.

When asked if United’s hierarchy were trying to force him out of the club, Ronaldo said: “Yes. Not only the coach, but the other two or three guys around the club. I felt betrayed.

Ten Hag had attempted to be diplomatic around the issue of Cristiano Ronaldo, treading carefully around the awkward fact that the club’s top-earner and most high-profile player isn’t an obvious fit for the high-intensity type of football he’s attempting to instil at Old Trafford.

Ronaldo tried to find an exit route in the summer but ended up staying put.

The 37-year-old set the tone for a frosty relationship by leaving early in United’s pre-season friendly match at home to Rayo Vallecano.

“It’s unacceptable, for everybody. I tell them. That it is unacceptable and that we are a team, so a selection. That you have to stay until the end,” Ten Hag responded.

The Dutch coach has since used the 37-year-old veteran intermittently but left him out for some of United’s biggest games. Ronaldo was dropped against Liverpool and was unused as a substitute in the 6-3 defeat to Manchester City.

“Marcus [Rashford] was ill at the weekend, he was not available for 90 minutes,” Ten Hag told MUTV of his decision to choose Rashford ahead of Ronaldo against Tottenham.

“Otherwise, he would have started on Sunday. You saw at the moment Marcus came in, we were getting more dynamic in front. That’s what we need today, to break the lines, but also to build up this game and in the end, we know we have a threat from the bench with Cristiano [Ronaldo] to finish the game.”

That wasn’t direct criticism of Ronaldo, but you can’t imagine he was happy. We received confirmation of how he felt in the closing stages when Ronaldo got up off the bench and walked down the touchline and into the dressing room. According to The Athletic, he left the stadium and didn’t hang about to celebrate his team-mates’ 2-0 victory over Tottenham.

"I will deal with that tomorrow"

Erik ten Hag gives his reaction to Cristiano Ronaldo walking down the tunnel before the end of #MUNTOT…#PLonPrime pic.twitter.com/A0QQwxcBLj

Rooney and Ronaldo enjoyed a brilliant partnership at Manchester United, helping the club win three Premier League titles and the Champions during their five years together.

Despite their friendship, Rooney didn’t defend his former team-mate when asked if Ronaldo had made the desired impact at United in 2021-22.

“You’d have to say no, at the minute,” Rooney told Sky Sports in April 2022. “He’s scored important goals early on in the season in the Champions League and he’s scored the hat-trick against Tottenham.

“But I think if you’re looking towards the future of the club, you have to go with younger, hungry players to lift United over the next two or three years.

“Cristiano is getting on a bit and he’s certainly not the player he was when he was in his 20s and that happens. He’s a goal threat but I think during the rest of the game, they need more.”

After his appearance on Monday Night Football, Rooney then posted a photo on Instagram. Ronaldo then took the opportunity to hit back at the criticism as he commented on the post, writing: ‘Two Jealous.’

Rooney, who is younger than Ronaldo, decided to hang up his boots in January 2021 and is currently the manager at DC United.

Cristiano Ronaldo’s comment on Wayne Rooney’s Instagram after the latter suggested Manchester United should move on from Ronaldo pic.twitter.com/m7OmmDJoDA

Cassano, who played for the likes of Real Madrid, Inter and AC Milan, has been an outspoken critic of Ronaldo over the years.

After he claimed that the Portugal international is not one of the five greatest players in history, Ronaldo reportedly decided to contact him.

“Cristiano wrote to me on WhatsApp asking for more respect after everything he’s won, all the goals he’s scored and for what he represents,” Cassano said on Christian Vieri’s Twitch channel.

“I’m not afraid to tell the truth, I’ll face the whole world, from the Pope to the last person on earth. I told Cristiano Ronaldo that it’s not disrespect to say that only one Ronaldo exists and it’s the Fenomeno and that [Lionel] Messi is much better than him. That’s not disrespect.

“I was telling the truth, facts, that Messi is much better than him and there’s only one Ronaldo. I called Gigi Buffon and asked him if he had given my number to someone. He confirmed that he gave my number to the press officer [at Juventus] and he gave it to Cristiano. He sent me messages saying: ‘I have a lot of money, I’ve scored more than 750 goals – you’ve only scored 150 in your entire career.’ I said what I think and it’s just a personal opinion.

“I thought about why a person does something like that. Cristiano Ronaldo has everything, he should live serene, calm and relaxed instead of listening to what people say about him. He should follow Lionel Messi’s example – he’s a person who doesn’t give a damn what the world thinks.”

Back in March 2020, football website Transfermarkt published a ‘Jorges Mendes XI’ made out of players represented by the Portuguese agent.

Despite being named as the striker for the XI, Ronaldo wasn’t happy after finding out that they only value him at €75million and blocked Transfermarkt on Instagram.

“They answered him, explained why, and told him ‘The people in your own age group, you are by far the number one.’ I think it was £30-50 million difference (between Ronaldo and the next player on the list), and then he sent some smilies, and then he blocked us.”

Ronaldo’s sporting rivalry with Lionel Messi is arguably the most iconic competition between two elite players that football has ever seen.

But Messi comes out on top when it comes to the Ballon d’Or, winning seven in comparison to Ronaldo’s five.

“Ronaldo has only one ambition and that is to retire with more Ballon d’Or [awards] than Messi,” France Football editor Pascal Ferre told the New York Times in 2021. “I know because he has told me.”

Ronaldo then used his Instagram page to launch a response, stating that “Pascal Ferre lied and used my name to promote himself and to promote the publication that he works for.

“It’s unacceptable for the person responsible for handing out such a prestigious award to lie in this way and to show disrespect to someone who has always respected France Football and the Ballon d’Or.

“My biggest ambition in my career is to have my name written in gold in world football history.”

Not bitter at all…

Ronaldo was arguably at his peak in 2012, yet he found himself at the centre of criticism from Real Madrid fans who accused him of being too selfish on the pitch.

In a 5-1 win over Granada at the Santiago Bernabeu, Ronaldo responded to this fan pressure with a sulk, scoring the fifth goal, but refusing to celebrate with the fans, instead choosing to bow his head and returning to the pitch.

A player who has an iconic celebration refusing to celebrate shows that something was wrong indeed, and the Spanish media were quick to pick up on it.

Marca in Madrid wrote after the game that “since the game against Barca (a 3-1 loss), a significant section of the stadium has been complaining about Ronaldo’s performances and he doesn’t like it.”

“If Cristiano doesn’t like the way the fans are expressing themselves, the worst thing he can do is show it in the celebration of a goal.”

And that’s exactly what he did, with a notable lack of a “siu” after his goal. It all worked out in the end though…