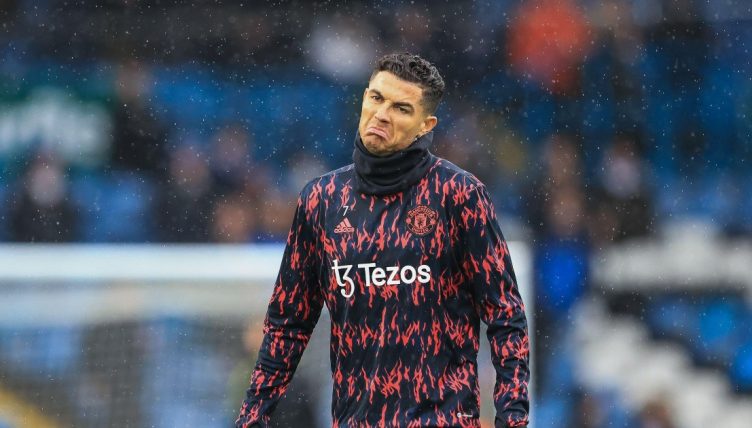 Manchester United’s Cristiano Ronaldo is one of the greatest footballers of all time, and one of the major reasons for that is his remarkable ability to adapt to playing multiple positions.

So we decided to see just how versatile he is by putting a team of Cristiano Ronaldos in the Premier League in Football Manager 22 to see what FM thinks would happen over the course of a season.

Picture it: Ronaldo has disappeared from the public eye and cancelled his contract with Manchester United. All that’s known is that he’s gone to a custom-made, industrial-looking building he built in Madeira and hasn’t been seen for months.

Suddenly he calls a press conference, and all the biggest football journalists in the world (including us, obviously) have been invited to the unveiling of whatever it is Ronaldo has been working on.

And then, walking out of the industrial building off in the distance, you see them; dozens upon dozens of Ronaldo’s walking out into the world. Each one is a perfect clone of the man himself, wearing Ronaldo-branded pants and holding a tub of hair gel.

Ronaldo announces he has successfully done the impossible, and cloned himself. He has purchased Norwich City, Delia Smith apparently made him a nice casserole to say thank you, and renamed the club “Cristiano Ronaldo FC,”

All the players have been sacked, with their places taken by Ronaldo clones. Even the goalkeeper and manager are Cristiano Ronaldos, and the man himself won’t rest until he proves that he (they?) really is (are?) the greatest player(s) of all time.

There’s a buzz around Carrow Road, now renamed ‘The Suiiii Arena’, as the build-up to the Ronaldos’ first match in the Premier League draws closer.

Norwich has turned into somewhat of a city-state, Ronaldo purchasing virtually all of the land in the area as part of his plans for footballing world domination. His face is in every shop window, his name on every brand and his fitness regime is required reading. 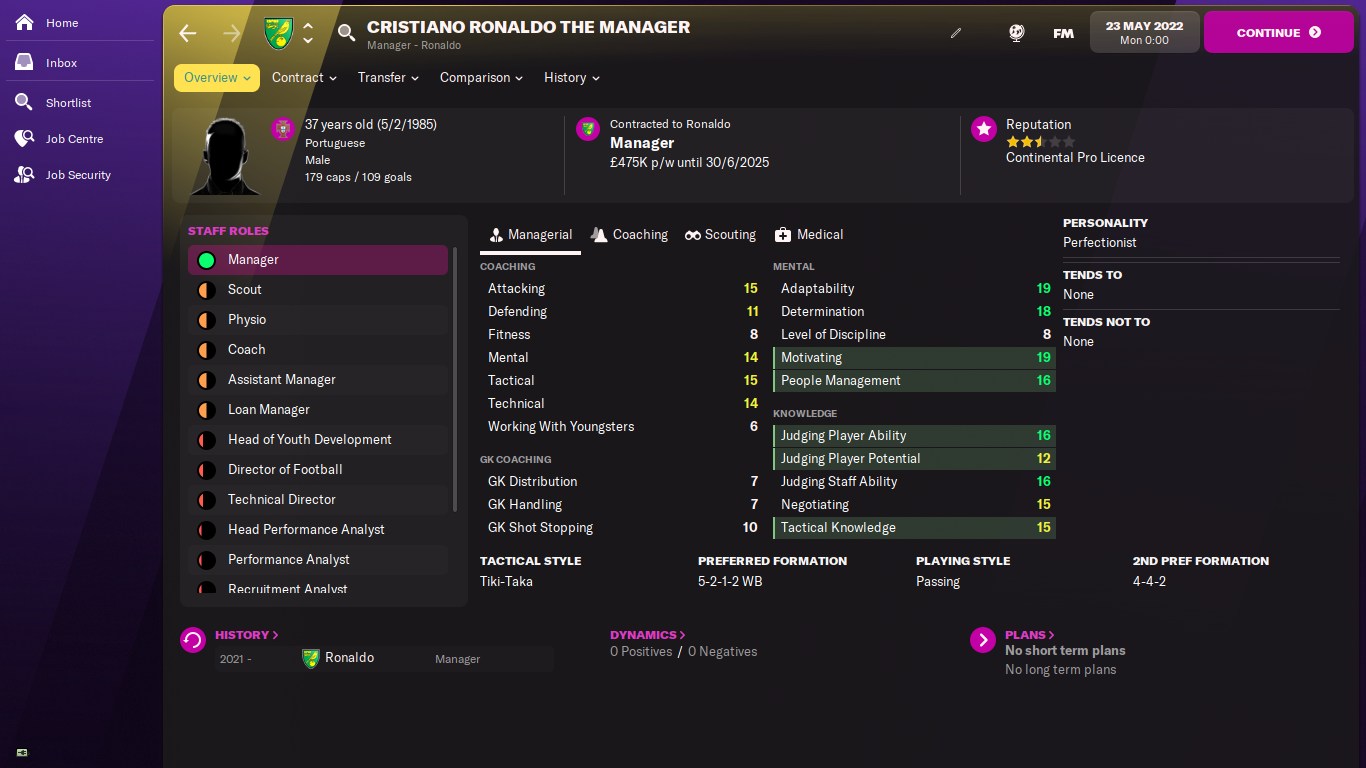 Some guy wearing a Lionel Messi shirt breaks free from the stewards and runs onto the pitch, but before he can make it two yards he’s wrestled to the ground by two members of the new ‘Ronaldo Police’ the Portuguese striker has set up.

Like wearing Messi shirts, ironic ‘Sui-ing’ is one of the crimes being cracked down on most in Norwich, soon to be renamed ‘Ronaldoville’ by an act of parliament that’s being hurried through the houses by the new MP for Norwich; another Ronaldo clone.

Out come the teams, and the perfect eleven copies of Ronaldo along with the man himself show no mercy to the Saints, defeating them 2-1. There is only one deity in East Anglia now, and his name is Ronaldo.

For some reason, Cristiano Ronaldo The Manager seems to like a bold 5-2-1-2, like the one here he sent out against Reading in the third round of the FA Cup, with a Tiki-Taka style (FM generates a different tactical preference for each real-life player randomly every time you start a new game). 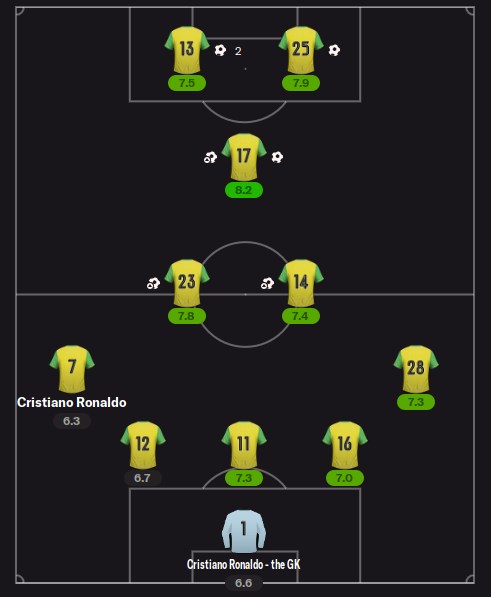 But what’s arguably more confusing than that is the fact that the REAL Ronaldo played… left-back? Perhaps that’s where he’s always wanted to play and no manager ever let him.

There were a number of impressive victories for the Ronaldos. Leicester were beaten 2-1 away from home, Brentford received a 4-0 hammering and West Ham were outscored in a 4-3 thriller.

In fact this all-Ronaldo side was so good they even reached the FA Cup semi-final, only to lose out to eventual winners Aston Villa.

All the questions of whether what Ronaldo had done was even legal or ethical flew out the window as his side produced results and climbed up the table. Delia Smith even came on the pitch at half-time for the match- “Let’s be having suiiiiii” she cried.

The crowds were made up of Ronaldo fans, the odd local and a couple of Manchester United fans who thought they were at a Glazers Out protest.

With a full stadium every week, people came from all over the globe to see their GOAT(s) and a new ‘Cristiano Ronaldo Norwich International Airport’ was built to welcome pilgrims into the city.

So, where did Ronaldo’s team of Ronaldos, managed by Ronaldo and starring Ronaldo finish in the league? 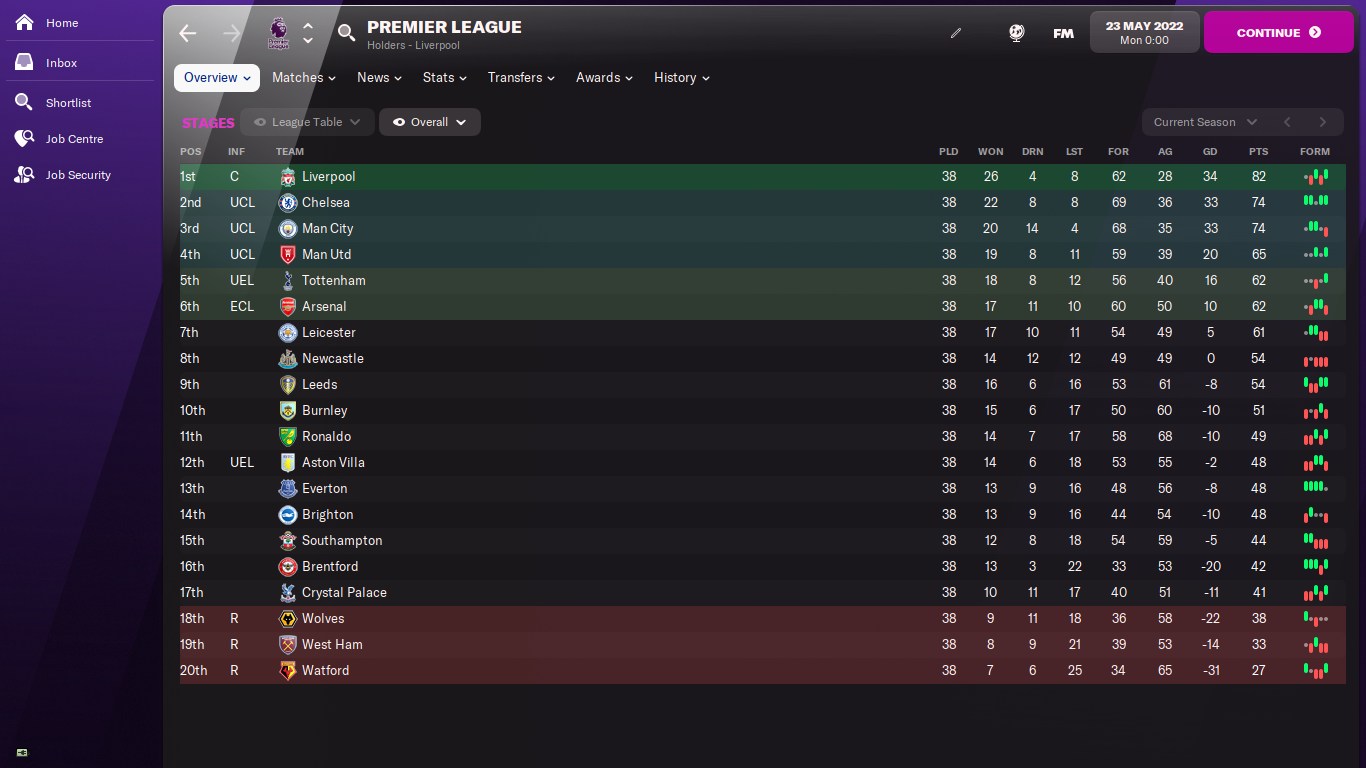 They scored 58 goals, outscoring all but five teams… but conceded a huge 68, more than anyone else.

To me and you that’s impressive. A team full of eleven of us wouldn’t even register a goal, plus there’s the fact the former football club Norwich didn’t get relegated. But for Ronaldo? Unacceptable.

In fact, as his eyes gazed up the table, he got angrier and angrier… until he saw it: United, without him, finished fourth.

His eyes went red, and his hands trembled. Calls were made, one Ronaldo spoke to another Ronaldo, and suddenly all of them were lined up, setting out towards Manchester with fiery intent and suiing as they marched.