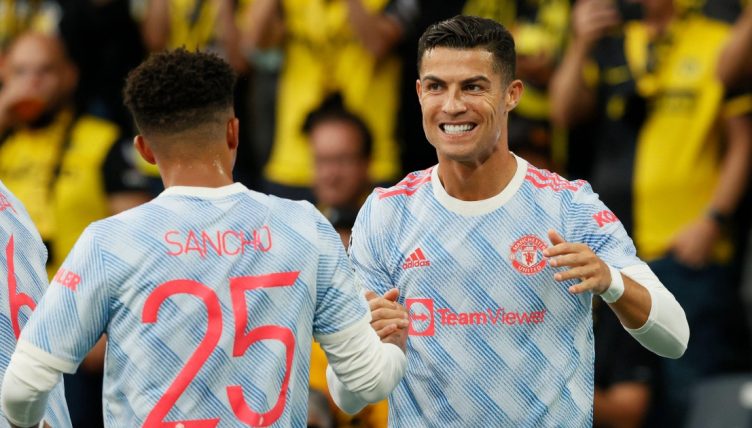 Cristiano Ronaldo has unsurprisingly continued to score goals during his second spell at Manchester United – but he’s also made a huge impression on his team-mates.

Media reports had suggested that Ronaldo’s return last summer created a division in the Old Trafford dressing room but the payers have denied this.

He earned instant respect from his peers, and we’ve rounded up some of the best quotes from his impressed team-mates.

– “You know the qualities but I think the experience of Cristiano is amazing,” De Gea said in September 2021. “It’s great for us, he’s a legend here at the club already. It’s great to have him back, it’s massive for us.”

– “He’s great,” De Gea told United’s official website in June 2022. “The way he works speaks for himself. The way he treats himself, his body. He is focused in every training session and every game.

“This is why he is one of the best in history. He’s mentally very strong and that’s an example for everyone [to follow].”

Reporter: "What are your thoughts on the arrival of Cristiano Ronaldo?"

– “I’m sure I speak not just for me but he’s [Ronaldo] been one of the most positive things about this season, to work with somebody who has his culture of working, professionalism, mentality, being close to him now, it’s been very helpful for me and my career,” he told Sky Sports.

“I don’t have any more compliments to give about the way he works, he’s a fantastic human being as well. The numbers are there, the stats are there, so we’re obviously very happy to have him here.

“He’s a very friendly person. When he feels he has the trust of other people, he gives 100 per cent of himself to you. Everybody gets along with him here, everyone likes to have him around. It’s always a big plus to have a player and a person like this in the changing room.”

– “I think the stats can speak for themselves,” Dalot told United’s official website. “He’s a machine, like I like to call him. Inside of the pitch, outside of the pitch, the way he works, the way he drives himself every single day to perform like this, to give us these goals and these performances.

“I think it’s a plus for this club and for the fans and, hopefully, we can stay with him for many, many years. I know he is not going to be here forever but I’m sure that he will play football for a few more years yet.”

– “Of course, we have brought in a world-class pillar that contributes a lot both on and off the field,” he told Fotbollskanalen. “I just think it’s been nice to have him there. He is a good person who helps a lot and tries to support the younger players.”

– “I mean it’s just unbelievable, and the way he keeps on scoring goals is unbelievable,” Lindelof said after Ronaldo scored a hat-trick in a 3-2 win over Norwich City.

“But, I mean, we’re seeing every day the work he puts in and the way he takes care of his body. His mentality is just unbelievable, so I’m not really sure what else to say.”

– “I think he is the best example in the world in terms of work ethic and winning mentality,” Varane told Sky Sports in September 2021.

“Playing with this type of player, you improve every day. If he is still playing to such a high level at his age, it’s because his work is amazing. I’m very happy to play with him.”

– “Keeping on [playing] at the same level at his age is not happening by chance,” he told Telefoot. “He is an example. It is great to be able to work, play and be with him. As we well know, he is made to win, to score goals, so it is better to have him with us.

“We know the aura he has. He is an incredible professional. It is better that he plays for us than against us.”

"Cristiano is a great competitor, he’s a legend" – Raphael Varane on Ronaldo & suggestions he hindered #MUFC last season rather than helped pic.twitter.com/KxhqJ2PKY9

“You know the star he is, what he has been doing over a number of years,” Shaw told BBC Radio 5 Live. “It is just unbelievable to be in a dressing room with him.

“You see the way he conducts himself, how professional he is. It’s clear to me why he has been at the top for so many years.

“His mentality is second to none. I think he has really improved that in and around the changing room.”

– You see day in, day out the way he is, the way he conducts himself. He wants to win,” Shaw said after United’s 2-2 draw with Atalanta.

“Before the game, he’s always speaking, encouraging everyone and you know he’s going to be there. You know he’s a very important player, he has been for many years now and he’s always in the right place at the right time.

“Not just tonight, he’s done it since he’s been here really. It’s incredible to have someone like that in your team when you need them most.”

“He is an amazing player, you know the difference when you look at Cristiano Ronaldo,” he said in September 2021. “With the ball, without the ball, he works a lot and it’s so good for us. We are so happy to have Cristiano here

“We know who Cristiano Ronaldo is because he likes to win, he pushes everyone, so you need to be at your best to get with him.”

“It’s very important for them to see how he behaves every day and how he approaches the games and the training sessions. He’s a winner.

“He’s a great character and a very nice man outside of the pitch. I’m very pleased I had the opportunity to share the dressing room with him.”

“Disregarding if he plays better or worse, if he scores or not, he always does the same thing before and after the game,” Mata told The Athletic. “So for him, the game is just the most important part of his day.

“That’s something I can look at. He’s like, ‘this is the right thing to do because that way you get into the game with more confidence in yourself. I’ve done everything I could to play good. I’m going to play good’. He’s a great example with how he prepares for games.”

He continued: “It has been a great experience to get to know him better, to train with him and to see also how he understands football. I have had many conversations with him about football.”

You can learn so many things from him. He’s one of the best players in the world. To have him back home is perfect for us at the moment.

“He’s really humble. He’s a positive person. To be learning different things off the field as well as on it has been really good.”

“I rub shoulders with the person who has worked the hardest in the world of football: Cristiano Ronaldo,” he told Onze Mundial. “I can only learn from him. Cristiano is at the very, very highest level. You can feel the experience he has.

“When it is necessary to score the winning goal, he will score it. He is always there when you need him. Live, it’s very impressive. Facing the goal, it’s incredible.

He continued: “He’s a great team-mate. If you need advice, he’ll be available, as you can ask advice from everyone at United.

“I’ve been watching him on TV since I was little, so I don’t really know how to talk to him! But being with him is special. I train with one of the greatest players in football history, so I learn all the time. I watch everything he does. I do just like him.

“When you see him on a daily basis, you realise that there is only that for him: work. He does whatever is good for his body.”

“It is great to play next to someone who people call the GOAT, so it is actually kind of crazy,” Sancho told BBC Sport. “When he first came into the dressing room I was kind of stunned; I couldn’t believe that I was going to be playing alongside him.

“To have him around is fantastic; he is a great player and is a great guy. He always wants to win and for the younger players he is always helping us learn new things, telling us what to do and how to do things to make things better.

“I really appreciate him for that and he is just a great guy overall.”

– “It’s really good [to have Ronaldo as a mentor] because I go to training quite early and see him there,” he told MUTV.

“If we have had a game the day before, we’ll speak about the game or training. He’s a really good person to have around the building, not just because of what he does on the pitch, but what he does off the pitch as well.

“If we [younger players] need any help we can speak to him, so he’s a really good person to be around.”

– “He knows what it takes to get to the top so it’s more than right to just speak to someone like that,” he told United Review. “And, yeah, we have a chat the day before or even during a game. You might see us in the warm-up.

“He’ll speak to me and Sancho together about what we can do in the game, to affect the games, and it’s important to have someone like that in the team.”

“Cristiano is a top professional, one of the best in the history of the game. We all love him,” Martial said. ‘There are things that are said in the media that are not true.

“I was in that dressing room and I know what happened.”