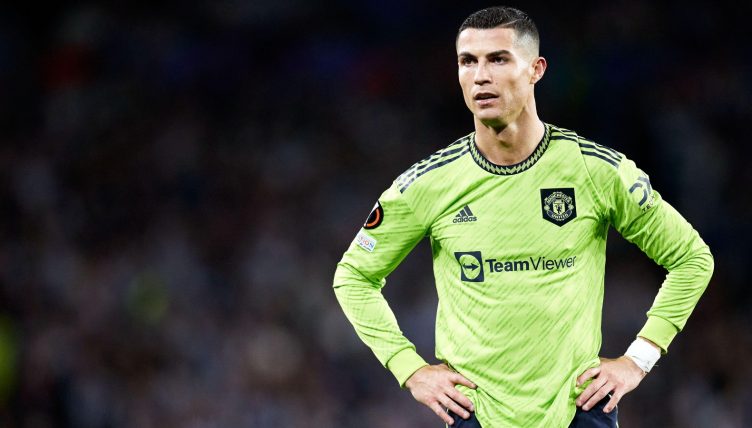 The 2022-23 season is proving to be the most difficult of Cristiano Ronaldo’s career.

The Manchester United superstar has scored over 700 club career goals, is the all-time leading goalscorer in the history of international football, has won the Ballon d’Or five times and the Champions League five times. But this season is not going to plan.

There have been plenty of off-field issues, with a stunted pre-season and summer of transfer rumours followed by a terse relationship with new boss Erik ten Hag.

The Dutch tactician has left Ronaldo out of the starting line-up in a number of high-profile games, with things boiling over as the 37-year-old refused to come off the bench and left the stadium early during a 2-0 victory over Tottenham in October.

Ronaldo was left out of the squad for the following game against Chelsea, but has since expressed regret and been welcomed back into the fold, and was even named captain in Sunday’s 3-1 defeat away to Aston Villa.

He’s got an ally in former team-mate Roy Keane, perhaps surprisingly given the ex-midfielder wasn’t exactly known for his leniency as club captain of United.

“I try to see it from a player’s point of view,” Keane told Sky Sports following his refusal to play against Spurs.

“He’s obviously had enough and he’s lost his head. I think it’s been brewing now for the last few weeks.

“But I will still try and defend him. He is a human being, he’s got flaws. He feels frustrated that he’s not been getting opportunities, he’s had enough and walked down the tunnel. I think players have done a lot worse things at Manchester United. It happens, it’s human nature.

“The guy cares. I’ve said it before that this game is full of bluffers and he’s certainly not one of them. I think he cares about the club he wants to play. He needs to play. He’s a world-class player and people are saying he’s not the same player he was 10 years ago. Of course he’s not. But he was leading goalscorer last year. He went into a really bad Man United team last year and he was still the leading goalscorer.”

Ronaldo scored a respectable 18 Premier League goals (24 in all competitions) in his first season back at Old Trafford, but United struggled and registered their lowest points tally of the Premier League era. Their sixth-place finish means that the Portuguese icon is playing in the Europa League for the first time in his career.

He’s no longer a guaranteed starter, but he has clocked up a reasonable number of appearances and minutes. Here are 10 sad stats that show time might finally be catching up with the all-time great – which come via WhoScored and FBref.

– Ronaldo has had 25 shots this season in the Premier League but scored just one goal in the competition. To put that in context, top scorer Erling Haaland averages a goal every 2.8 shots (18 from 51).

– Just six of those 25 shots have been on target. He’s committed more fouls (seven) than registered shots on target.

– Things aren’t a great deal better in the Europa League, where he’s scored two goals (one penalty) from 31 attempts.

– Despite registering lots of shots, Ronaldo has registered just 1.9xG (expected goals) this season in the Premier League this season. That suggests he’s frequently shooting from low-quality chances and struggling to get himself into dangerous positions to score. He registers just 0.33xG per 90 minutes, a rate over three times lower than Haaland (1.05xG per 90).

– Ronaldo ranks 651st of the players in Europe’s top five leagues in terms of his goals-per-shot ratio (0.04).

– With just 24% of his shots being on target, Ronaldo ranks 705th for players in Europe’s top five leagues in terms of his shooting accuracy.

– The 37-year-old is on course for his worst goalscoring campaign since all the way back in 2004-05, when he scored five Premier League goals and nine in all competitions for Manchester United.

– When you factor in assists, Ronaldo has five direct contributions to goal (three goals, two assists), which averages out every 262 minutes in all competitions. In 2014-15, he averaged a goal or assist every 56 minutes (61 goals and 21 assists in 54 games).