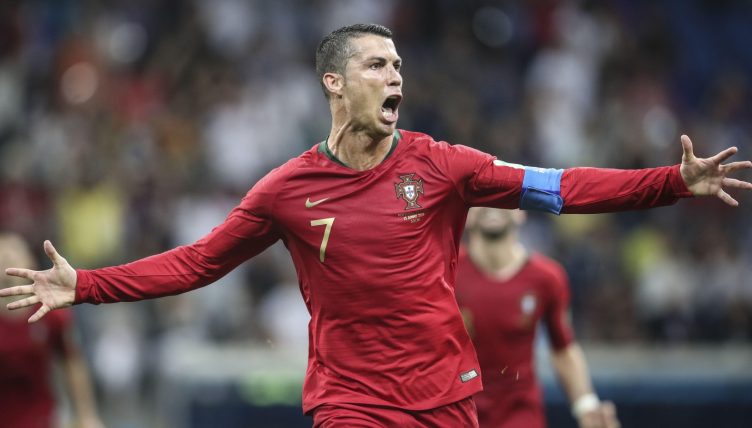 Cristiano Ronaldo begins his fifth World Cup looking to guide Portugal to their first success in the biggest sports event in the world – & he’ll be looking to add to his tally of seven World Cup goals.

Despite featuring in four iterations of the tournament, Ronaldo is yet to score a World Cup goal in the knockout rounds as Portugal have struggled to match their run to the semi-finals of Germany 2006.

But, despite leaving Manchester United on the eve of his Qatar 2022 bow, the 37-year-old will back himself to fill his boots against group opponents Ghana, Uruguay and South Korea.

We’ve ranked each of his seven World Cup goals from worst to best.

A bog-standard penalty in a yawn-and-scratch-arse win over Iran in 2006 opened Ronaldo’s World Cup account.

Ignore the dispatch and focus on the non-stuttering run-up and heavy breathing that suggests Ronaldo was attending an antenatal class rather than about to biff the ball into the goal.

A terrible shot that was helped into the net by David de Gea during a classic encounter with Spain at Russia 2018, Ronaldo still celebrated his good fortune with all the modesty we’ve come to expect from Piers Morgan’s best mate.

When did Ronnie’s Adam’s Apple get so big? It’s almost as big as his head here, Jesus.

Other than that, this is another professionally dispatched penalty against a Spain XI boasting Andres Iniesta, Sergio Ramos and shithouse royalty Diego Costa.

With this group stage match with Morocco just minutes old, Ronaldo launched himself at a corner and bulleted a header past a startled goalkeeper.

The neutrals inside Moscow’s Luzhniki Stadium had got what they’d come for; the great goalscorer notching up another victim for his bedpost and indulging in his traditional – and definitely not annoying – celebration.

4 years ago today, Cristiano Ronaldo scored the only goal of the game as Portugal beat Morocco 1-0 at the 2018 World Cup @Cristiano ⚽️🇵🇹pic.twitter.com/Or9jjkoiPK

Come for Ronaldo banging home his only goal of Brazil 2014, stay for Ghana making a three-course meal out of clearing a simple ball.

Ronaldo channelled his inner seal in 2010, balancing the ball on his neck as the hapless North Korean goalkeeper slid past him like a child on a water slide.

Resisting the temptation to burst out laughing, the greatest European player of his generation tapped the ball into an empty net for the sixth goal in this 7-0 demolition.

Like most countries, Portugal appear to have something against North Korea. They had a lovely time in 2010 as they whacked the Asian side 7-0 in the group stage. It took Ronaldo until the sixth goal to get involved, and what a bizarre little goal it was.pic.twitter.com/7hr4NeJnez

One of the great World Cup moments; everybody of a certain age remembers where they were as Ronaldo lined up this free-kick.

He never looked likely to miss.

Cristiano Ronaldo scores this beautiful free kick to complete his hattrick against Spain in the World Cup in 2018. What A Moment pic.twitter.com/Rfr2MY0npE