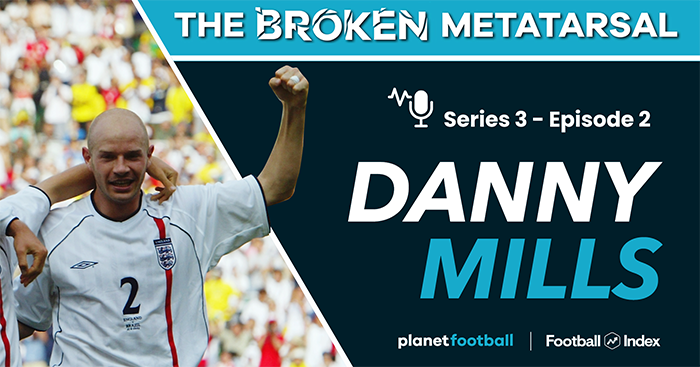 Danny Mills was a big part of some of our very favourite moments of the 2000s – and the former Leeds, Manchester City and England defender shared some wonderful stories about them on the latest edition of The Broken Metatarsal podcast.

Looking through our list of previous episodes, we’ve covered England’s Golden Generation, Leeds in the Champions League, Manchester City under Sven-Goran Eriksson, the Arsenal Invincibles, 2000s shithouses – and Mills was there to see it all.

And in easily one of our favourite episodes we’ve recorded, he was funny, honest and open about everything we asked as we fanboyed over a man who, let’s not forget, played in a Champions League semi-final and in all five of England’s games at the 2002 World Cup.

Though, as he candidly points out, he was helped by a certain injury ahead of that tournament – which made him the perfect guest for the second episode of series three of the podcast: “My England career wouldn’t be anywhere without a broken metatarsal and Gary Neville breaking his. I love broken metatarsals to be honest!”

Mills’ recollection of the Beckhams’ pre-World Cup party alone – he was positioned between the toilets and Steps’ table – could have made for a brilliant podcast, but there are plenty more highlights, including sharing the drugs testing room with Ronaldinho after THAT goal, being first on the scene after THAT Robert Pires penalty, winding up opposition wingers with Ben Thatcher and much, much more.