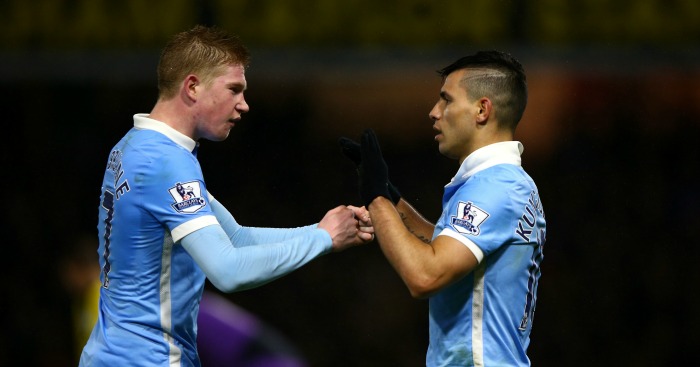 Manchester City and Tottenham have partnerships which are among the most effective in Europe’s top four leagues in terms of goals scored and assisted by the same two players.

No matter how good a striker is, they will never score the amount of goals they’d like without quality players behind them to create chances.

Some, like Lionel Messi, are more than capable of scoring goals out of nothing, of course, but even the great man has to rely on team-mates now and again. Thankfully for him, as this list proves, Barcelona’s forwards are just as adept at laying on chances as they are finishing them.

All statistics provided by Transfermarkt and relate to league matches only.

Featuring the only entries from the Premier League and the only entry which includes a defender in Sergio Ramos, all of Europe’s top four leagues are represented in the five-goal bracket.

RB Leipzig’s promising season sees a mention for two of their most sought-after talents, while Mauro Icardi proves how crucial he is to Inter Milan as both a creator and finisher.

Here it starts to become apparent just how fun it must be to be a member of Barcelona’s front three – you’ll hear more about them later.

Neither Mo Salah nor Edin Dzeko were the most popular figures in the Premier League, but both are thriving in Serie A, where they are the most productive duo alongside Torino’s Adem Ljajic and Andrea Belotti.

The most lethal partnership in the Bundesliga. Borussia Dortmund may have endured a disappointing season, but the potential of 19-year-old Ousmane Dembele and the consistency of Pierre-Emerick Aubameyang have been positives.

If they can keep hold of the striker then expect to see this duo feature prominently on this list for years to come.

Statistically the best partnership in Europe’s top four leagues, and it’s hard to argue with.

Luis Suarez’s stats since joining Barcelona are nothing short of astonishing, while what else is there left to say about Lionel Messi? And that’s without mentioning the third Musketeer…