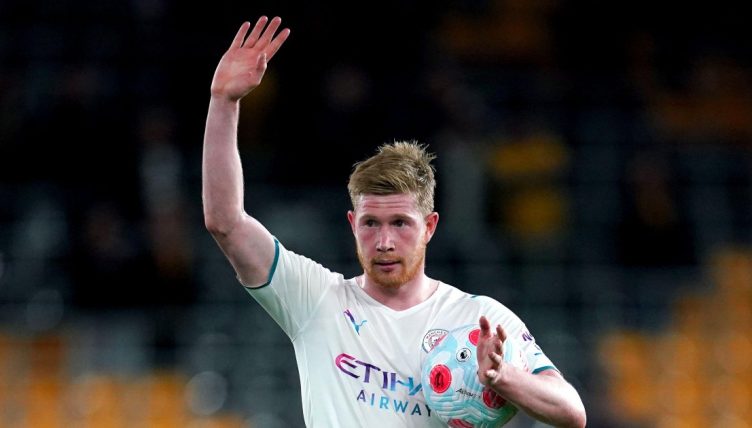 Manchester City star Kevin De Bruyne has been named the 2021-22 Premier League Player of the Season for the second time in his career.

The Belgium international has starred for a City side bidding to claim their fourth league title in five seasons, despite struggling to hit his usual heights in the campaign’s early months.

De Bruyne has come out on top in the fan vote ahead of other nominated players which included stellar names like Mohamed Salah, Trent Alexander-Arnold and team-mate Joao Cancelo.

He’s followed in the footsteps of Cristiano Ronaldo, Thierry Henry and Nemanja Vidic to become just the fourth player to earn this accolade twice.

“I think my performances this season have been good and I am happy that I have been able to contribute with goals and assists throughout the season,” De Bruyne said after winning the award.

“Thank you to all of the staff, coaches and especially my teammates because without them this wouldn’t be possible.”

We’ve taken a look at nine incredible stats from the 30-year-old’s campaign that show why one of Pep Guardiola’s most trusted lieutenants has been a cut above the rest in 2021-22.

– De Bruyne scored the first hat-trick of his Man City career in a must win league game away at Wolves in May inside just 24 minutes – the third-fastest in Premier League history. Sky Sports pundit Jamie Carragher labelled him “the greatest player to ever play for Manchester City” after this scintillating display.

Pep Guardiola on Kevin De Bruyne’s performance vs Wolves: “I’m so disappointed in him because he missed the fifth goal…” [via @footballdaily]pic.twitter.com/XvLvsdba4B

– The midfielder is his club’s leading goalscorer in 2021-22 with 15 Premier League goals as well as racking up seven assists.

– His 15 goals so far have amazingly come from an expected goals (xG) value of just 5.8 showing how he’s a clinical finisher.

– The Belgium international currently ranks fifth in the Premier League’s top scorer charts this term and is the highest-scoring midfielder in the division. Only forward players have registered more goals (Kane, Ronaldo, Son Heung-min and Salah).

– De Bruyne has either scored or assisted in 13 of his past 19 games (a goal involvement every 81 minutes over this period just beats his single-season best from 2019-20 – 85 minutes per goal involvement).

– He’s the only player to average over three shots and over three chances created per 90 minutes this season in the Premier League.

– According to SofaScore, he’s not missed a single “big chance” this season (by comparison, Kane has missed 18 and Salah 17).

– Only Alexander-Arnold and Bruno Fernandes have registered more key passes than De Bruyne (82) in 2021-22.