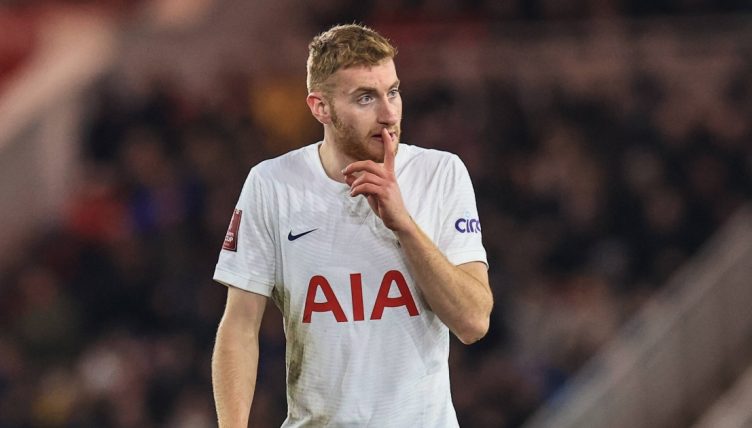 After a difficult spell at Juventus, Dejan Kulusevski has hit the ground running during his first two months at Tottenham.

Kulusevski fell out of favour under current Juventus boss Max Allegri before joining Spurs on an 18-month loan deal during the January transfer window.

The 21-year-old has been a revelation at Tottenham, establishing himself as one of the first names on Antonio Conte’s team sheet.

“Honestly, we are talking about an important prospect, because he is very young, only 21-years-old and despite his young age he has good experience with the national team,” Conte told Sky Sports in March.

“Also to play with Juventus for one year and a half, you understand what it means to live with pressure, with that pressure.

“We are talking about an important prospect. Probably he could explode in the future. Also because I can see the intensity, the will and the desire to play. As everyday in training sessions, he is a type of player who has it in his mind the target to become a top player in his career and as his manager I try to help him to improve and believe.

“For sure is he an important prospect for the present and for the future. He has to continue to work in this way because he has in one month and a half improved a lot physically, tactically and also in his mentality.”

– No player has assisted more Premier League goals than Kulusevski (6) since he made his Tottenham debut against Southampton in February.

– Since the start of 2022, only Harry Kane (15) and Son Heung-min (13) have registered more Premier League goal contributions than Kulusevski (9).

– With three goals and six assists in 11 appearances, the 21-year-old is averaging a direct goal contribution every 93.5 minutes in the Premier League.

🚨Tottenham Hotspur are expected to trigger Dejan Kulusevski's clause as early as possible and sign the winger for £25M this summer.

🇸🇪Kulusevski joined on an 18-month loan from Juve with an option to make the move permanent.

– He’s the only Under-21 player in Europe’s top five leagues to have recorded more than four direct goal involvements in the last two months.

– The winger is the first Under-21 player to register five or more assists in their first 10 Premier League appearances since Eden Hazard in 2012.

– Despite only making his Tottenham debut in February, Kulusevski has more Premier League goal involvements than Gabriel Martinelli (8), Jadon Sancho (6) and Romelu Lukaku (5) in 2021-22.