Dele Alli: The stats and highlights of an incredible career so far 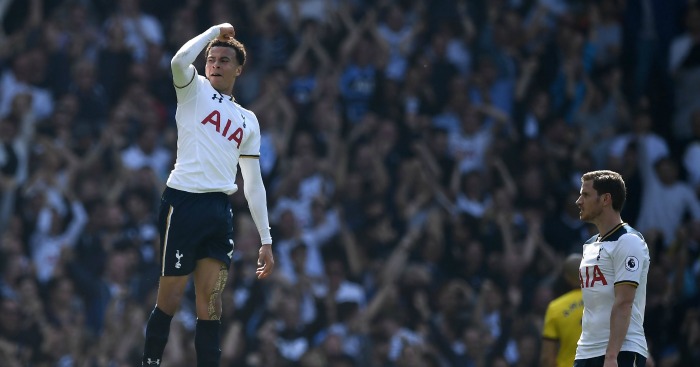 Today marks the day on which Dele Alli can now legally buy alcohol in the USA – but the Tottenham prodigy has long since come of age.

In his last appearance as a 20-year-old, Alli starred in Spurs’ 4-0 thrashing of Watford, the highlight of which was the midfielder’s brilliant long-range goal.

One statistic in particular has had people talking since the game, highlighting just how quickly Alli has settled into life in the Premier League since moving to White Hart Lane in a £5million deal from League One MK Dons.

With 40 combined goals and assists, Alli has been involved in as many Premier League goals before turning 21 as Frank Lampard (15), Steven Gerrard (13) and David Beckham (12) combined.

The England international may be operating in a slightly more advanced role than those players, but the figures remain staggering.

In fact, it is just one of a number of pertinent facts regarding Alli’s fledgling career.

Making his professional debut as a 16-year-old for MK Dons in 2012, Alli quickly started to generate a buzz with his performances in the third tier.

By 17 he had already scored his first professional hat-trick, while he also impressed a host of scouts in the Dons’ 4-0 victory over Manchester United in the 2015 League Cup.

Spurs won the race to land Alli in 2015, but he returned to MK Dons on loan and went on to help the side win promotion to the Championship, winning the Football League’s Young Player of the Year award in the process.

Alli broke into the Spurs first team the following season and has not looked back, despite jumping from the third tier to top-flight football.

In his second substitute appearance for the club he scored his first goal in a 1-1 draw at eventual champions Leicester, and his meteoric rise continued with an England debut two months later.

While some sections of the media questioned the fast-tracking of such an inexperienced player into the senior side, Alli proved he belonged on the biggest stage with his first international goal – one which displayed all his thrilling qualities.

A crunching tackle in midfield was followed by a driving run forward and an unstoppable strike past Tottenham team-mate Hugo Lloris in the France goal.

By this point Alli was flying and there was no doubting a player with such confidence and verve.

A new long-term contract signed in January 2016 was celebrated with a Goal of the Season contender against Crystal Palace.

With 10 goals in his debut Premier League campaign, Alli was named the PFA Young Player of the Year.

2015-16 may have ended in disappointment with Spurs and England, but it saw Alli take his game to another level.

A brace against Chelsea stopped the Blues’ 13-game winning run and was Alli’s third-consecutive double.

Of direct contributions to goals by players aged 21 or under in Europe’s top five leagues this season, Alli currently sits top of the list.

A chance conversion rate of  21.1%, meanwhile, betters those of Lionel Messi, Alexis Sanchez and Dries Mertens.

Alli’s strike against Watford brought him his 10th league goal of 2017, matching his tally for the whole of the 2015-16 season.

After the match, Spurs boss Mauricio Pochettino was glowing in his praise of the player.

“He’s special. He’s a bit different to all the players that play now at his age. He’s so experienced. His energy, his character, his quality. I think he is a unique player.”

And when asked whether the midfielder was the best young player in Europe, Pochettino said: “I think today, his age and with his stats, I think so. If not he’s the best, he’s one of the best for sure.”