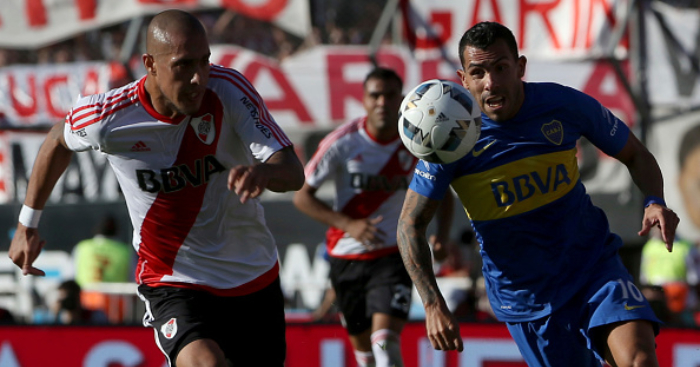 The Superclásico, the world’s fiercest derby, takes place this evening as Boca Juniors and River Plate go head to head in the 2018 Copa Libertadores Final.

Since both teams won their respective semi-finals, there has been a flurry of interest in the final.

Boca Juniors have received over 2,500 media accreditation requests for the first leg…for a game in a stadium with only 159 desks.

An argument between a Boca and River fan ended with one burning down the other’s house this week, while Zenit St Petersburg’s Leandro Paredes is alleged to have got himself sent off so he can watch the final while he’s suspended.

Tonight’s game holds particular weight. It is the last two-leg final of the Copa Libertadores and the first time Boca and River have ever played each other in the final in its 58-year history. Indeed, it is the first all-Argentine final.

Given Boca and River’s status as Argentinian powerhouses, many stars have passed through their doors. Here, we remember some of the greatest ever players to have played in the Superclasico.

‘El Diego’ had two spells at Boca, playing in seven Superclasicos. His first came in 1981, where he scored in a 3-0 win for Boca and his last came in 1997, which was also his last ever professional game of football.

Fittingly, that day he was substituted for a 19-year-old Juan Roman Riquelme, the player many saw as the playmaker’s natural successor.

READ: Seven reasons why Diego Maradona will always be known as one of the best

Often mentioned in the same breathe as Pele and Maradona as one of the world’s greatest ever footballers, Di Stéfano played for River Plate in the post-war years at the start of his career.

A highly competent goalscorer, who played for Argentina, Colombia and Spain internationally, Di Stéfano scored 55 goals in 75 games for River but would go on to win his first league title as manager with Boca.

One of the few players to cross the divide from River to Boca, the man who became known as ‘Batigol’ found the form that earned him a move to Europe in his only season at Boca.

He bagged himself a brace for them in a Superclasico against River in the group stages of the 1991 Copa Libertadores. That same year, he was signed by Fiorentina and went on to establish himself as one of the game’s most feared strikers.

Boca’s all-time top goalscorer is a true legend at La Bombanera. The centre-forward was a constant thorn in the side for River Plate, with Palermo netting nine times against them.

While he struggled to make an impact in Europe during a spell in Spain, on his return to Boca in 2004 he added a further 145 goals to his tally, taking his total to an eye-watering 236.

One of several Argentinians to play in the Superclasico and El Clasico, Mascherano came through the youth ranks at River Plate and made his professional debut for them in 2003.

In the 2004 Copa Libertadores, River reached the semi-final but lost on penalties to Carlos Tevez’s Boca. The pair would, of course, memorably sign for Alan Pardew’s West Ham two seasons later.

Now in his third spell at Boca, after returning from China, there will be few relishing the opportunity to get one over on River more than Carlos Tevez.

The stocky striker’s most infamous Superclasico moment came in 2004, when the two sides faced off in the Libertadores semi-final.

With five minutes to go, Tevez scored to give Boca an 2-1 aggregate lead. He celebrated with a chicken dance – a reference to River being gallinas (chickens) because they were known for ‘choking’ at the last minute – and was subsequently sent off.

Riquelme was a boy wonder at Boca, cast in the mercurial playmaker role as a natural successor to Maradona. He endured a difficult move to Barcelona and was more loved at Villareal but always played his best football in Argentina.

Over two spells at the club, Riquelme won three Libertadores and put countless smiles on fans’ faces. He retired in 2015.

A prolific goalscorer for Porto, Atletico Madrid and Monaco (the less said about Manchester United and Chelsea, the better), Falcao made his name at River Plate.

Ranking the best Argentines to play in the Prem: Aguero, Tevez, Mascherano…