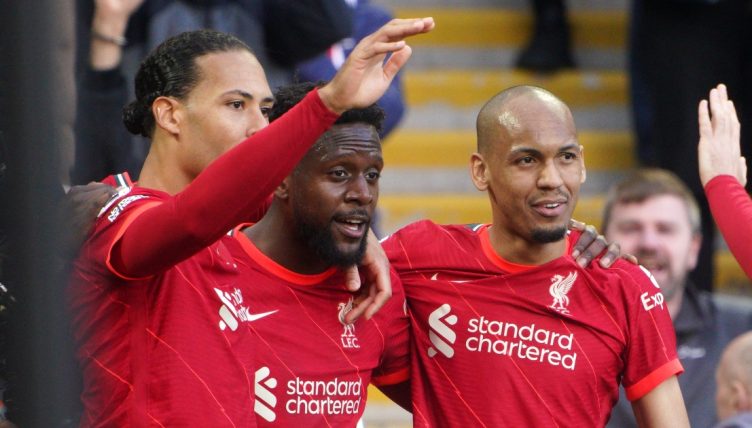 ‘Where do you want your statue, Divock Origi?’ was Jamie Carragher’s line from the commentary box as the Liverpool cult hero came up with yet another big moment in their 2-0 victory over Merseyside rivals Everton.

Origi was introduced at the hour mark as a nervy and feisty Merseyside derby remained scoreless, with Liverpool needing to take three points in order to keep the pressure on Manchester City at the top of the Premier League table.

And, as he’s done so often before, the Belgian attacker proved a thorn in Everton’s side. Within two minutes of his introduction, he came up with the pre-assist with his very first touch, for Andrew Robertson’s deadlock-breaking goal.

In the closing stages, he put the result to bed with his sixth goal against Everton, heading in from close range after a bicycle kick from fellow substitute Luis Diaz teed him up. Only Steven Gerrard has scored more Premier League goals against Everton for the Reds.

“We will never miss a player like him because if he leaves, he will explode wherever he goes. He is a world-class striker, he is a legend and will stay a legend forever,” Jurgen Klopp told Sky Sports after the victory.

“He doesn’t always make the squad which is ridiculous, but he is there when we need him every time. He was involved in both games; everything that we did in the second half, without Divock, wouldn’t have happened.”

The striker himself appears likely to leave Anfield when his contract expires at the end of the season, but his six goals against Everton ensure that he’ll always be remembered as a Kop hero by the Liverpool fans.

“It’s a nice record [against Everton]. Today we needed it, and in the end we got the three points which is the most important thing,” Origi told Sky Sports in his post-match interview.

“I think it was my first touch, yeah [in the build-up to Robertson’s goal]. We had to work hard to win – we know all the games are tough. It’s a good feeling because we have some momentum, but we have to keep focussing.”

Here are the best reactions on Twitter to Origi ruling the Merseyside derby once again.

Anfield asked for him, Klopp give him to them…He Delivered !!@DivockOrigi @LFC 2 vs 0 Everton

Divock Origi is a hero. So much harder than people think to make a difference when you barely get any minutes. Never moans, always turns up when it matters.

Divock Origi is an absolute chaos agent in close games and I mean that as the highest praise.

Origi off the bench in the derby then. pic.twitter.com/P2UCLZVSmU

He’s a titan of the game for all sorts of reasons, but Divock Origi has genuine big game temperament. Nothing phases him. You could release him from 3,000 years of cryogenic freezing, and without a blink he’d just slot unfussily off the shoulder of the last man.

Origi rattles this team like nothing I’ve ever seen. Go on big man.

Has a whole scholarship for Liverpool-born students to afford university but my god does he like bullying the Blue side of the city.

Big big win after an awful first half. Good subs at perfect times.
Origi is a legend ❤️😎
Well done for being strong @LFC .. was a difficult game . pic.twitter.com/hdNRbnadLW

Divock Origi when he comes off the bench pic.twitter.com/FTSSCJUmrV

Divock Origi!! The man for the big day! Valuable goal after valuable goal for Liverpool FC.

Wasted a full half of football trying to be clever, just for the man, the myth, the legend, Divock Origi to help send them down. Beautiful.

One day we'll learn what Everton did to Divock Origi

DIVOCK ORIGI IS A LIVERPOOL LEGEND